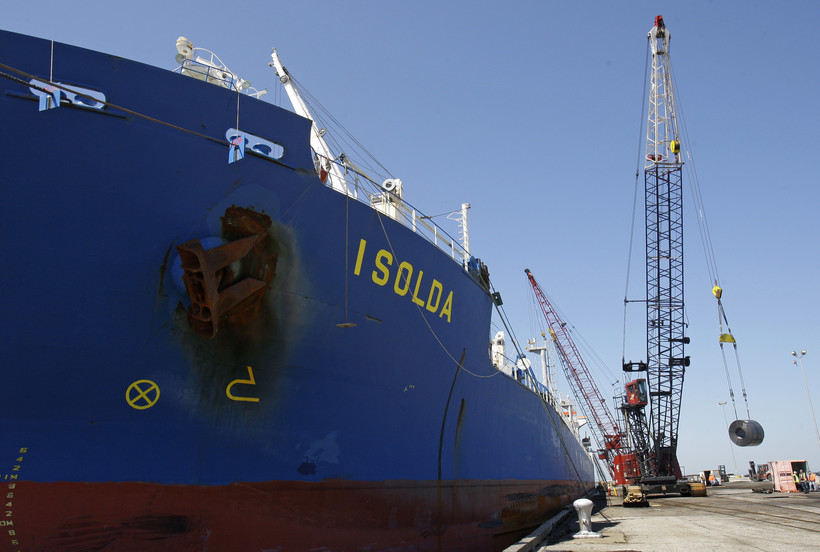 In this file photo, steel is unloaded from the Isolda at the Port of Cleveland on the shores of Lake Erie Wednesday, April 13, 2011, in Cleveland. Tony Dejak/AP Photo

A United States-Canadian agency that oversees Great Lakes water levels says it will continue to give a board flexibility in how it’s managing outflows on Lake Ontario. Officials there are hoping to lower lake levels to reduce the risk of flooding, but the shipping industry fears increased flows will effectively shut down shipping on the St. Lawrence Seaway.

Politicians and residents have been pushing for higher flows to release more water from Lake Ontario as it’s seen record-breaking levels this year. The state of New York has set aside $300 million this year for communities impacted by shoreline flooding and sued the International Joint Commission, alleging it failed to act.

The International Lake Ontario-St. Lawrence River Board has been able to increase flows as part of regulating water levels on Lake Ontario. Now, the commission is allowing it to continue to deviate from its water regulation plan even as water levels drop.

The board is trying "to get as much water off of Lake Ontario as possible," said Andrew Kornacki, the board’s communications officer. Even so, he said officials are planning to keep flows about 200 cubic meters per second more than rates considered safe for commercial navigation until the shipping season ends.

"Nothing is off the table at this point, but one of the things we always do is we communicate with all the stakeholders to understand exactly what those impacts are that are being felt," said Kornacki.

The shipping industry fears any increase in flows may make navigation unsafe and effectively shut down the season. The end of commercial navigation would halt the movement of goods and result in broken contracts, said Deb DeLuca, executive director of the Duluth Seaway Port Authority.

"Our own community has been affected by flooding and storm damage, so we do share those concerns about high water levels," said DeLuca. "However, if you’re affecting a very minor change in water levels and you’re already seeing the economic damage that’s done to the property owners, all you’re doing is exacerbating the economic damages by affecting the shipping industry by halting it."

About 75 percent of the grain that comes through the Twin Ports goes out for export through the seaway, DeLuca said. The Chamber of Marine Commerce said a shutdown could cost the U.S. and Canadian economies $193 million per week.

The commission’s Frank Bevacqua said the current outflow strategy has removed a tremendous amount of water from Lake Ontario, which is down about 3 feet from its peak in June.

"This year, we have seen record inflows to Lake Ontario and the St. Lawrence River. Under those conditions, the best that any management plan for the outflows can do is to reduce the peak flows and the flooding impacts," Bevacqua said. "That was accomplished this year. The lake peaked 14 inches lower than it would’ve without regulation, and the impact downstream is a lot less than it would’ve been."

Yet, he acknowledged increased flows would provide a modest decrease in water levels of less than an inch to 2 inches, adding that no regulation plan can prevent flooding when inflows are high.

"But, of course, every little bit helps," he said.

The board’s Kornacki noted officials are looking for potential opportunities to increase outflows from the lake between the shutdown of the shipping season and the formation of ice on the upper St. Lawrence River.