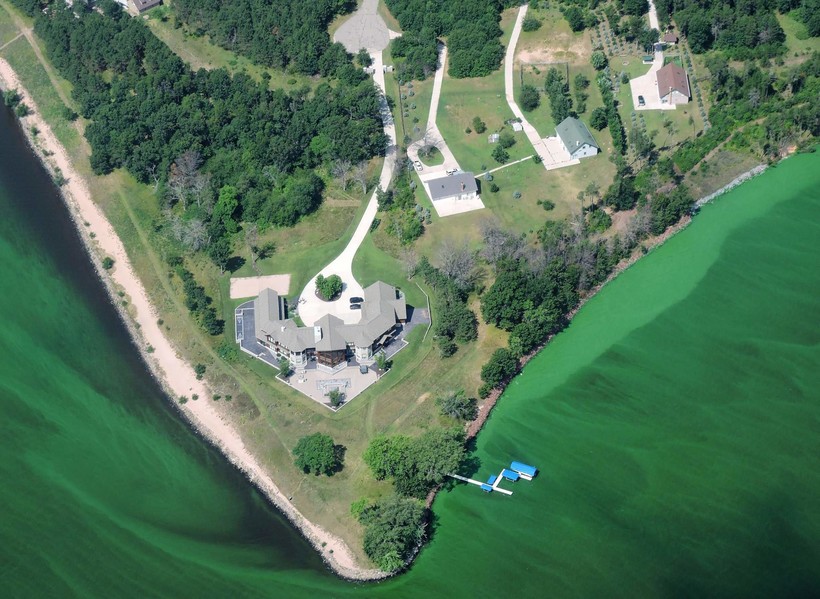 Petenwell Lake is among several lakes in the Wisconsin River basin that have been proposed for site-specific phosphorous criteria. Photo courtesy of Rhonda Cain-Carrell

The DNR determined the three lakes needed revised criteria to meet water quality goals for recreation. Phosphorus runoff from farms and urban areas has contributed to excessive algal blooms, which can sometimes produce toxins that make animals and people sick.

"All three lakes are too high right now. We need to make reductions, but it’s a matter of what concentration in a lake is going to allow us to recover essentially — to not have the algae problems," said Marcia Willhite, the agency’s water evaluation section chief.

The DNR is suggesting less restrictive standards on Petenwell and Castle Rock lakes in Adams, Juneau and Wood counties. At the same time, it would require more restrictive phosphorus standards on Lake Wisconsin in Columbia County.

But, the DNR says Petenwell and Castle Rock can meet phosphorus reduction goals at 53 and 55 micrograms per liter respectively.

"That would reduce the algae to levels that people would be willing to swim and recreate in, but with Lake Wisconsin we found the opposite," said Willhite. "Lake Wisconsin was meeting its statewide standard of 100, and we have algae problems. So, we know that’s not the right standard to prevent algae from being excessive."

Lake Wisconsin would be required to reduce phosphorus levels to 47 micrograms per liter to improve water quality.

There are 109 municipal and industrial facilities that would be impacted by the new criteria under permit. However, the DNR says many are already — or soon will be — meeting limits. The remaining 36 facilities are expected to save around $180 million over 20 years while a dozen will see costs grow by $16.5 million over that time, according to a DNR memo.

The Wisconsin League of Municipalities has been supportive of a site-specific approach to meet water quality standards, according to deputy director Curt Witynski.

"We’re pleased that DNR was trying this. We think it offers some more flexibility and some cost reduction on compliance on our end," said Witynski.

There are 19 municipal plants that will see a savings of around $93 million over 20 years, but 10 facilities will see costs increase by about $9 million over the same time period. Witynski said it’s a challenge for communities across the state to meet phosphorous standards, noting they’re seeking as much flexibility as possible to comply.

Rick Georgeson, president of Petenwell and Castle Rock Stewards, has been working with groups in the area to prevent phosphorus runoff into the lakes. He said the less restrictive standards on Castle Rock and Petenwell lakes may seem like a more achievable goal to those affected.

"We might’ve got more partners that will be less apt to drag their feet," said Georgeson.

However, he said people are willing to work together to solve the problem.

"Everybody wants improved water quality," he said. "They want to swim. They want to fish, and they just think it’s the right thing to do."

Georgeson and others have been working to reduce phosphorus through runoff from urban areas and agriculture. John Eron is the lead farmer with the Farmers of Mill Creek Watershed Council, which is a farmer-led group that’s promoting conservation practices to prevent runoff and reduce phosphorus pollution.

Eron said no-till farming and cover crops have been key components to reduce soil erosion from fields, especially during frequent and heavy rains.

"Obviously, by having covers and things like that, that really helps keep that to a minimum," said Eron.

Ken Schroeder, an agriculture extension agent for Portage County, works with the group to encourage such conservation practices, as well as the use of buffer strips on fields. He said the council has a goal this year of planting around 700 acres of cover crops with around 1,000 acres of no-till fields, but he notes the wet weather this year has made it difficult to establish them.

Yet, he said cost-sharing through grants from the Wisconsin Department of Agriculture, Trade and Consumer Protection has allowed farmers to experiment with such practices without much financial risk.

"The economy in farming hasn’t been good for a while now so it gets difficult to adopt new practices and spend money that they wouldn’t otherwise," said Schroeder.

Local governments hope to see more work with lawmakers and the ag community to advance practices that reduce water quality impacts and the need for costly treatment, Witynski said.

The site-specific criteria for the three lakes still has to be approved by the Legislature, Gov. Tony Evers and the EPA before they take effect. The DNR hopes the standards will reach the EPA for approval sometime next spring.