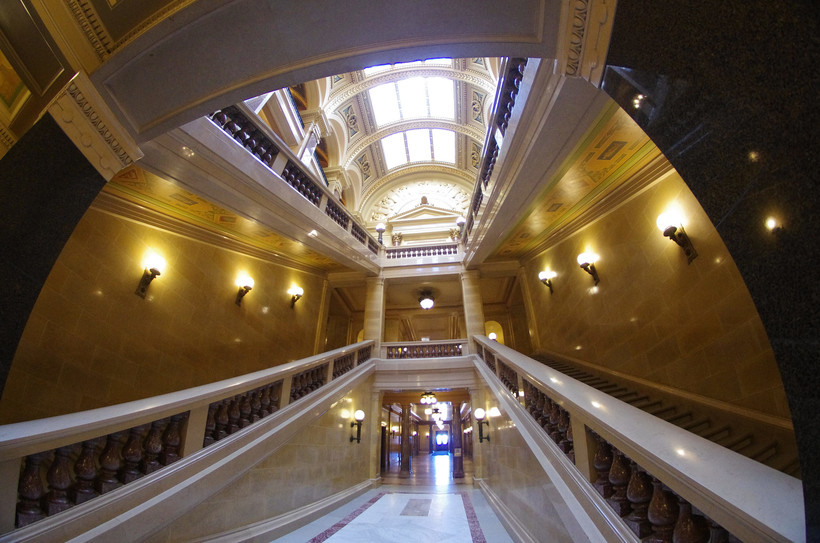 Bills Are Part Of A Marathon Session As Republicans Rush To Adjourn For Rest Of The Year
By Shawn Johnson
Share:

It would be easier for developers to fill wetlands in Wisconsin under a bill the state Senate sent to Gov. Scott Walker's desk Tuesday.

The plan was part of a lengthy list of bills senators plowed through Tuesday, which Sen. Majority Leader Scott Fitzgerald, R-Juneau, said will be one of only two remaining days his chamber will meet in 2018.

Here are some highlight's from Tuesday's Senate action:

The wetlands bill that passed the Senate has been scaled back from the version GOP lawmakers introduced last year, but it would still allow developers to fill some state wetlands without permits.

State wetlands cover about 1 million acres in Wisconsin. Unlike federal wetlands that are adjacent to lakes and rivers, state wetlands are typically isolated swamps or bogs.

The bill Republicans passed on an 18-14 party-line vote would treat wetlands in urban and rural areas differently.

In urban areas, landowners could fill state wetlands up to an acre in size without a permit from the state Department of Natural Resources. If they fill about a fifth of an acre or more, they would have to mitigate the damage by restoring or creating new wetlands somewhere else.

In rural areas, landowners could fill state wetlands up to three acres in size without a permit from the DNR. If they fill 1.5 acres or more, they'd have to mitigate.

Rare state wetlands or those adjacent to a Class I or Class II trout stream would still be protected under the bill.

"Some day, we will regret it," said Janis Ringhand, D-Evansville.

Sen. Roger Roth, R-Appleton, said most Wisconsin wetlands would remain under state or federal protection, but said his bill would make it easier for farmers and other landowners to fill smaller wetlands.

Flooding, Roth said, would happen whether the bill passed or not.

"There are some forces that are outside of human control," Roth said.

The plan has broad support from Wisconsin's business lobby, while a number of environmental groups oppose it.

The bill passed the Assembly last week, with four Republicans joining all Democrats in voting against it.

Senators could also send another bill to the governor's desk that would prohibit state workers’ health insurance plans from covering abortions, except in specific circumstances.

The bill would ban Wisconsin's Group Insurance Board, which offers health insurance for state employees, from providing insurance that covers abortion procedures, except abortions that result from rape, incest, or are deemed medically necessary to save the life of the mother.

Anti-abortion groups support it, while a variety of health care groups are opposed, including the Wisconsin Medical Society.

It passed the Senate on a party line vote without any debate.

Another bill that passed the Senate on a bipartisan vote would restrict the power of police to seize assets from people who are suspected of committing crimes.

Backers argue police should only be allowed to seize property from convicted criminals, and that going beyond that is a violation of civil liberties.

The plan by Sen. Dave Craig, R-Big Bend, would scale that power back.

For example, it would put a time limit on how long police can hold property before someone is charged and reduce the amount of money police can keep when they sell seized property.

Craig said it strikes a balance that still gives police the tools they need.

"And then to also make sure that we support and defend the state of Wisconsin Constitution and the Bill of Rights, federally," Craig said.

The measure passed on a bipartisan 22-10 vote with four Democrats joining Republicans to vote yes. It now moves to the Assembly.

People with life-threatening diseases would be allowed to try some experimental drugs under a so-called "right to try" bill approved Tuesday.

The measure is similar, but not identical to a bill that passed the Wisconsin Assembly almost a year ago.

The Wisconsin Medical Society opposed that Assembly bill, arguing that if enough patients try experimental treatments, it could slow down research on drugs that work.

But the Medical Society said that it's officially "neutral" on the plan that passed the Senate.

Senators also approved key pieces of Walker's 2018 agenda, including a plan that would pay private insurers government funds to help pay for the most expensive patients, as well nine bills that would restrict access to public safety net programs like FoodShare.