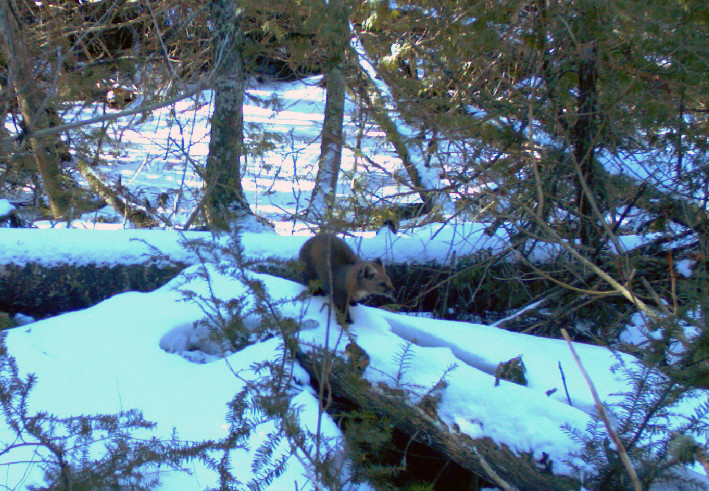 A camera trap captured this photo of an American marten on Bear Island in the Apostle Islands National Lakeshore.

Scientists Seek To Solve Marten Mystery On The Apostle Islands

Spotting the American marten in Wisconsin is no easy task. So, it’s no surprise that park officials at the Apostle Islands National Lakeshore initially doubted what they were seeing when visitors shared photos of the mammal that's endangered in the state.

"In 2010, this photo was taken and it was just said, 'Well, that’s a fisher,'" recalled Ken Pemble, cultural and natural resource technician with the park. "Nobody expected there to be martens so you’re not looking for them. (But in) 2015 we look at that photograph again and it was definitely a marten."

The small, rare member of the weasel family was completely wiped out in Wisconsin during the early 20th century as the result of trapping, habitat loss and wildfires. The state began a program to bring back the marten in the 1950s when state conservation workers reintroduced a handful of animals on the Apostle Islands.

That attempt was believed to be a failure until visitor photos surfaced and researchers captured shots of the marten with camera traps on the islands.

"We just coincidentally had a carnivore project going on," said Erik Olson, associate professor of natural resources at Northland College in Ashland. "That then documented them on Stockton Island. That led to a whole bunch of questions: Where are they in the islands? Where do they come from and what’s the relative abundance across these islands?"

Now, students and researchers at Northland College and the University of Wisconsin-Madison are working with the National Park Service, as well as state and tribal agencies, to solve that mystery on the Apostle Islands.

Olson and his students have been maintaining camera traps and collecting scat in the park to see how far the martens' reach extends. So far, they’ve found martens on at least seven of the 21 islands within the Apostle Islands National Lakeshore. 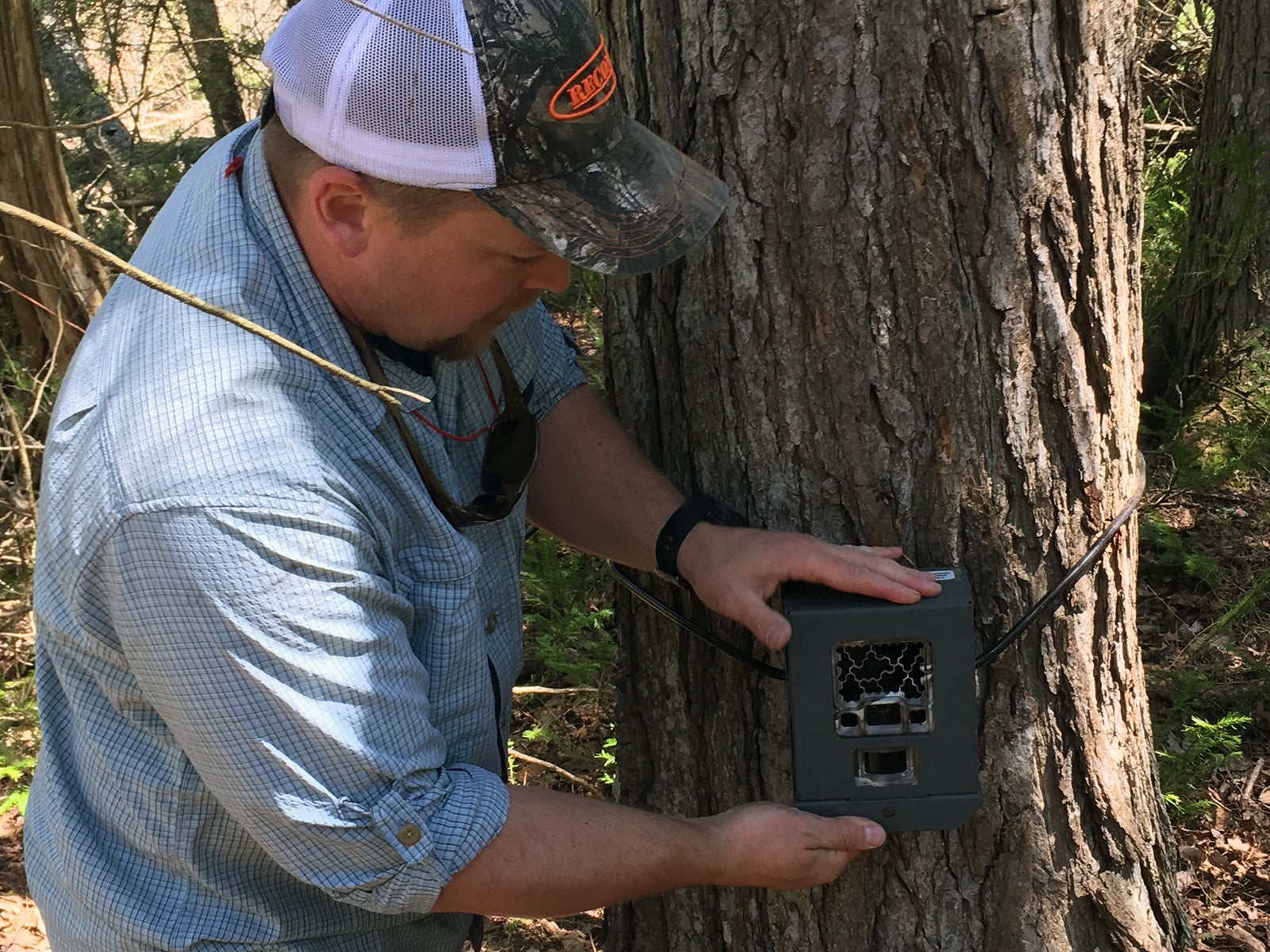 The trips often mean hikes through difficult terrain as a number of the islands are covered in thick underbrush and downed trees. But, Olson said that’s just the kind of habitat the American marten prefers.

"The shrub layer here is really abundant and that’s partially because of the history of deer browse out here … there’s been very little deer browse out on these islands," he said, referring to types of foliage deer typically eat. "You have things like white cedar saplings, white hemlock saplings and Canada yew – species that deer normally feed on pretty heavily – especially during the winter. They’re relatively abundant out here on these islands. You don’t see anything like this on the mainland really."

Olson said the habitat on the islands may be one reason why martens seem to be doing well in the park.

"It’s kind of wild to think about the fact that there may be a decent-sized population out in this Apostle Islands area. And how they’re related with the mainland marten is that big question, what their origins are," he said.

Researchers will extract DNA from scat and hair samples to try to answer that question. This fall, UW-Madison began a four-year project to find out whether martens on the Apostle Islands are relatives of those that were introduced in the 1950s. It’s also possible the animals came from a group of martens that were reintroduced into northern Wisconsin's Chequamegon-Nicolet National Forest, according to Jon Pauli, assistant professor in the Department of Forest and Wildlife Ecology at UW-Madison.

"We have this … place now that, cryptically, sometime from somewhere has been populated, been colonized," said Pauli.

Pauli said they hope to understand when and how the martens arrived on the islands, how many exist and whether the population of martens on the islands is any different from the population in the Chequamegon-Nicolet National Forest — where the UW-Madison professor has been studying marten populations. Since the 1970s, around 200 marten have been introduced in both the Chequamegon and Nicolet portions of the national forest.

"Unfortunately, the Chequamegon doesn’t seem like there’s a whole lot of martens and it seems like because it’s a small population size it’s really susceptible to disappearing," said Pauli. "It’s not necessarily super viable."

He said the Nicolet side appears to have more martens, and they’ve been learning more about their origins. Learning more about martens in the Apostle Islands could reveal a lot about recovery efforts in Wisconsin, according to Pauli.

"It’s a really important and interesting comparison," he said. "If we can maybe understand why the marten on the Apostle Islands appears to have grown and be doing apparently OK, what the differences then are from that system to these other places where growth hasn’t been nearly as sharp."

Those are important questions for people who want the species to thrive. The marten is a clan animal for Ojibwe tribes, according to Jonathan Gilbert, a biologist with the Great Lakes Indian Fish and Wildlife Commission.

"In Ojibwe society, their families are divided into various clans, and each clan has a role and a responsibility within the Ojibwe society. The marten clan is the clan of the warriors. These are the people that would defend the village from invaders," he said. "They’re the hunters in the village going out, gathering food and providing it back to the people in the village and the protectors of that village. As a clan animal, they are revered in that way."

The animal’s success could also have economic implications for Wisconsin. In other states, martens are trapped for their fur, according to Jim Woodford, section chief in the natural heritage program with the Wisconsin Department of Natural Resources.

"There’s martens across the northern hemisphere, and they’re known as sables in Russia. They’re a very important fur-bearer from our trapping heritage, and they’re one of the most widely trapped fur-bearers in the world," said Woodford. "There’s an economic reason to recover them in the state. That’s one of our long-term goals."

Meanwhile, Northland College's Erik Olson has his own goal in mind. Despite years of tracking the animal’s movements, he still hasn’t seen the marten with his own eyes.

"I think my first instinct would be to try to take a picture or a video of it," he said. "But, I think after I thought about it, maybe we just need to kind of watch the animal for a while."