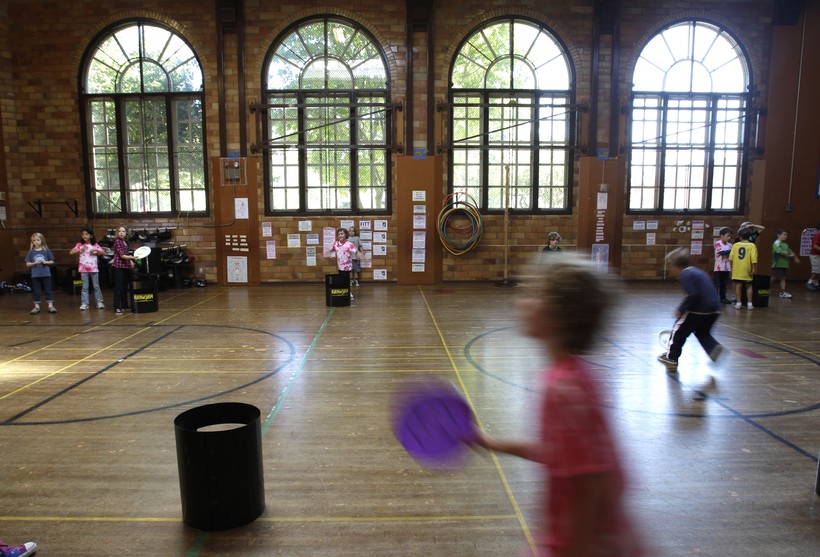 Students take part in a PE class, Thursday, Sept. 30, 2010, in a gym at the Salmon Bay School in Seattle. Ted S. Warren/AP Photo

As a new report confirms childhood obesity shows no sign of diminishing, physical education is losing status as a priority in schools, says Pam Massey, professor of health, exercise science and athletics at the University of Wisconsin-Fox Valley.

In many states across the country, schools allow exemptions and waivers from physical education classes, and funding for PE averages a mere $764 per school, per year, according to a 2016 survey from the Society of Health and Physical Educators.

"We see so many students struggling with the obesity rates rising and Type 2 Diabetes in younger kids rising," Massey said. "They’re getting these health issues we typically used to see in older adults and it’s directly related to less activity and not eating properly."

Rates of childhood obesity have been rising for decades. In 1999, fourteen percent of children aged 2 to 19 were obese, in 2016 that number rose to 18.5 percent, according to the most recent analysis by the Centers for Disease Control and Prevention.

The benefits of physical activity are conclusive and researchers have found it’s not only good for the body, but also promotes self-esteem and can even sharpen concentration and boost academic performance.

That’s why Massey struggles with many schools’ current approach of prioritizing academics over physical education and activity.

In 2016, only 21.6 percent of children and adolescents aged 6 to 19 met the recommended 60 or more minutes of moderate-to-vigorous activity at least five times a week, according to the CDC.

"A lot of that is related to the standardized testing happening now," Massey said. "A lot of the focus in the classroom is to prepare these students for those tests. Unfortunately PE is being cut because of that."

In the last 5 years, 38 percent of teachers have seen a drop in secondary school PE as a direct result of exam pressures on teenagers, according to research from the UK-based nonprofit Youth Sports Trust.

"That’s the main issue now," Massey said. "There’s so many different academic programs put on the teachers that there’s not enough time in the day. So the teachers unfortunately take it away from PE."

But Massey says overloading students with a rigorous academic schedule without a break for physical activity can actually hold back learning.

"You see it in getting kids up and moving around, it helps increase their concentration, which in turn helps get some of those better test scores," she said. "Where if you just have students sitting all day, not moving, that’s not good for anybody."

Despite these cuts, Massey sees some improvements in the physical education being offered at schools — and also room for growth.

"A lot of the younger teachers ... there is the push for physical activity and health," she said. "So you’re looking at the student’s overall health and wellness. Traditionally, people just think of gym class as playing a game."

That comes with teaching students from a young age that not only physical activity, but also nutrition, is important throughout their life. And PE class is the perfect setting for that, she said.

"Nutrition is key," Massey said. "It's starting to teach kids at the elementary-level what they should be eating, how much they should be having, what’s a balanced diet and listening to cues from their body."

Then comes the fight to inspire kids who hate gym class to enjoy it.

Massey believes educators can do more to make physical education a more welcoming, and less competitive, environment for students.

"It’s important as PE teachers that when we create courses, to have modifications and different options for students within the class … let them work at their own pace so they can see some success and they can see themselves improving," she said.

Massey would like to see schools dedicating at least 30 minutes to physical education three times a week. Part of that can be recess time, but those minutes have also seen cuts in recent years.