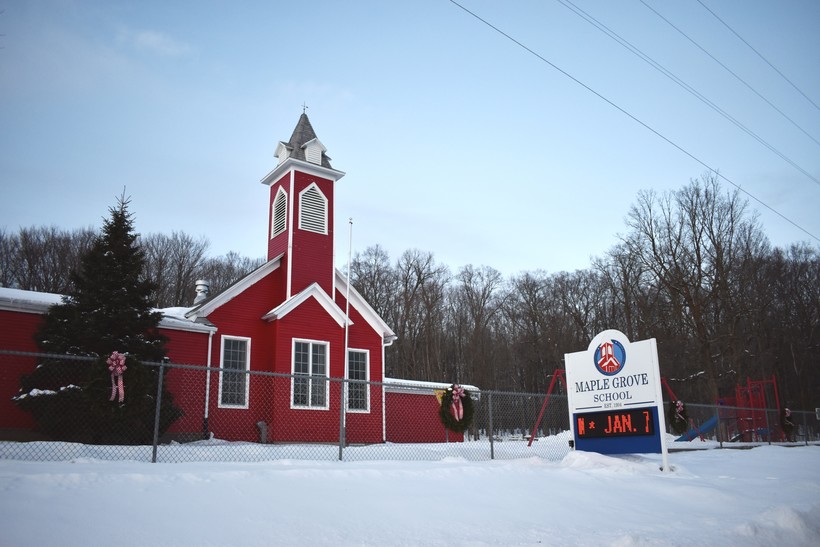 Maple Grove School in rural Marathon County has operated since 1904. The Merrill School Board is moving to close the school and consolidate its elementary schools. This photo was taken Tuesday, Jan. 7, 2020. Rob Mentzer/WPR

A unique rural school that's served Wisconsin students for more than a century may close for good.

At an emotionally charged and sometimes heated public listening session Tuesday night, the Merrill School Board described its plan to close Maple Grove School, an elementary school in rural Marathon County that has operated since 1904.

"The defense of this property will be endless," attendee Peter Fromm Wade told the school board. "The defense of Maple Grove School will be perpetual."

A presentation by district Superintendent John Sample and finance director Brian Dasher showed estimated savings of about $550,000 in the next two years. The district says it needs to consolidate schools due to a trend of declining enrollment and as a way to make new investments in instruction for students. For example, money saved by closing the school could go to hire school social workers and instructional coaches in reading or math.

To parents and community members, these trade-offs don't account for the full picture. Community speakers repeatedly spoke about taking their kids out of the Merrill district if Maple Grove were to close and using open-enrollment to send those students to neighboring districts.

The move is complicated by the school district's contract with Maple Grove, which has operated as a public charter school since 2012. That contract is through June 2022, and the school's governance board has indicated it is willing to fight in court if the district seeks to close the school this year. At a meeting Monday, the governance board voted to explore the possibility of detaching from the Merrill Area Public Schools and joining the nearby Athens School District.

The fight over the proposed closure of a rural elementary school is one that has played out in different forms across Wisconsin, as rural populations decline and local districts are forced to stretch education budgets.

According to data from the state Department of Public Instruction, since 2011, 71 schools in rural areas have closed. Forty of those were elementary schools. In north-central Wisconsin, the Antigo School District closed three rural schools at the end of the 2019 school year as it made plans to centralize services in the city of Antigo.

But Maple Grove, situated on a hilly road southwest of Merrill, has a long history entwined with the region.

It has an endowment from one of the Fromm brothers, whose business, Fromm Brothers Inc., pioneered ginseng cultivation in Marathon County and gained international fame and fortune as furriers raising silver foxes. Peter Fromm Wade, a Maple Grove advocate who spoke at Tuesday's meeting, is a descendant of the family. The endowment funds a college scholarship for Maple Grove students, and the school's history in the community is part of what residents value about it. 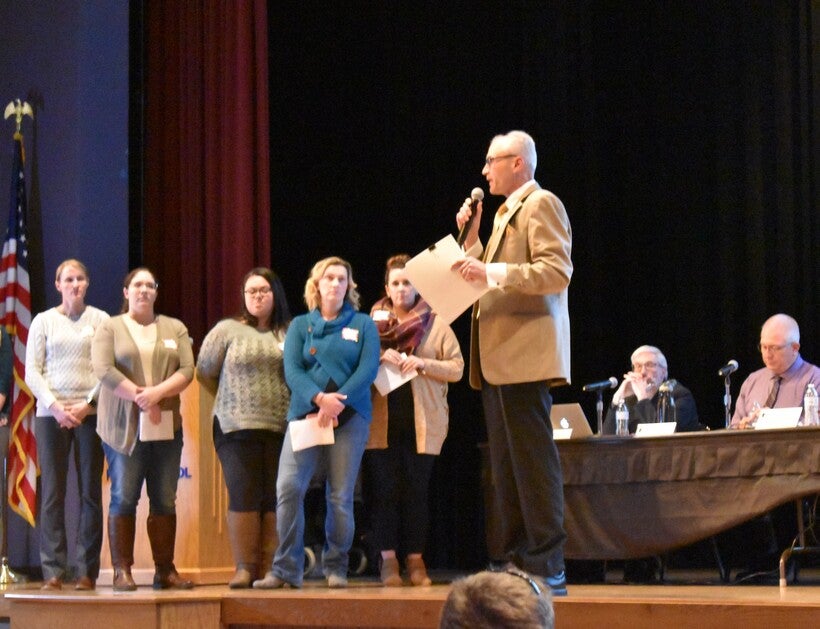 Peter Fromm Wade, center, speaks out against the closure of Maple Grove School at a public listening session of the Merrill School Board. Rob Mentzer/WPR

Angie Servi attended Maple Grove when she grew up in the Marathon County town of Hamburg. Today she has two kids at Maple Grove and one who would enter kindergarten next year. Servi is the president of the Maple Grove Governance Board.

She said it "seems like the situation we're talking about is a no-win situation," with a proposed closure that could lead to a legal battle and further bad blood between parents and district leaders.

Servi, an advocate of the school detaching from Merrill and joining Athens, told WPR she hopes there's a way to keep the school open that would benefit both districts. State statute would require both Merrill and Athens to agree on the detachment.

"I don't know if it's possible, but it's something we definitely want to explore," Servi said.

Trina Lutzke, another Maple Grove parent and member of the school's governance board, told the school board that rather than consolidating and adding instructional staff at other schools, it should be studying Maple Grove's culture and finding ways to replicate it across the district.

"The reasons I send my kid to Maple Grove is because it saves them from the very things you guys are attempting to (address) by adding more staff," Lutzke said. "The Maple Grove culture, the thing that we should be preserving, is what's being taken away."

The school's curriculum is built around "exploratory learning." Alongside traditional subjects, its 80 students maintain trails in the forest, tap maple syrup, compost and raise chickens.

According to DPI, the school meets academic expectations. Its 2019 accountability rating of 70.3 exceeds the Merrill school district's overall score of 66.8.

The Merrill Area Public School District in recent years has had about a 4 percent decline in enrollment, according to state data, from 3,431 students in 2014-15 school year to 3,291 in the 2018-19 school year. District officials said future projections show greater district-wide declines. Maple Grove's enrollment was 91 students in 2014-15, but has been essentially flat at around 80 students since 2015.

As to the potential financial impact, Dasher acknowledged at Tuesday's meeting that many of the district's figures were estimates. The potential lost revenue if families use open enrollment to join other districts would be as much as $666,250 if all of Maple Grove students left the Merrill district, which would wipe out the short-term savings that come from closing the facility.

"We're not going to know the full impact of this," Dasher said, "until after the decision is made."