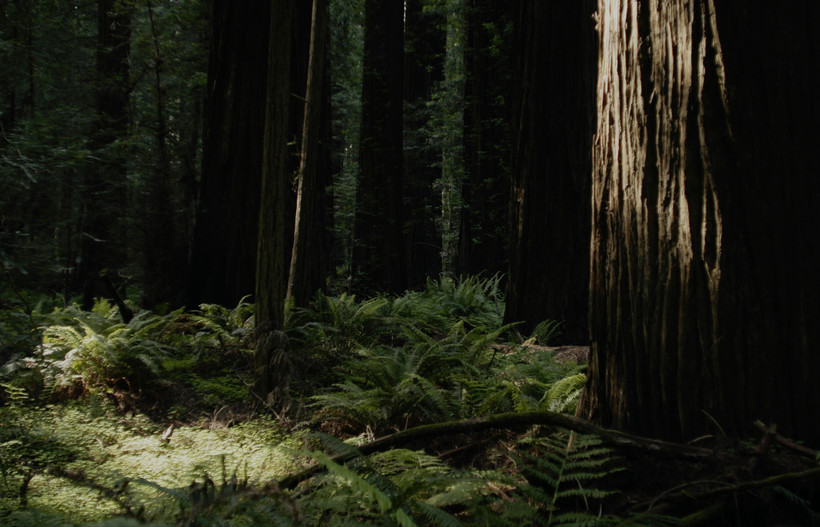 A still from the docuseries "Sasquatch" shows the depths of the Northern California woods. Photo courtesy of Hulu

'Sasquatch' Explores 'Monsters Among Us'

Director Joshua Rofé remembers exactly how he became the director of the new Hulu docuseries, "Sasquatch."

In February 2018, a friend told him about a podcast that he thought Rofé should listen to. The podcast, “Sasquatch Chronicles", features people sharing stories about their encounters with the legendary creature also known as Bigfoot.

"To be honest with you, I wasn’t interested when he mentioned that. But he pushed. And so I listened to an episode," Rofé told WPR’s "BETA." "And then cut to four days later, and I'd listened to 11 episodes."

Rofé was really struck by the "authentic, visceral fear that was being expressed and experienced by these people who were calling in with their Sasquatch encounter stories." Over the next week, he had a conversation with himself in which he decided his next project was "going to be Sasquatch-centric in some way."

But while Bigfoot documentaries are pretty standard TV fare, Rofé thought that if he could add another angle, he might be onto something special. So he reached out to his friend, gonzo investigative journalist David Holthouse.

"He's the guy to reach out to if you're looking for a wild story," Rofé explained. "So I sent him a text and the text literally said, 'Hey, this is the craziest text I'm going to send you for the next five years. I want to find a murder mystery that is somehow wrapped up in a Sasquatch story. And if it exists, pursue it as the next project.' And he wrote me right back and he said, 'I love it. I got one. I'll call you in five.'" 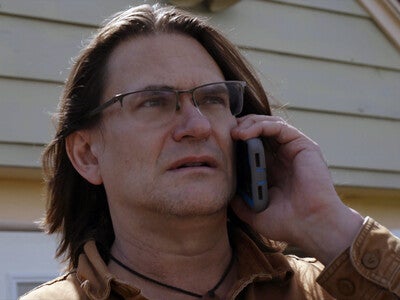 Investigative journalist David Holthouse tracking leads on his phone in a scene from the docuseries "Sasquatch". Photo courtesy of Hulu

Holthouse told him about the fall of 1993 when he was a young reporter who needed a change of scenery for a while. He reached out to a friend working on a cannabis farm in Northern California who invited him to come out and join him.

"And so when David got there, he thought he was going to be arriving at a pretty mellow, relaxing location to let things calm down for a week," Rofé explained.

“It was a terrifying energy that was in the air from the moment he arrived and on David's second night there, he was in an A-frame cabin that was owned by this cannabis farm owner. And there was a phone call.”

The conversation was a little tense. About 15 minutes later, a truck’s headlights shone into the cabin. Two men entered; they were wet and covered in mud. One of them was talking very fast. As Holthouse says in the documentary, "his eyes are like the eyes of a panicked horse, you know, they're rolling around. I was sketched out enough by this guy's presence that I was just kind of trying to become one with the couch."

One area that's especially steeped in the Sasquatch myth is Northern California's Emerald Triangle — the three counties of Humboldt, Trinity and Mendocino. It also happens to be the region where most of the United States’ cannabis is grown. What is it about this area that keeps the legend of Sasquatch alive?

"I think it's the woods out there,” Rofé said. "When you're out in those woods, it feels prehistoric. And you get a few miles deep in those woods and you forget what life is like back in the city or the suburbs. And so I think if you're out in the woods and you want to find something, that's a place where you can really sort of lose yourself. Everything about that setting lends itself to the folklore."

Rofé explained that the criminal element is very pervasive in these deep, dense, dark forests.

"It's pretty lawless, there are not enough police officers, law enforcement agents to corral or control what's going on out there," he said. "It's the Wild West, it really is. And there’s nobody to keep the peace. It's the locals who lay down what the law is. And if somebody feels that you've crossed them in any way or done something that is not acceptable according to the way things work up there, you're going to get killed and nobody's even going to know where to look for you."

Rofé admitted that he, his crew and Holthouse were often concerned for their safety while they were filming in the Emerald Triangle. The only exception was when they were filming with people from the Sasquatch community or people who had previously lived in that area in an effort to leave the grid and get back to the land.

"Filming with all those folks was totally safe," Rofé said. "And they were all really wonderful, warm, welcoming people. But when we were exploring this sort of backwoods underworld, we were constantly aware of the fact that we were not safe and that we were already overstaying our welcome just by way of setting foot there."

By exploring that danger alongside the omnipresent specter of a legendary monster deep in the woods, Rofé and Holthouse have created a blend of true crime and ghost story.

"If you dig at a ghost story for long enough, you might actually get to something that is even scarier and wilder than you anticipated," Rofé said. "And I know that's what our experience was making this. And so I hope that people can have of half of that experience watching it."