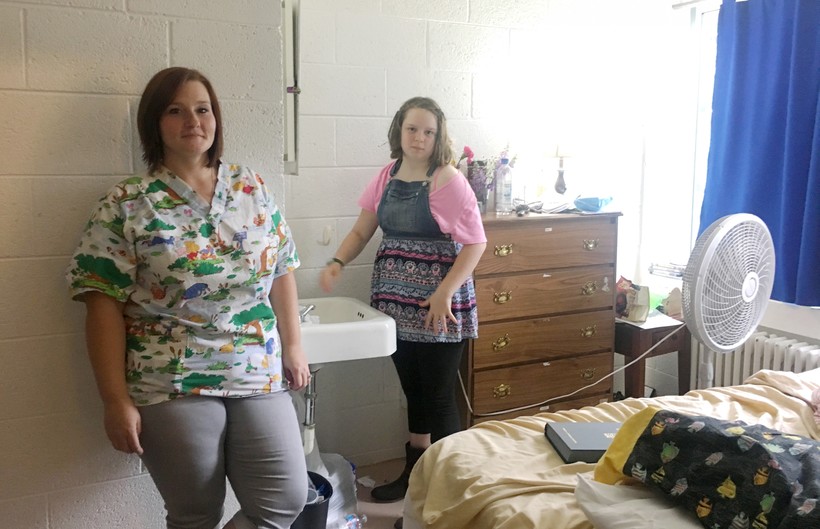 Heidi Tibbits with her 10-year-old daughter Mattie Whitehead in one of the family's two rooms at Benjamin House.

There aren't a lot of places to enjoy privacy at Heidi Tibbits' home of just more than a month. The place Tibbits calls home right now is Benjamin House, a homeless shelter in Barron County. It’s a small but spread out northwestern Wisconsin county with about 45,000 residents.

Tibbits, with her bright red hair, is wearing scrubs after just getting off work at a senior care facility earlier this month.

She walks through a shared kitchen with a group of children standing around the counter, a communal living room with four people watching a game show on the TV, and then she gets to the two rooms her and her three kids have been living out of since the beginning of June.

There’s a twin-sized bed on one wall, a bunk bed two feet away, and clothes and stuffed animals everywhere in the room her kids share.

Tibbits looks under her bed and pulls out a stack of papers — all of them are apartment listings.

"I probably called 50 places in this last week and every realty that is around here," Tibbits said. "From here to Barron, to Cameron, to Chetek — and nothing."

Tibbits is looking for a place that fits her family and her price range, which means nothing more than $650 a month.

"It’s actually been really hard. (We’ve) pretty much been homeless now two-and-a-half years," she said. "Me and my fiancé and our kids have tried for the last year now, trying to find a place, and just keep getting denied.”

One of the reasons Tibbits is having trouble getting approved for a home is her court record. She has an OWI, and in 2012 her home was foreclosed on. But Tibbits doesn’t hide her record, and she is frustrated people can’t see past it.

"It’s like, are you perfect?" she said. "Because I don’t think one person on this planet is perfect, and I think everybody deserves a second chance." Tessa Whitehead, 11, colors in the room she shares with her brother and sister at Benjamin House. Rachael Vasquez/WPR

Tibbits is not the only one trying to find stable housing in Barron County. Lori Bowman, executive director of Benjamin House, said the shelter in Rice Lake has had a waitlist since at least 2015.

"Right now we’re actually over full, but we probably get 20 to 30 calls a month of people looking for housing," Bowman said.

Benjamin House enforces a 90-day limit to their residents’ stays just to meet the community’s need. Bowman said it places a huge stress on the people staying there, but it’s all they can do with their limited amount of space.

Housing in Barron County is more expensive than you would expect for a place of its size, said Will Gehl, executive director of the Wisconsin Rural Housing, a statewide nonprofit that gives direct housing assistance to the poor.

One of the reasons for Barron County’s high housing costs is that there is not a lot of housing available, which gives landlords more freedom to raise rents. But Gehl said the other factor is income. In 2015, 44 percent of Barron County households renting made less than $25,000 a year, according to the U.S. Census Bureau's five-year estimates.

"There's a gap in the middle wages that you would expect to see people earning to afford typical two- or three-bedroom apartments," Gehl said. "So there's just less people in that middle ground who can afford a place."

Gehl said that sets up a choice for landlords and developers: they can either target the renters with lower incomes or they can cater to people with higher incomes. A prayer written by 10-year-old Mattie Whitehead reads 'Dear Lord, I just hope we can get a place so I can be myself again, Amen."Rachael Vasquez/WPR

Nancy Keeler has been a landlord in Barron County for 17 years. Her units range from $525 dollars a month for a one-bedroom to $625 a month for a two-bedroom. Keeler said when she gets an opening, she’ll get anywhere from 40 to 50 calls a week.

"I have to deny a whole lot of people, because if I have 40 calls and one opening, I can only accept one," Keeler said.

For Heidi Tibbits, the weeks of calls and searching paid off after she found a three-bedroom house in Haugen.

Tibbits said she is happy to have her family in a place of their own, but she also acknowledged that she’s facing new stresses. Her new house is infested with fleas, the family’s car started acting up, which could be another big cost, and as with any rental, she’s once again responsible for bills and rent every month.