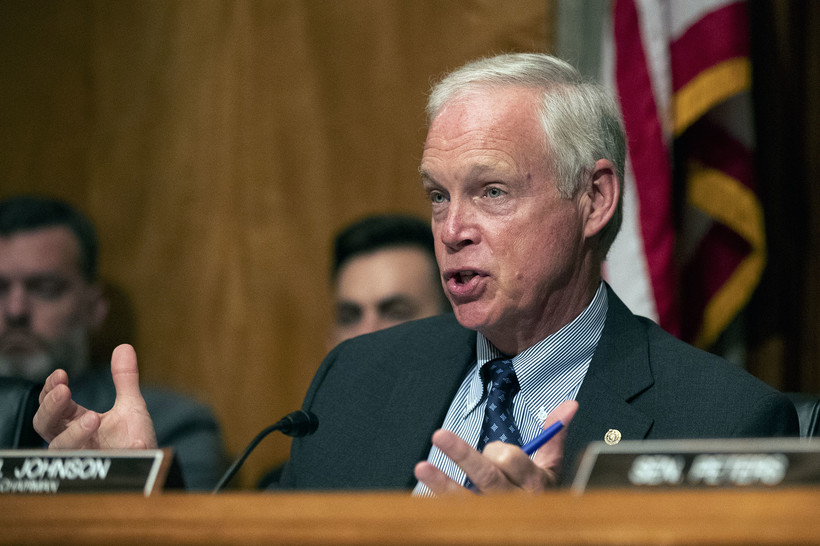 At The Same Time, Johnson Said It Would Be 'Crazy' To Keep Schools Closed This Fall
By Shawn Johnson
Share:

Republican U.S. Sen. Ron Johnson said Friday that the state might need to restrict crowds at bars if COVID-19 cases spike in Wisconsin, but that it would be "crazy" not to reopen Wisconsin's schools.

Johnson spoke at length about his views on the coronavirus in a video conference with the Milwaukee Press Club Friday.

His comments about bars were noteworthy given the drinking culture in Wisconsin, a state where people flocked to taverns almost immediately after the state Supreme Court struck down a statewide "Safer at Home" order.

"I do think that we need to continue to concentrate on those businesses that represent out-of-control spread," Johnson said. "And here I'm thinking tightly packed bars. As much as I know that hurts people to hear me say that here in Wisconsin, that might be something we need to control."

That changed on May 13, when the Supreme Court's ruling ended all statewide restrictions on bars and restaurants. While local restrictions remained in a handful of Wisconsin's largest counties, bars reopened elsewhere without any limits on their capacity.

Johnson did not voice concern at first. He was asked by CNN on May 17 what he thought about packed bars in Wisconsin.

"I certainly see a small subset of Wisconsinites celebrating a little freedom," Johnson said at the time.. "We've all been pent up, we've all been frustrated and so I think they took that occasion."

On a statewide level, it didn't seem to matter initially. The number of daily new cases declined for the first half of June, and the percentage of positive COVID-19 tests trended downward for most of May and June.

But over the past two weeks, cases trended upward in Wisconsin. The state reported 520 new cases and a 5.7 percent positive testing rate on Friday, with young people accounting for much of the increase.

Other states have been responding to far worse numbers. Texas' governor closed all bars and reduced seating capacity at restaurants on Friday, while Florida left bars open but banned them from serving alcohol.

Johnson, who said he wears a mask when he visits the grocery store, did not offer specifics on what he wanted to see from state leaders. But he repeatedly suggested that they should look at bars to control the spread of COVID-19.

"When you're in a bar, you're talking loud," Johnson said. "We know that coronavirus is aerosolized. That's not a very safe environment."

"We need to watch this and monitor this very carefully, and we really need to focus on those establishments … that represent a real risk for out-of-control spread," Johnson added.

While any future statewide shutdowns could require Evers to work with the Legislature on a compromise, the court's ruling in May preserved the governor's power to unilaterally shut down schools.

Johnson said Friday that's a step that Evers should not take, arguing that even though schoolchildren can spread COVID-19, they aren't likely to catch a severe case themselves.

"The only risk in opening up schools is potential spread," Johnson said. "I think it would be crazy not to completely open up our school systems."

Johnson took heat early in the COVID-19 pandemic when he warned against a general shutdown, saying at the time that "we don’t shut down our economy because tens of thousands of people die on the highways." At the time, Anthony Fauci, the head of the National Institute of Allergy and Infectious Diseases, called Johnson's comments "totally way out."

As of Friday, roughly 125,000 Americans had died from coronavirus, including 766 people in Wisconsin.

Johnson said the country needed to monitor COVID-19, but he remained opposed to a general shutdown.

"I would say absolutely not," Johnson said. "We never should have done that in the first place."