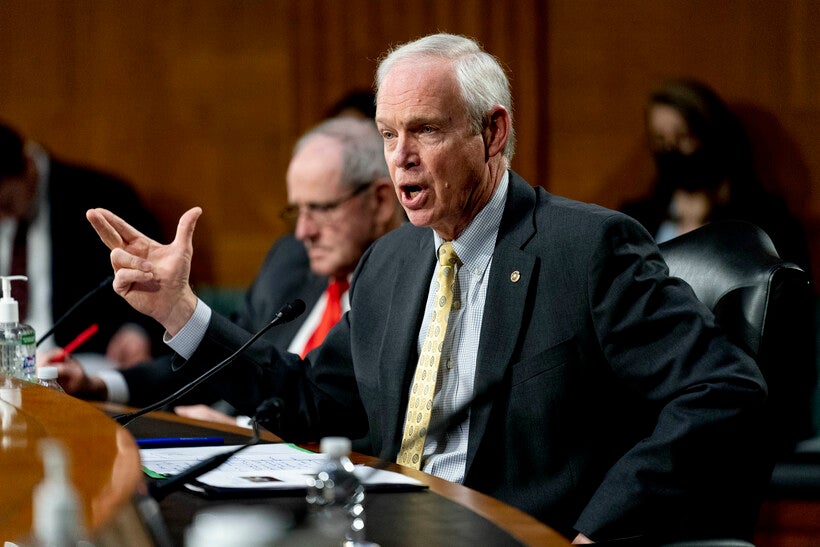 Republican U.S. Sen. Ron Johnson said in a radio interview Tuesday that funding for Medicare and Social Security should be approved by Congress each year rather than being automatically renewed. But with three government shutdowns in the last seven years, such a move could add uncertainty to programs millions of Americans rely on.

Johnson made his comments on the Green Bay-based "Regular Joe" radio show. He said federal funding is generally split into two categories: discretionary and mandatory.

Discretionary spending, which covers things like national defense and Veterans Affairs, must get annual approval from Congress, Johnson said.

"What's mandatory are things like Social Security and Medicare," Johnson said. "If you qualify for the entitlement, you just get it, no matter what the cost."

Johnson said 70 percent of all federal spending is mandatory and lacks proper oversight as a result.

"We've got to turn everything into discretionary spending, so it's all evaluated, so that we can fix problems or fix programs that are broken, that are going to be going bankrupt," Johnson said. "Because, again, as long as things are on automatic pilot, we just continue to pile up debt."

The statements reflect long-held positions for Johnson, who entered politics in 2010 campaigning against federal deficits and has long raised the alarm about what he calls unsustainable government spending. But critics charge that converting Social Security and Medicare into discretionary spending programs would endanger popular social spending programs relied on by millions.

In a statement posted to Twitter, Johnson's spokesperson Alexa Henning said the point was "that without fiscal discipline and oversight typically found with discretionary spending, Congress has allowed guaranteed benefits for programs like Social Security and Medicare to be threatened."

"This must be addressed by Congress taking its responsibilities seriously to ensure that seniors don't need to question whether the programs they depend on remain solvent," said Henning.

In September 2021, Social Security and Medicare trustee reports projected that the trust fund for Social Security would be unable to pay full benefits in 2034. That's one year earlier than a previous estimate. A 2016 report from Social Security Administration trustees said ongoing payments coming into the fund would be "sufficient to pay 79 percent of scheduled benefits."

Congress could boost revenues going to the Social Security and Medicare funds by way of tax increases or other changes to fiscal policy, to the retirement age or the Social Security funding formula. Gaining political consensus on any such plan would likely be an uphill battle, and previous attempts to change or restrict Social Security benefits have failed.

Johnson's call to make all federal spending discretionary also seems politically unlikely and could leave Americans who rely on Medicare and Social Security benefits in a lurch if Republicans and Democrats deadlocked on reauthorization.

Congress has a long history of government shutdowns in the midst of budget battles. There have been three since 2014 that resulted in federal employees going without pay for days or weeks.