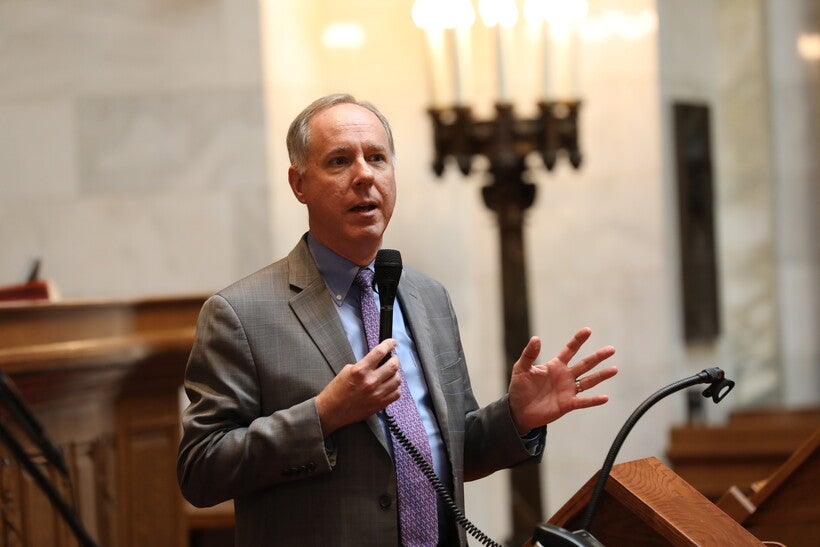 In a Wednesday ruling, Dane County Circuit Court Judge Valerie Bailey-Rihn ruled that Vos, R-Rochester, and the Assembly demonstrated "a collective and abject disregard" of a prior order to produce documents from Gableman and his team requested by American Oversight, a nonpartisan, nonprofit watchdog group.

During a Jan. 24 hearing, Vos' chief legal counsel Steve Fawcett, who was listed as the contact person for the speaker's office on Gableman's contract testified that he had not trained Gableman on how to respond to records requests, including what records to keep. Fawcett also testified he had never visited Gableman's office and didn't know where it was located.

"That testimony revealed a collective and abject disregard for the Court's order: Robin Vos had delegated the search for contractors' records to an employee who did nothing more than send one vague email to one contractor," Bailey-Rihn wrote in Wednesday's ruling.

Bailey-Rihn's latest order gives Vos and the assembly 14 days to submit "proof to a reasonable degree of certainty" that they have searched for records sought by American Oversight.

"Because of the uncontroverted evidence that the Respondents failed to instruct contractors to preserve records, each Respondent shall submit evidentiary proof of reasonable efforts to search for deleted, lost, missing, or otherwise unavailable records, or provide an explanation of why such a search would not be reasonable," wrote Bailey-Rihn.

Bailey-Rihn said that proof should take the form of sworn affidavits describing specific steps taken to find the records and satisfy the court order. If Vos and the Assembly are unable to do so within two weeks, Bailey-Rihn has ordered fines of $1,000 for each day after the deadline.

Melanie Sloan, a senior advisor with American Oversight, said that Vos' office and Assembly staff have provided very few documents, including contracts with members of Gableman's team. She said there's no email traffic between Vos and those conducting the election review.

"You would think that would have required some communication, some contracts, some discussions," said Sloan. "And yet, there's nothing."

Sloan noted that Judge Bailey-Rihn's actions on Wednesday were not a final order, meaning appealing the contempt ruling will be more difficult.

"That is not to say that they won't find some creative way to attempt to appeal it," Sloan said. "You know, lawyers can come up with lots of different ways to try and move cases along. But just because they would file it in appellate court doesn't mean an appellate court would necessarily listen or take the case."

Staff with Vos' office didn't reply to a WPR email requesting comment on the contempt of court ruling.

The Wisconsin State Journal reported that Vos was asked about the ruling Wednesday afternoon at a pair of town hall meetings in Racine County.

"It’s a liberal judge in Dane County trying to make us look bad," Vos said. "I don’t know about you, but when you have deleted emails, how do you get deleted emails back if they’re from Gmail? We already have an expert saying they can’t be done. You have a judge who’s focused on making a name for herself, and that’s all she’s doing,"

Vos said the Legislature has followed the law and there is "no problem with what we're doing." He said the lawsuits over the records are an attempt to stop the investigation.

"This all focuses on them not wanting to get to the truth of what happened in 2020," said Vos.

Wisconsin Transparency Project founder Tom Kamenick, who previously worked as an attorney with the conservative Wisconsin Institute for Law and Liberty, told WPR it's good to see judges who are willing to hold record custodians' feet to the fire.

"I think too often you get custodians who just don't care very much about responding promptly and thoroughly and very often there aren't really any real consequences to them," said Kamenick. "So, I'm glad to see this action from Judge Bailey-Rehn."

Wisconsin Freedom of Information Council President Bill Lueders, who is also editor of The Progressive, said he's unaware of any other instance where a public elected official in Wisconsin was found in contempt of court for refusing to turn over records.

"There are many cases where courts ordered the release of records over the initial objections of a public official," Lueders said. "But it's extraordinary for the judge to have in this case concluded that Robin Vos should be held in contempt of court for his refusal to provide records."

In June 2021, Vos announced that former justice Gableman would lead an investigation into the 2020 election. That came a day after former President Donald Trump threatened to support primary opponents against Vos and other Wisconsin legislative leaders unless they "step up and support the people who elected them."

A contract between Gableman and Vos set aside up to $676,000 of taxpayer funding for the investigation.

After Trump lost to President Joe Biden in November 2020 by 20,682 votes he and allies lost repeated efforts to overturn the election in state and federal court.

On March 1, Gableman gave a presentation on his investigation findings in which he told lawmakers to "take a very hard look" at decertifying the 2020 election, which is legally impossible. He also said private grants used to run the election in some cities was akin to "election bribery" and called on lawmakers to "eliminate and dismantle" the Wisconsin Elections Commission, which was created by Republicans.