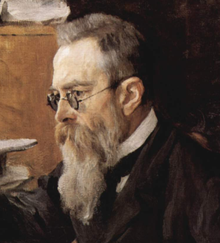 In his memoirs Nikolai Rimsky-Korsakov gives us a close and colorful look at his fellow composer, Alexander Borodin:

I always thought it strange that certain ladies...who apparently were admirers of Borodin’s talent as a composer, relentlessly hauled him to all kinds of charitable committees, harnessed him to the office of treasurer and so on, and in so doing, robbed him of the time which he could have used for creating wonderful, artistic musical works. Thanks to the charitable folderol, his time was frittered away on minutiae that could have been taken care of by those who were not a Borodin.

On top of that, knowing perfectly well how kind and easy-going he was, medical students and all kinds of youthful types of the fair sex hounded him with myriad solicitations and requests, all of which he tried to fulfill with characteristic self-denial. His corridor-like apartment never enabled him to lock himself in or pretend that he wasn’t home. Anybody entered his home at any time whatsoever and pulled him away from his dinner or his tea. Dear old Borodin would get up with his meal or his drink half-tasted, would listen to all kinds of requests and complaints and would promise to “look into it.”

People would cling to him with unintelligible explanations of their business, chattering away by the hour while Borodin constantly wore a hurried look, having one thing or another to do. It broke my heart to see his life completely filled with self-denial stemming from his own inertia….

In the four rooms of his apartment there often slept several strange persons; sofas and floors were turned into beds. Often it was impossible for him to play the piano because someone lay asleep in the next room.

Given Rimsky-Korsakov’s description, it’s surprising that Alexander Borodin had time to become one of Russia’s great composers.