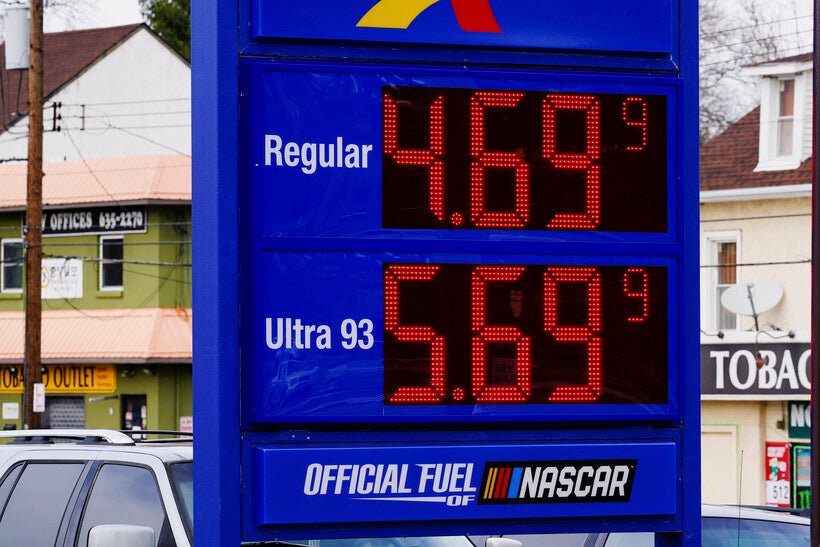 With higher costs and smaller tips, some drivers question whether the job is worth it
By Diane Bezucha
Share:

Dani Bartle knows the DJ at Lucky’s 1313 Brew Pub in Madison draws the biggest crowd on Thursdays. She’s memorized the college football schedule and the events calendar at Ho-Chunk Casino.

For the past two years, Bartle has worked full-time as a gig driver juggling six different apps — Uber, Lyft, UberEats, DoorDash, Instacart and Roadie. She's based in Wisconsin Dells but works in both the Madison and Wisconsin Dells markets.  And she has a hard and fast rule.

"I don't do anything that I don't make at least one dollar a mile," Bartle said.

But, rising gas prices are really complicating the equation.

In Wisconsin, gas is averaging $4.05 a gallon — a 50-percent increase from a year ago and a 14-percent increase since last month alone. The steadily rising prices are forcing gig drivers like Bartle to reconsider whether the job is worth the cost.

"Like, is Madison smart on a Monday when all of the UW students are being pretty chill because their week started? No. Now with the cost of gas, it's not worth it. One year ago, at $2.60 a gallon, heck yeah I’d have driven down there," Bartle said.

When she started driving full-time a little more than two years ago, Bartle’s car was paid off and gas was cheap. At the time, she drove 40 to 45 hours a week and took home about $1,000 a week after expenses. Since then, she and her husband have had to replace both their cars. Now, they have two car payments, and gas has nearly doubled.

On a typical Saturday — her busiest day — Bartle said she goes through $40 of gas in her Nissan Rogue or $45 in her husband’s Dodge Caravan. And she has to drive 60 hours a week just to make what she used to.

"If we stick with the trend that's there, the first thing I'd probably have to do is go get what I told my husband is a 'normal people job' and at least do something else part-time. I think if I lived in a different town, maybe I'd already be doing that," Bartle said. 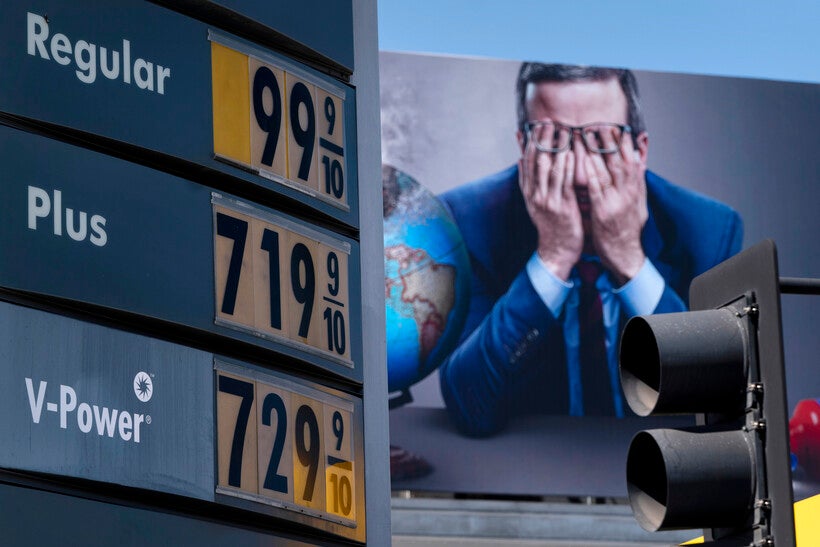 Gas prices are seen in front of a billboard advertising HBO's Last Week Tonight in Los Angeles, March 7, 2022. Three oil regimes that President Joe Biden and past U.S. leaders have snubbed — Venezuela, Saudi Arabia and Iran — are the targets of U.S. outreach as global fuel prices hit record highs during the Ukraine crisis. But it’s not clear any U.S. diplomacy could get more crude on the market fast enough to help the current supply crunch. Jae C. Hong/AP Photo

Pleasant Prairie resident Elizabeth Medina has been a full-time gig driver in the Kenosha-Racine area for three years. She generally makes at least $100 a day, but it now costs her more than $50 to fill the tank in her 2011 Honda CR-V.

"I had to temporarily suspend doing DoorDash, GrubHub and UberEats deliveries due to rising gas prices," Medina said. Now, she focuses exclusively on Instacart, which pays a little better than the food delivery apps.

But the math is especially bad for part-time drivers who work to supplement their income.

"They just do it just to make an extra two- or three-hundred dollars. But if their gas expense is $50 or $75 a week, I guarantee you a lot of them are not going to be driving," said Maurice, an Uber driver in Milwaukee who asked to use his first name only.

Maurice is a seasoned driver who has worked for five years in four different cities. He spends $200 a week in gas for his Subaru Ascent and pulls in about $2,000 to $3,000 a week. But he said he has the Uber app on 120 to 140 hours a week. And as an experienced driver, he knows how to work the system — he won’t take rides for fewer than $2 per mile.

When an offer pops up, the app shows drivers estimates of what they'll earn. Drivers can choose to accept or decline rides.

Maurice has a larger vehicle that allows him to access the higher rates for UberXL. He lives near the airport, hangs out in downtown Milwaukee at bar close, and sometimes offers customers discounted off-app rates that allow him to pocket what Uber would normally take.

And if gas prices continue to go up, Maurice predicts that newer and less experienced drivers will be the first to go.

"Drivers are going to be dropping like flies, which then means the consumer gets screwed a little bit," he said. 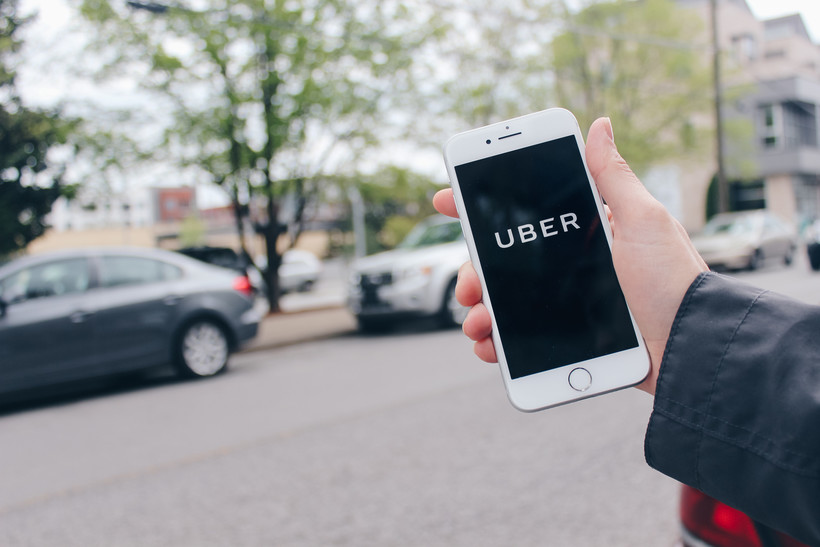 Fewer drivers and the high price of gas is further compounding a problem that already exists among rideshare businesses — the pay structure.

Most of these rideshare apps pay a per-mile or per-minute rate based on location. The food delivery apps pay a per delivery fee that is generally pretty low — anywhere from $2.50 to $4, Bartle said.

But the companies have not increased base rates as gas prices have risen.

"You can't keep paying us the same and have our cost dramatically going up," Bartle said.

Many drivers have signed a petition to raise Uber and Lyft base pay, but Bartle said the response from these companies has not been satisfactory. In most cases, Bartle said the companies are saying they will keep an eye on fuel trends in the coming weeks.

"What do you mean, 'You're gonna watch it?' You should have been watching it for six months," she said.

And in fact, Bartle added that some company policies make things worse for drivers.

For example, drivers can only decline a limited number of rides before their ratings drop. But with higher gas prices, fewer rides are worth taking. Recently, Bartle was offered a McDonald’s DoorDash delivery that involved 13 miles of driving for $4.75, including tip. She passed.

And Maurice’s phone beeped at 5 a.m. with a rider 20 miles away who needed to travel two miles.

In another example, Bartle said Uber increased the time drivers have to wait for a customer by two minutes. But they did not increase the flat fees that are paid to drivers for these delays.

“If you have three or four rides like that in a row, you just lost your whole hour," Bartle said. "You lost your rides, lost your potential for a tip."

Tips are a bit of a sore spot for some drivers. When she gets tips at all, Medina from Pleasant Prairie said they’re usually 10 percent of the order or less.

"People don't realize we work for tips. I understand people are hurting right now (due to) the rising grocery and gas costs, but to not tip us at all is a slap in the face," Medina said.

She considers services like UberEats and DoorDash luxury services — someone is bringing things to you so you don’t have to get off the couch or venture out in bad weather.

"If they can't tip us at least 15 percent of their total order, they have no business using these apps to get their food and groceries," Medina said.

And Bartle agrees: "People have forgotten their manners."

"That one extra dollar on that tip compared to what you used to give can go a long way if we're doing this all day and every customer did that. That might take care of my fuel increase," she said.

And it might help ensure that your Pad Thai noodles and cough medicine keep showing up.

"A lot of drivers right now are saying no tip, no trip," Medina said. 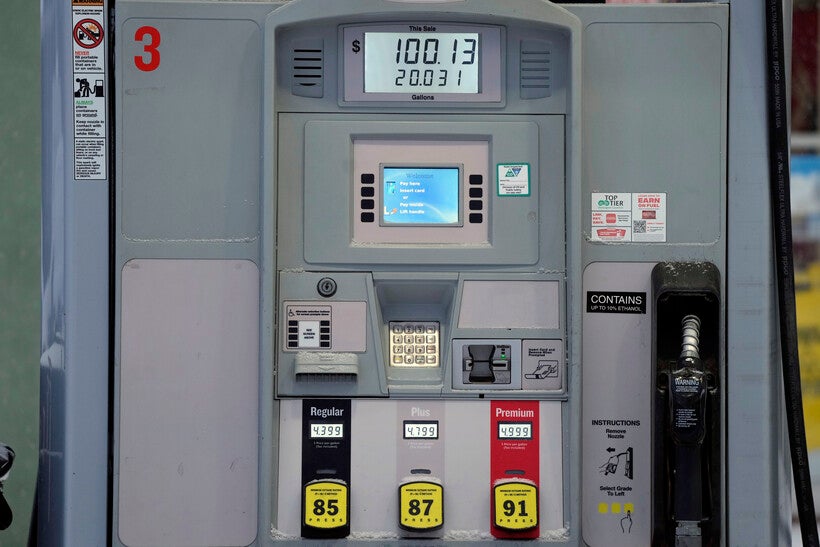 Prices for various grades of gas are posted on the digital readouts of a pump after a customer paid just over $100 for gas at a service station Wednesday, March 9, 2022, in Denver. David Zalubowski/AP Photo

But the stress on delivery drivers doesn't start and end with them. It has a domino effect on the restaurant industry, which is already struggling with labor shortages.

"Our biggest thing right now is just getting delivery drivers," said Zach Chapman, marketing director for Ian’s Pizza in Madison. "The gas will just be another hurdle."

The company recently implemented a guaranteed $15-per-hour wage for all employees. With tips, Chapman said their delivery drivers are averaging $20 to $25 per hour. Drivers are given a per-trip stipend to help with gas costs and Chapman said Ian's Pizza is offering a $1,000 hiring bonus in some locations.

Chapman said the chain, which has locations in Madison, Milwaukee, Seattle and Denver, has been struggling for months to find drivers. Their Madison State Street location alone is in need of five drivers.

Without enough staff, they've had to reduce hours and eliminate most late-night delivery.