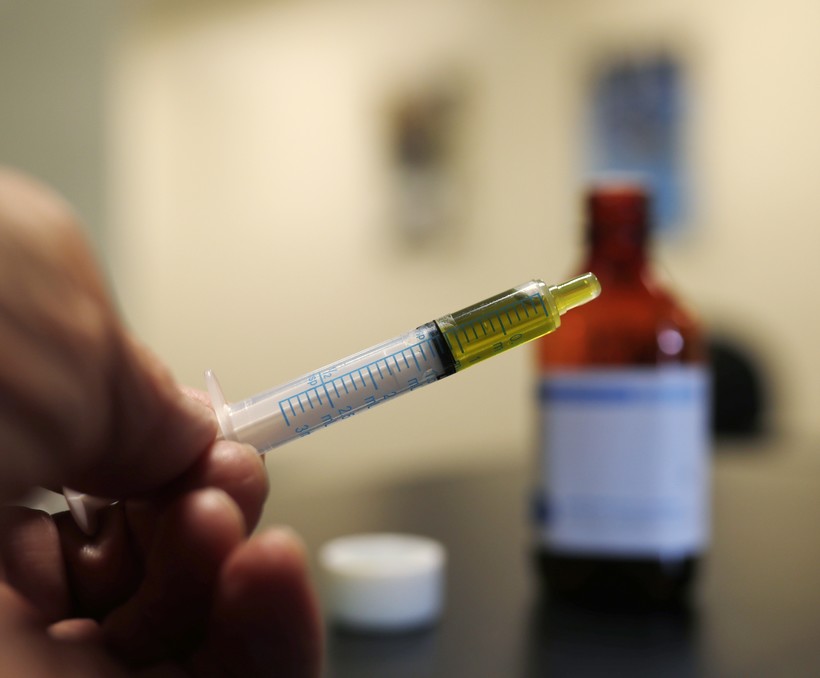 A syringe loaded with a dose of CBD oil is shown in a research laboratory at Colorado State University in Fort Collins, Colorado. AP Photo/David Zalubowski

Cannabidiol or CBD products have sparked a wave of new businesses and new products for existing retailers across Wisconsin.

But some business owners and legal experts in the state say there's still too much confusion about the laws surrounding the sale of CBD.

Jeff Glazer, an attorney and clinical associate professor at the University of Wisconsin-Madison's Law and Entrepreneurship Clinic, said state law creates a straightforward process for how to legally grow hemp, but it doesn't provide enough clarity on manufacturing and retail of hemp products.

"There's lots of gray area in what form the end product is allowed to take, in terms of whether it can be in sort of a pure oil form or whether it can be introduced as food or a 'dietary supplement,'" Glazer said. "It directly affects the retail environment. And then a lot of the drug claims are bringing the attention of the (U.S.) Food and Drug Administration."

CBD is legal under federal law thanks to the 2018 farm bill. The FDA is currently gathering public comment as it decides how to regulate CBD products.

Tim Murphy started his CBD business, Kickapoo Kind in Viroqua, before the farm bill was passed in December 2018. He said he had to be careful when selling products from out-of-state because of the lack of regulation.

"I really had to vet a lot of the products and I found a lot of products that didn't pass their testing, they didn't have 10 mg of CBD like they were supposed to," Murphy said. "It's still going to be an issue as we go forward. It's not going away any time fast because everybody’s just looking to slap their name on a label right now and profit from the huge boom of CBD."

State Sen. Patrick Testin, R-Stevens Point, sponsored the 2017 bill for Wisconsin's hemp pilot program and recently introduced legislation to tighten the state's labeling laws for CBD products. He said the new bill would help address false claims on CBD packaging and products that contain more than the allowable level of THC, the psychoactive component of marijuana.

"We do want to provide certainty in the marketplace, not just for law enforcement but also for consumers so when they go into a shop, they know that this product is what it claims to be," Testin said.

He said one of the biggest challenges for the industrial hemp industry has been the confusion caused by different interpretations of the law by federal and state agencies. Testin said the new bill, which is currently in committee, would clarify state regulations, especially for law enforcement.

"Hemp is coming through the Badger State one way or another,” Testin said. "That makes law enforcement's job a little bit more difficult because if they encounter whether it's hemp flower or CBD products in a traffic stop or any other setting, they're going to have to do a little bit more homework and research to make sure that that's a legal product. But that's why we want to make sure that the Wisconsin hemp industry is kind of the gold standard.”

In the meantime, Glazer said it's on retailers to know what products are and how they fit under current interpretations of the law.

"For example, FDA guidance that says you're not allowed to have CBD in food products, but you have a Wisconsin interpretation that says well as long as the product is made entirely in the state, then maybe you can put it in food," Glazer said. "So really understanding where the product is coming from and where it's going to is super important from an entrepreneurship perspective."

He said retailers can protect themselves by having a Fit for Commerce certificate for Wisconsin hemp products issued by the state Department of Agriculture, Trade and Consumer Protection.

But sourcing Wisconsin products has been difficult because of limited processing capacity in the state. It's how Murphy ended up in the retail industry for CBD, after originally planning to just grow industrial hemp in 2018.

"Halfway through the season, I'm like, 'There's no place to go with it.' I didn't want to send it out of state because of the still gray areas," Murphy said. "I figured it was an open market for us to try to get into and we took the risk."

Murphy said he's had a positive experience opening the business and the community in Viroqua has been supportive.

But Glazer said not all hemp entrepreneurs have had the same luck. He said he’s heard from many retailers that they're having a hard time finding a bank or a credit card payment processor that will accept their business because of continued confusion around CBD laws.