Judy, a listener from Franklin
WPR
State Of Change 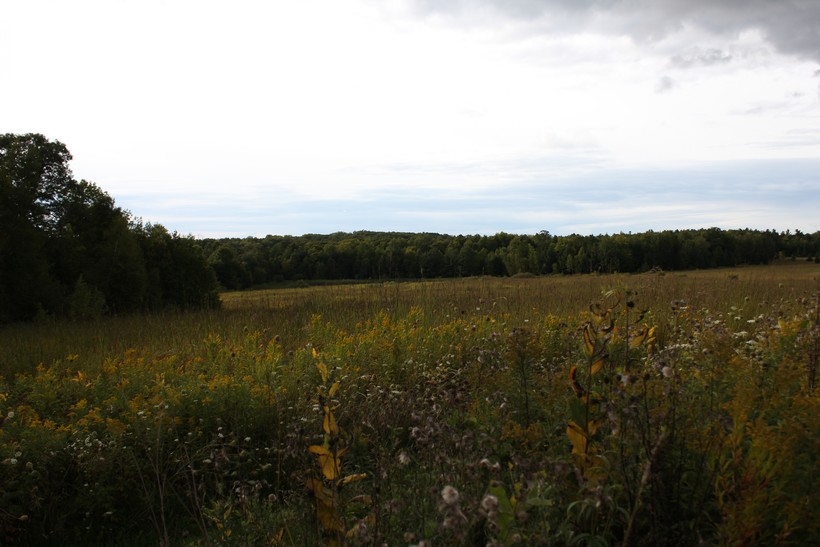 This rolling prairie near Ladysmith was once the site of the Flambeau Mine. Rich Kremer/WPR

Ladysmith City Administrator Al Christianson said 90 percent of the Flambeau mine site was reclaimed over a period of months.

"When the pit was refilled, the types of material that came out went back in the reverse order so what was at the bottom went back to the bottom and so on up to the top," he said. "The top was capped with clay."

The pit was backfilled with waste rock mixed with lime to neutralize any acid from sulfide minerals, which have been known to pollute water if exposed. The Flambeau Mine operated for four years, producing 181,000 tons of copper along with 3.3 million ounces of silver and 334,000 ounces of gold. Reclamation of the site began in 1997, wrapping up late the next year. Acres of wetlands and thousands of trees and plants were planted to replace what was lost, according to the Wisconsin Department of Natural Resources.

The mine is the only copper-gold mine to operate in Wisconsin under modern-day mining laws. However, Gov. Scott Walker recently signed a bill lifting the state's mining moratorium. The law, signed by former Gov. Tommy Thompson in 1998, required companies seeking to mine sulfide ores such as copper, zinc, or gold to provide examples of similar mines that operated and were closed for 10 years without causing pollution before they are authorized to mine in the state.

Supporters of mining said the requirement effectively served as a de facto ban on sulfide mines. Now, opponents fear and supporters hope Wisconsin may see an increase in mining across the state.

While those opposed to mining believe it's impossible to return a site to what it once was after a mine shuts down, mining company consultant Steve Donohue with Foth Infrastructure and Environment said there’s been extensive work to reclaim the Flambeau Mine site and monitor water quality. 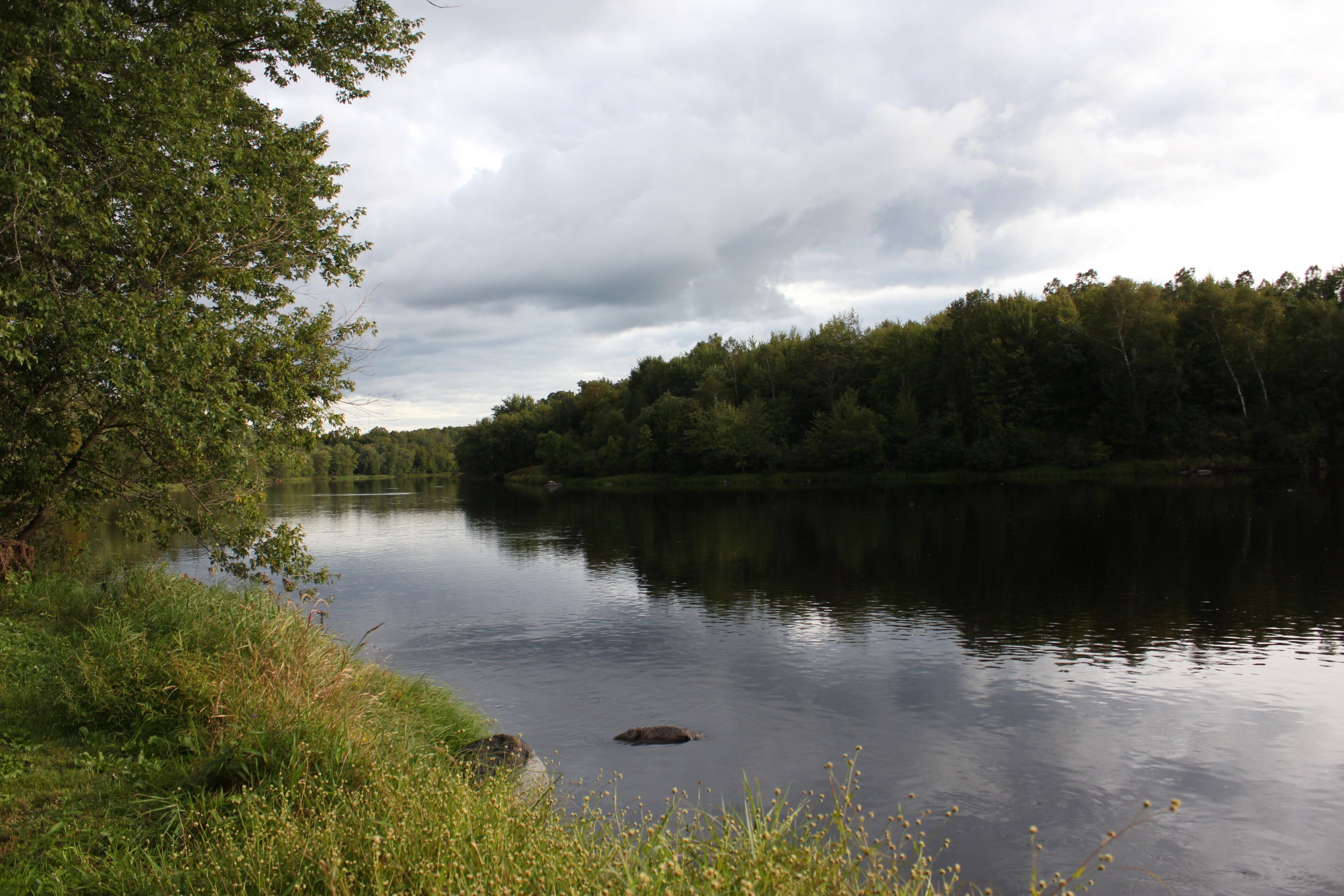 This body of water was once the site of the Flambeau Mine. Rich Kremer/WPR

A stream on the property, known as Stream C, that flows into the Flambeau River has shown high levels of copper and zinc. Environmental groups filed a lawsuit in 2011 against the mining company regarding the surface water contamination. A federal judge said the mine violated the federal Clean Water Act, but an appeals court deemed Flambeau Mining was in compliance in 2013.

Elevated levels of sulfate, copper and other metals have also been found in groundwater monitoring wells on site. However, hydrogeologist Zoe McManama with the state DNR said there's no evidence that those levels are impacting the Flambeau River's water quality.

"Groundwater monitoring parameters that we look for are the ones that are going to be indicative of acid production or mineral migration or any other kinds of things that might cause environmental concern," she said.

Monitoring at the mine site will continue for many years, and, as long as it does, Flambeau Mining pays for it.

The move to lift the state's sulfide mining moratorium also eliminated the Irrevocable Trust, which required mining companies to set aside money in perpetuity for long-term care of mining sites.

Even without the trust, McManama said companies will still be liable for any issues, adding that the financial assurance required of companies will be adequate to reclaim sites.

"We still have what we call a reclamation bond, which is something that’s required prior to the commencement of the mining activity," she said. "The amount of that bond is based on the estimated cost to the state of reclaiming the site and that work being done by a third party."

She said companies will also have to provide funds for long-term care for at least 40 years after a mine is closed, which puts Wisconsin somewhere in the middle of how neighboring states regulate mine reclamation. In Michigan, companies need to provide financial assurance for 20 years after a mine has been reclaimed, said Joe Maki with the Michigan Department of Environmental Quality.

"If we feel the reclamation activities still require monitoring, we can keep extending that for an additional 20 years," he said.

"The only time we release the financial assurance in its entirety is when we have decided that the entire site is fully reclaimed and ready to be released, meaning there’s no liability and nothing needs to be done on site that we would hold the company to do," she said.

Without setting funds aside for reclamation, it can be costly for states to clean up what’s left behind if companies don't pay.

Across the Midwest, there are 11 abandoned mine lands that have become Superfund sites, said a spokesman with the U.S. Environmental Protection Agency. Taxpayers have spent more than $371 million to clean up those sites alone. 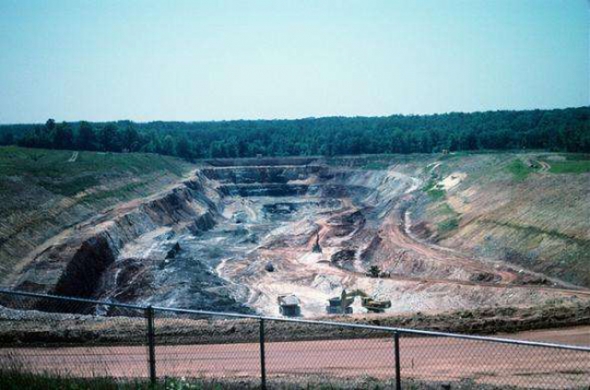 The Flambeau Mine near Ladysmith, shown in a photo taken in 1997. Wisconsin Department of Natural Resources (CC-BY-ND)

Since closing its operation, Flambeau Mining has worked to reclaim the 181-acre mine site.

"We are very proud of our reclaimed Ladysmith mine site that today is a local attraction for hiking, walking, access to fishing, horseback riding, and more," said Dave Cline, general manager of health, safety and environment at Rio Tinto and president of Flambeau Mining.

Cline said that while the company has yet to complete the Certificate of Completion process necessary to deem the reclamation process finished, the entire site has been restored.

“We have not yet proceeded with completing the Certificate of Completion process for the outlot area, which now serves as an industrial park for the community, as it is a very time consuming and costly process for the petitioner,” Cline said. “At some point, we may proceed but we have not yet made that decision.”