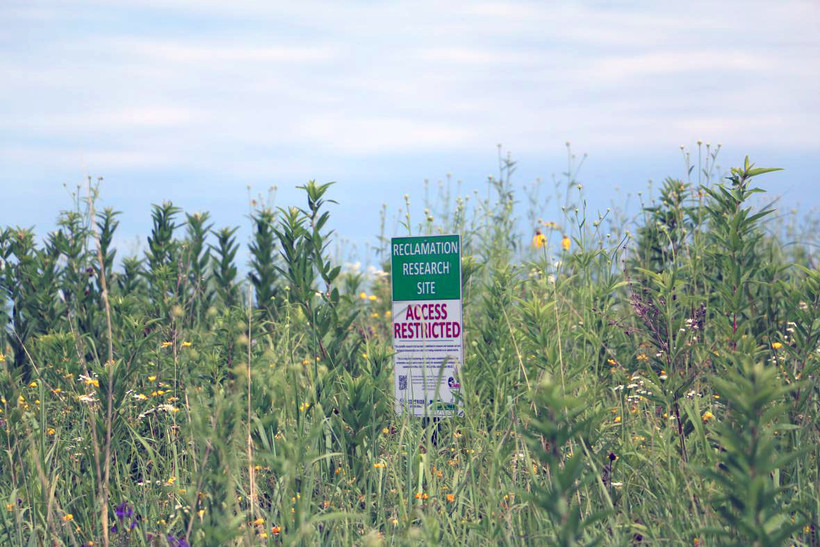 A sign marks the boundary of the test plot at the Superior Silica Sands mine in the Chippewa County Town of Auburn.

A five-year study in Chippewa County has transformed a reclaimed frac sand mine into a successful wild prairie. Researchers are hopeful that lessons learned can be used at other mining operations around the state beginning to fill in their pits.

In a rare collaboration, researchers from the University of Wisconsin-River Falls worked with industrial sand mining firm Superior Silica Sands and Chippewa County’s Department of Land Conservation and Forest Management to learn how sand mining impacts soil that is stripped away, stored and replaced after mining operations wrap up.

Since 2013, students led by UW-River Falls geology and soil science professor Holly Dolliver have been taking hundreds of samples from land owned by Superior Silica Sands in the Town of Auburn.

They started by measuring undisturbed soil at the top of ridges which contain the silica sand prized by oil companies drilling in places like Texas and North Dakota. Dolliver said they found that topsoil on these ridges was very thin — only a foot deep in some places — but still rich in diversity of microbial life.

Dolliver’s team then went to work sampling soils on land that had been reclaimed by Superior Silica Sands. Under Wisconsin’s mine reclamation statutes, companies must fill areas in once active mining has been completed.

There are rules for how steep the contours must be, along with performance standards for vegetation. But Dolliver said the law doesn’t really set standards for the health of the soil itself being placed on top of retired mines.

"Often soils are overlooked in the reclamation process," Dolliver said. "Sadly, they get pushed off to the side and there’s an assumption made that we’ll just lay them back down, the plants will grow and we’ll be good. And that mindset is even more apparent today because we have all sorts of things like fertilizers and amendments to help us out when natural soil quality can’t do it."

Dolliver said her students found the soil at the reclamation site had been compacted in a similar way to what happens on farm fields when heavy machinery is used, which makes it harder for water to filter through.

Dolliver also worried that the naturally sandy soil would be less than ideal for retaining water and fostering lush plant growth. A decision was made to try adding muds and fine silt separated from silica sand during processing as a way to increase the water retention of the soils in the test area.

That didn’t seem to make any difference in plant growth, Dolliver said, but it did have the effect of adsorbing naturally occurring metals leaching from topsoil and subsurface bulk material used in reclamation.

"So we’re actually finding that the metal concentrations in water are actually lower where we use the belt press fines than where we didn’t," she said.

In June 2015, a mix of wild prairie flowers and grasses were planted at the reclamation test plot. The seed mix came from Neil Diboll, president of the private company Prairie Nursery in Westfield.

Diboll said there were winners and losers during the three years that followed. Some species of prairie flowers did well in the first year but didn’t return while a number of prairie grass species thrived.

"Although sand mining is an inherently destructive process, we were able to reclaim within three years a reasonably diverse and fully vegetated native prairie on these pretty low nutrient, difficult soils," said Diboll.

He said he and the researchers put in a lot of work on the test plot but in the end the plants did much of the heavy lifting.

"We were able to take a poor soil and create a relatively rich habitat that supports pollinators, birds, butterflies, small mammals, deer, etc.," Diboll said. "So, what could be a bad situation can be turned to a positive by using native plants to solve problems."

In Chippewa County alone, he said, there are 85 active sand and gravel operations in different phases of the reclamation process. Seven of those are large-scale frac sand mines, three of which are beginning to restore land that has been mined out.

Masterpole said the test plot at Superior Silica Sands can act as a roadmap for others.

"I think we’ve got a very successful reclamation plot here," said Masterpole. "I think the demonstration effort has served its purpose and in the long run what we need to collectively do is commit the resources required to assure high quality reclamation that is both sustainable and adds value — either as economic value, as working lands or ecological value, if it’s not put into an economic productive use."

The hope now among the researchers from UW-River Falls is that they’ll be able to continue studying the soils at the Chippewa County test plot for up to 20 years into the future. But because the land is private and will be returned to the landowners once Superior Silica Sand is finished mining, lead researcher Dolliver said the decision of whether they’ll be able to continue collecting data won’t be hers to make.