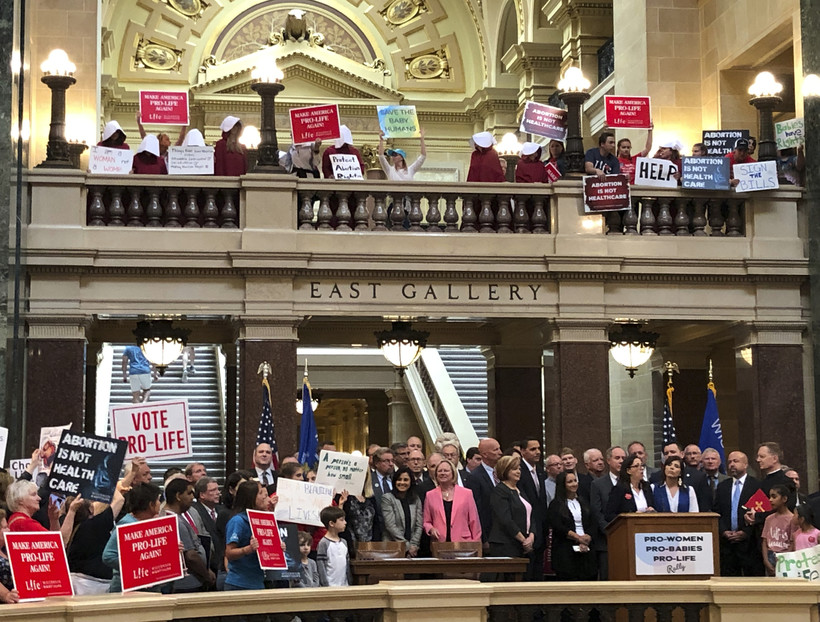 The measures include one known as the "born alive bill" that would require doctors to provide care to a fetus in the extremely rare cases where it survives an abortion attempt.

The state Assembly passed the plans in May and the Senate passed them earlier this month, but GOP leaders took the rare step of formally sending the bills to the governor's desk in a public ceremony.

Assembly Speaker Robin Vos, R-Rochester, told those gathered at the Capitol Thursday to send a message to the governor.

The other bills include one that would require doctors to tell women that they can change their mind when undergoing a chemical abortion.

They also include a measure to pull all government funding from Planned Parenthood, a move that would require a federal waiver.

And a fourth bill would ban doctors from performing abortions based on race, sex or congenital defect.

"I am often asked, 'Why are you working on legislation when you know it's never going to get signed in to law?'" said Wisconsin Right to Life Executive Director Heather Weininger to those attending Thursday's rally. "Do we ever stop fighting for life? No. And that's why you're here today."

As Weininger and others spoke, abortion rights advocates dressed as characters from Hulu's "The Handmaid's Tale," held signs in opposition and watched from a balcony above.

Democrats, like Rep. Chris Taylor, D-Madison, argue the GOP bills are a political ploy by Republicans.

"When they want to distract from this very good budget of the governor's — the peoples' budget the people support — they roll out their divisive agenda," Taylor said.

Evers said in April that he would veto the bills. His spokesman told the Associated Press Thursday that the governor still opposed them.