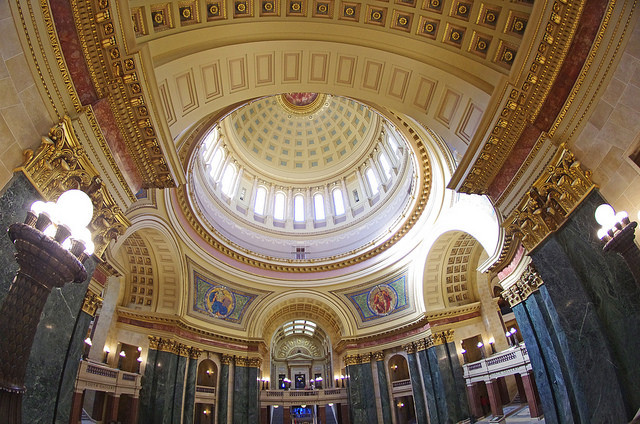 Assembly, Senate Look To Take Up Budget Next Week
By Elizabeth Dohms
Share:

Both are members of the state's Joint Finance Committee and respond to education, transportation and health care funding question from WPR's "Central Time" host Rob Ferrett.

Rohrkaste said increases in K-12 education funding and a proposal to build more roads are in line with what residents of the state have asked for. In a separate interview, Erpenbach countered that those measures could be funded better if the state accepted federal reimbursement for Medicaid.

The state budget heads to the Assembly next week, and then to the Senate, before making its way to Evers' desk.

These interviews have been edited for brevity and clarity.

General Takes On The Budget

Rohrkaste: I think that what we have in front of the Legislature is very good for the state of Wisconsin. We're making significant increases to K-12 education that's going to help put a lot more money into the classroom, better prepare our students for positions in the workforce. We're also putting a significant amount of money into health care, almost $600 million between hospitals, nursing homes, personal care workers.

And we're putting a lot more money into roads. We heard that people want more roads. We're putting about $484 million into roads and that includes continuing some of the new projects and the significant increases in local road aids as well. So I think we're going to be doing a lot for the state of Wisconsin and we can do it because the state's in such strong economic health.

Erpenbach: There are a lot of missed opportunities to work with Gov. Evers on K-12 funding, on special education funding, UW System funding and certainly transportation. The Republicans never took the governor up on his offers to sit down and talk about their differences. In the end, the results are pretty disappointing.

The budget that the governor introduced was balanced. They might not like the way it was balanced, but it was. On transportation, the idea of increasing basic registration fees and so on rather than increasing the gas tax let's out-of-state travelers off the hook.

Rohrkaste: Well, there are pros and cons to taking the federal money. Obviously it does put more federal dollars into our system. However, when you look at the way that BadgerCare or the Medicaid system is structured, it basically reimburses the providers at below cost. And it just puts greater cost burden onto private plans and other people in the state.

And it's also not guaranteed that the federal levels will continue. Currently through how we do BadgerCare there's people with up to 100 percent of the poverty level (that) can get onto BadgerCare. The people that are in between there, and that's what Gov. Evers is talking about, can get coverage through the exchange.

I think that the way we've done it is more fiscally responsible because we're still putting money into where it needs to be.

Erpenbach: I think it's probably one of the more irresponsible financial decisions I think I've seen Republicans make since I've been in office. The way the governor had it proposed is you take the Medicaid expansion, which means you cover people up to 138 percent of the federal poverty level with BadgerCare. If you do that, we save $324 million right off the bat of state money. We'd also leverage about $1.4 billion in federal funding coming to the state to go into all sort of other types of programs.

At the very least, people would be walking into emergency rooms with BadgerCare, so you do have some coverage in that. But again the idea that they're not taking this because it might hurt that the providers — the providers have to provide, no matter what. I would tend to think the providers want to be reimbursed something as opposed to nothing in certain cases.

Rohrkaste: I would argue that those tax cuts have been very important in terms of getting those employers to create good paying jobs and careers here in Wisconsin. When you look at the tax revenues that are coming into the state with us being at record levels of employment, we're in good financial condition. There was no need to basically raise taxes on job creators that are creating really good positions. And I want to ensure that we don't hurt that in the state.

Erpenbach: Well that's in there basically to give some of the more wealthy people of Wisconsin a tax break. These are people who create jobs. So rather than roll some of that money back and spend it on low- to middle-income taxpayers here in the state of Wisconsin, Republicans get that multimillionaire tax break in there. And in the end, that's what it is. It's a tax break for people who make a lot of money.

Takes On Looking Ahead

Rohrkaste: The one thing I've learned on Joint Finance is you can't make everybody happy all of the time. I think that we are looking pretty good to having the support in the Assembly. I'm not in the Senate so I can't speak for them directly, but after next week we hope to put a great budget package on Gov. Evers' desk.

The governor has a very strong line-item veto authority. So if there are certain things that he doesn't like, he's going to be able to change that. I would hope that he would approve this budget because if he doesn't, that could delay the school systems, transportation, health care knowing what their funding is. That's money that would be going directly and immediately back into the economy.

Erpenbach: I think actually the budget may have to change in the Senate. I don't know if there's enough votes as it is right now to pass that in the Senate. So I expect it to change a little bit, but I really hope the Republican leadership takes the governor up on his offer to sit down and talk about the differences, rather than just putting a document on his desk that would be very hard to not partially veto just about all of it.

Even just transportation alone, the way the Republicans have it set up, it's not fair. Out-of-state drivers are off the hook when it comes to paying increases in gas taxes and it's something that I know the governor doesn't really appreciate. So I expect a change between now and the time it gets to his desk.