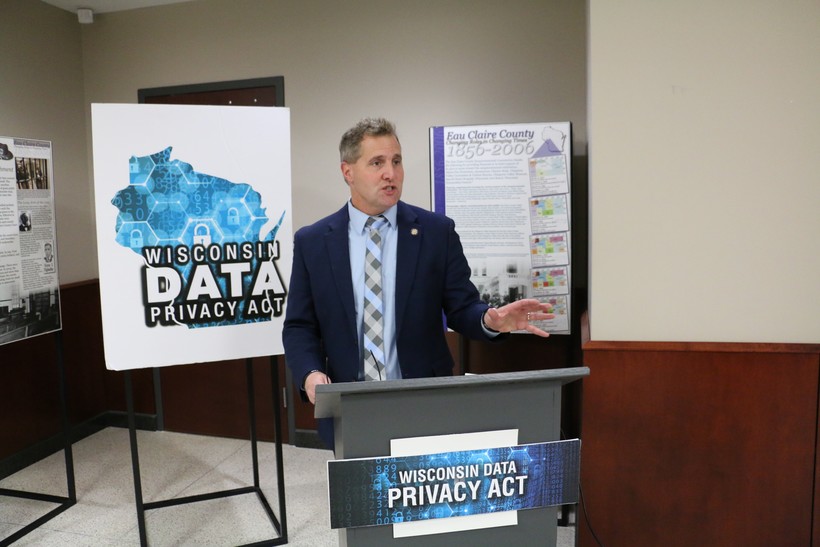 A western Wisconsin lawmaker is introducing legislation that would allow state residents to block tech companies like Google and Facebook from collecting their personal data. If companies violate the proposed law, they could face penalties of up to $20 million.

State Rep. Shannon Zimmerman, R-River Falls, is proposing three bills that would change the relationship between online consumers in Wisconsin and tech companies across the country.

At a press conference Wednesday in Eau Claire, he said the bills would give residents the right to ask any online data collector for copies of personal information collected from them and see whether it’s been sold to third-party companies. Data collectors would also be required to stop collecting personal data if asked by Wisconsin consumers.

Zimmerman said his bills will come with penalties if companies refuse to comply.

"If you are found in violation of this law, the attorney general can bring action against your company," said Zimmerman. "Fines can range anywhere from $10 million to $20 million if you are found to be malicious in your act."

Zimmerman said his bills go beyond a California law that went into effect this year, which allows residents there to learn what personal information is collected from them, their devices and their children. Zimmerman said that law doesn’t go far enough, which is why he modeled his bills after the General Data Protection Regulation legislation that took effect in the European Union in 2018.

"When they did that, the same basic rights that I’m talking about for data privacy became law in Europe," said Zimmerman. "And people could go online and make their request, and they were shocked and stunned at the level of information that was being tracked and recorded on them."

When asked if his laws might interfere with businesses in Wisconsin using personal information from customers to improve customer service, he said the example set in Europe shows it won’t.

"So, we know that this type of legislation is not prohibitive business," Zimmerman said. "Businesses can still operate. They can still do market research and conduct themselves in that matter."

Zimmerman’s bills began circulating for co-sponsorship Wednesday afternoon. At the press event in Eau Claire he said he’s already gained bipartisan support but wouldn't specify which Democratic lawmakers might be on board until the co-sponsorship memo makes its way through the state Capitol.