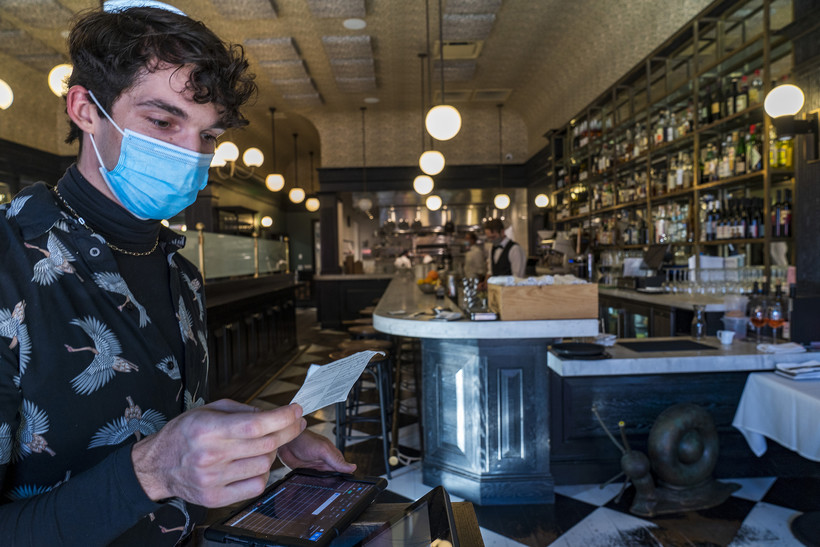 Restaurant host Joey Tyler verifies a patron's vaccination card at French restaurant Petit Trois in Los Angeles on Friday, Nov. 5, 2021. A vaccine mandate that is among the strictest in the country takes effect Monday, Nov. 8, in Los Angeles, requiring proof of shots for everyone entering a wide variety of businesses from restaurants to shopping malls and theaters to nail and hair salons. Damian Dovarganes/AP Photo

Multiple bills working their way through the Wisconsin state Legislature would ban businesses from requiring customers to have COVID-19 vaccinations. Opponents of the legislation in the Senate Committee on Health Wednesday pushed back against claims that such mandates amount to discrimination.

Discussion on the bills comes as Wisconsin continues to experience heightened rates of COVID-19 transmission as the omicron variant spreads. As of Tuesday, the state's seven-day positivity rate was above 27 percent.

Vaccine mandates have become increasingly common as the COVID-19 pandemic continues. Chicago is one of a number of U.S. cities to implement vaccine mandates for indoor spaces, and Minneapolis is following suit. Certain Wisconsin businesses have implemented their own requirements.

State Sen. Mary Felzkowski, R-Irma, speaking on Assembly Bill 299, which prohibits vaccination proof requirements, defended the bill as protecting people's personal freedoms while calling the various vaccines available an "experimental drug." That bill passed out of the Assembly in June of last year.

Reuters, in a fact check last year, found that claims about the vaccines being experimental were not true. All COVID-19 vaccines currently available in the United States have also been approved by the federal Food and Drug Administration.

Dozens of citizens came to the state Capitol to voice their support for the measures. Many said they were being discriminated against in their lives because of their decision to not receive the COVID-19 vaccines.

"If a person chooses not to receive a vaccine, especially one that is still in very young development, because they are not comfortable or cannot for health reasons, they should not be forced to do so to access basic life activities," Felzkowski said.

"Making a choice of having a vaccine or not having a vaccine is not equal to discrimination based on a person's color of their skin, their national origin, things of that nature," said Carpenter.

At the federal level, the Biden administration's vaccine-or-test mandate for businesses has been stalled while the U.S. Supreme Court hears arguments on its legality. A decision is expected soon.

The state bills are unlikely to become law. Gov. Tony Evers is likely to veto the legislation if it reaches his desk.