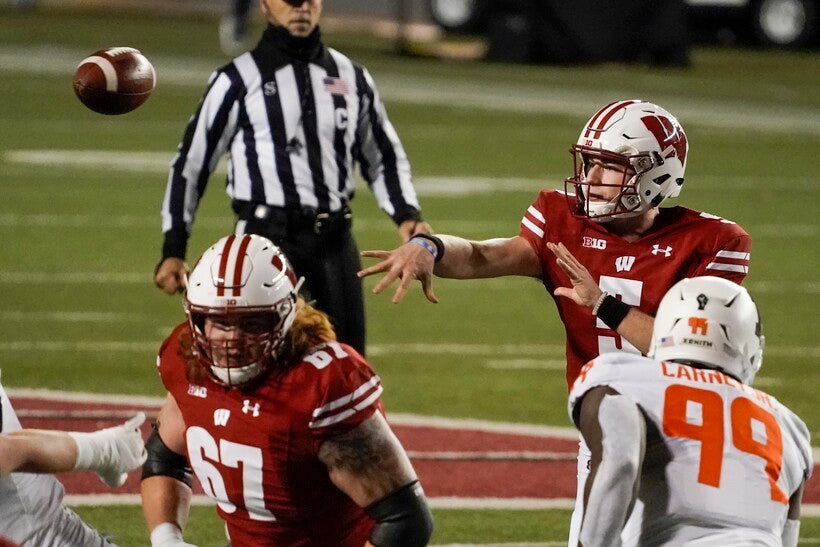 Two days later, a rapid test showed the Badgers’ new star could have COVID-19, according to the Milwaukee Journal Sentinel and the Wisconsin State Journal.

When the Big Ten announced it would play amid the coronavirus pandemic, daily testing was a central aspect of its safety plan.

"I think the challenge with how (antigen testing) is being used is that it’s not being used for symptomatic testing, it’s being used for asymptomatic screening, and we really don’t know how well it performs in that setting other than we know it has reduced sensitivity," he said.

If an antigen test comes back positive, the Big Ten requires a polymerase chain reaction, or PCR, test to be conducted. On Monday, Mertz waited for the results of that more accurate test.

Mertz was magical Friday in his first start as a Badger, throwing for five touchdowns and 248 yards, leading Wisconsin over Illinois.

If he does have the coronavirus, it would be a big loss for the No. 9 Badgers. Big Ten protocol requires coronavirus-positive players to sit out at least 21 days, even if they’re asymptomatic. That would mean Mertz could miss an important start against No. 13 Michigan.

Not to mention the possible long-term health effects of the coronavirus aren’t well known.

Since the Journal Sentinel and the State Journal published their reports, the University of Wisconsin-Madison’s Athletic Department has kept quiet on Mertz’ condition, issuing a statement Sunday citing medical privacy as the reason it won’t release coronavirus test results for any student athletes.

"No student-athletes, coaches or support staff members who participated in Friday’s game against Illinois recorded positive antigen tests or reported having any symptoms on Friday prior to the game," according to the statement.

This Saturday, the Badgers are set to take on the Nebraska Cornhuskers. Nebraska’s head coach Scott Frost said Monday his team has received false positives since it began conducting daily antigen testing. But just as rapid testing is more likely to turn up false positives, it also misses more positive cases than PCR testing, Garner said.

"We know there are now some very famous case scenarios, like the White House, where just doing daily antigen testing is not enough to stop outbreaks," he said.

It’s possible the conference saw its worst-case scenario come to pass Friday if Mertz played a game while contagious with coronavirus, Garner said.

The Big Ten has the strictest coronavirus protocols of any Power 5 conferences that’s currently playing football. If the conservative procedures help protect even one person, they’re worth it, said Badgers head coach Paul Chryst.

"The No. 1 concern for the league, and I appreciate this, was how do we best keep everyone as safe as possible regarding the virus, and then how do you manage the impacts of it when someone has it," he said.

No other conference requires players to miss 21 days after a positive PCR test. The Big Ten is studying the possible cardiovascular side effects of the coronavirus. Teams are required to cancel games, as well as a week of practice, if more than 5 percent of all tests are positive and more than 7.5 percent of players, coaches and staff test positive.

On Monday, Chryst said he’s confident Wisconsin will be able to play this weekend.

But despite stringent precautions from the Big Ten, Garner said it’s likely some coronavirus cases among players and staff are inevitable given the high number of COVID-19 cases in the Midwest. In fact, with cold and flu season approaching, he said university officials may need to start asking another question.

"How much community transmission is too high a rate to play any sports?" he said.