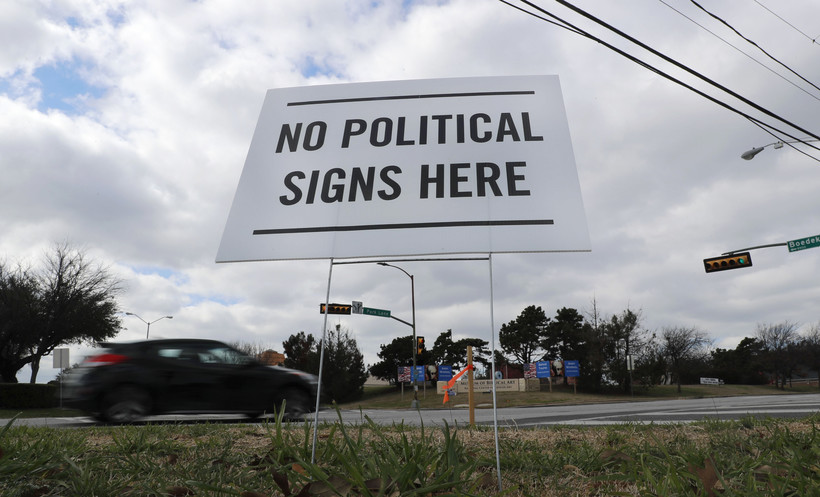 A sign warns candidates' supporters where not to place signs outside an official polling location during early voting in Dallas, Wednesday, Feb. 26, 2020. LM Otero/AP Photo

A New Study Of Civic Engagement In Wisconsin Finds Trends Toward Disconnectedness
By Rob Mentzer
Share:

Wisconsin has seen a "dramatic" decline in voting rates in recent years, and Wisconsinites are less likely than the national average to say they volunteer or do favors for their neighbors, a new study of the state's civic health finds.

The new "Civic Health in Wisconsin" study by the Center for Community and Nonprofit Studies at the University of Wisconsin-Madison represents the first time civic engagement data has been tracked statewide, said Mary Beth Collins, the center's director and one of the study's principal authors. It looks at data on Wisconsinites' connectedness to their communities using a range of measures, from volunteerism and voting to the amount of time spent with neighbors and friends.

Civic engagement is important, Collins said, because it represents the way people relate to those around them and our ability to come together to improve our communities.

"We want to live in a state where people find ways to civically participate that work for them, and that they do it ... across every neighborhood and community," Collins said.

By some measures, Wisconsinites are more connected to each other than the national average. More than one-third (35.8 percent) said they "participate in at least one group," compared to 27.1 percent nationally. Wisconsinites were seventh-most-likely in the nation to report that they "frequently talk with or spend time with neighbors" — 38.3 percent did this, compared to a national average of 33 percent.

But the state was 46th out of 50 states in reports that people "frequently do favors for neighbors," with just 7.4 percent saying this describes them, compared to nearly 10 percent nationally. And fewer than half of Wisconsinites (49.5 percent) said they "frequently spend time with people of different racial, ethnic or cultural backgrounds," compared to 56 percent nationally; the state was 37th in the nation in this measure.

Collins said many of the findings in the report call for more research, and in some cases self-reported data should be viewed skeptically. However, she said the data in the report also create a baseline from which the state can begin to measure progress.

Wisconsin votes at a relatively high rate compared to other states, the report finds — second in the nation, behind Minnesota. But the trend in Wisconsin is toward declining voter participation.

"Voter turnout in the 2016 election dropped by over 40,000 votes, the lowest turnout since 2000," the report finds. Declines were steepest among Black voters, but Latino, Asian and white voters all turned out in lower numbers in 2016 than they had in 2012.

In local government, rural Wisconsin has seen an especially acute decline in the number of candidates willing to contest elections to village boards or city councils. From 2008 to 2018, more than 44 percent of these boards became less competitive, the report finds. Collins called it one measure of how engaged people feel in their communities.

The protest movement against police brutality and racial injustice that has broken out across the state and the nation indicates a level of civic engagement that might challenge a finding of decline, Collins said. At the same time, though, she said sustained civic engagement would ensure that protests and protesters can translate the demonstrations into concrete actions.

"How do you take that energy and sustain it over time?" she said. "Like, hopefully some of those protesters will run for City Council" or other offices, she added, or simply will become more connected to other local efforts to make change.