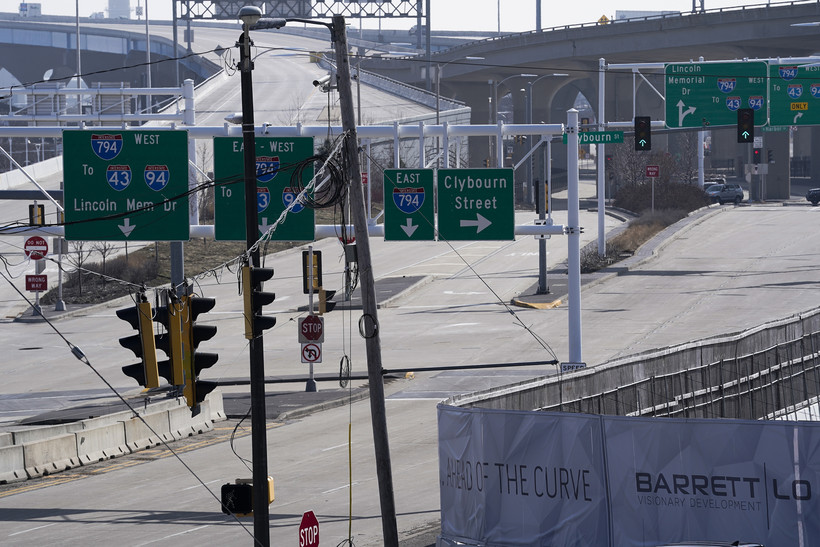 The onramp to the Hoan Bridge is void of traffic Tuesday March 24, 2020, in Milwaukee. Morry Gash/AP Photo

Report: Traffic On Wisconsin Roads Down Drastically Because Of Coronavirus Pandemic

Traffic Volumes Have Decreased Between 36 And 41 Percent Statewide
By Alana Watson
Share:

Traffic on Wisconsin roads has decreased dramatically because of the COVID-19 pandemic, according to a new report from the Wisconsin Policy Forum.

"We expected that the drop off in traffic would be most concentrated in the Milwaukee area and maybe the Madison area much more than other parts of the state where there haven’t been very many COVID-19 cases," said Joe Peterangelo, the Policy Forum's lead researcher. "But we actually found a pretty consistent drop off in traffic throughout the entire state."

The data was collected from 61 different locations along interstates and highways throughout the state by the Wisconsin Department of Transportation.

Data on traffic on local city streets is not known at this time.

According to the Policy Form, the decline could have potential impacts on the economy, public health, and traffic safety.

Forty percent fewer cars on the road could likely mean there are fewer crashes, injuries, and fatalities. Peterangelo told WPR the preliminary data for March of this year compared to March of last year suggests fatalities may not have improved, but he says it’s too early to tell.

"If people are driving faster — and speed is such a big impact on the likelihood of a fatality — it may not matter that there are fewer drivers on the road," Peterangelo explained. "It may still be just as many fatalities."

The drop in traffic could likely impact state revenue as well. Wisconsin has a gas tax of about 31 cents per gallon, so with people filling up at the pump less often, Peterangelo said, that could mean a financial hit for state government.

Without that revenue, the state may struggle to carry out those projects.

Peterangelo said the Wisconsin Policy Forum is going to keep track of the traffic information as well as look into other impacts of the coronavirus pandemic.

"Things like air quality," he said. "One of the silver linings is reduced driving may be improving air quality and there have been reports of that, but we don’t have the data to be able to talk about that."