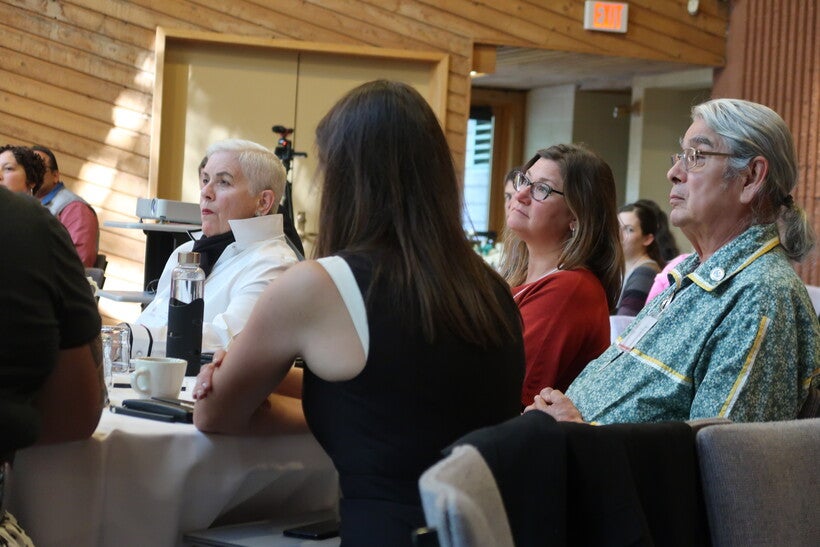 A new report from Northland College in Ashland recommends that the United States and Canada rewrite its principal agreement that provides a framework for improving water quality on the Great Lakes.

The white paper released Tuesday by the Mary Griggs Burke Center for Freshwater Innovation at Northland College highlights water quality concerns on Lake Superior — many of which appear to be driven by climate change.

The report, which stems from a September summit at Northland, details how the Lake Superior watershed has witnessed three 500- to 1,000-year floods in the last seven years, causing an estimated $150 million in damage across the region. In addition, it also cites the emergence of potentially toxic blue-green algal blooms associated with extreme storms, storm-related sewer overflows and erosion that exposed a segment of Enbridge’s Line 5 pipeline.

The U.S. and Canada committed to protecting and restoring the Great Lakes under the Great Lakes Water Quality Agreement in 1972, and it’s been updated several times — most recently in 2012. At that time, the two governments focused on a broader approach to the lakes' water quality issues through 10 annexes that separately address concerns ranging from invasive species to chemical pollution.

"What we are proposing is that we need to be taking a more holistic view at our water quality issues," said Valerie Damstra, the center’s operations manager. "Climate change isn’t something, for example, that’s an add-on. That’s something that affects all of the issues we should be looking at for protection of the Great Lakes."

The agreement was formed after the heavily polluted Cuyahoga River, which empties into Lake Erie, burned and prompted a public outcry to control contamination and restore water quality. Since then, the focus of the agreement has shifted with emerging concerns across the lakes, according to Sally Cole-Misch, public affairs officer with the International Joint Commission (IJC).

The binational commission is tasked with monitoring progress by both governments to accomplish goals set forth under the agreement. Cole-Misch said the commission will be including concerns that the agreement may need to be revised as part of its Triennial Assessment of Progress Report that could be released as early as next spring.

"We will be looking at that whole issue more carefully because the agreement specifies that after the third triennial report of the commission to the government and public that a review of the agreement must occur," she said.

The third triennial report, which would assess progress from 2020 to 2023, will gather input on the agreement. She added the extent of a review would be based on whether the governments and the public feel the current agreement is working. Cole-Misch noted previous updates of the agreement also requested a review of the binational commitment roughly every decade to a dozen years.

"Recognizing that the issues may change, the priorities may change, how our governments are operating may change so wanting to keep the agreement as dynamic and relevant as they can," she said.

Northland’s Damstra said they didn’t recommend a timeline for revising the agreement, but she noted the sooner, the better.

"It just makes it a little bit more difficult as resource managers to be working on these issues," she said. "With the way that the annexes are sort of written and everything’s compartmentalized, it implies that these things are not related and we know that that’s not the case."

A spokesperson with the U.S. Environmental Protection Agency provided the following statement in response to the report:

"The ten Annexes of the 2012 version of the Great Lakes Water Quality Agreement cover issues like nutrient loading, habitat protection and restoration, aquatic invasive species, and climate change impacts, and the current Agreement provides a fair amount of flexibility to the Parties and their many partners in determining how best to implement the Agreement to address new and evolving issues impacting water quality. While the U.S. is not currently considering a modification to the Agreement, EPA is always willing to listen to suggestions about possible improvements to the Agreement."

The Great Lakes are a source of drinking water to more than 40 million people. The lakes also support a $17.3 billion investment to the region's economy through shipping and a $14 billion infusion through tourism and recreation, according to the IJC.