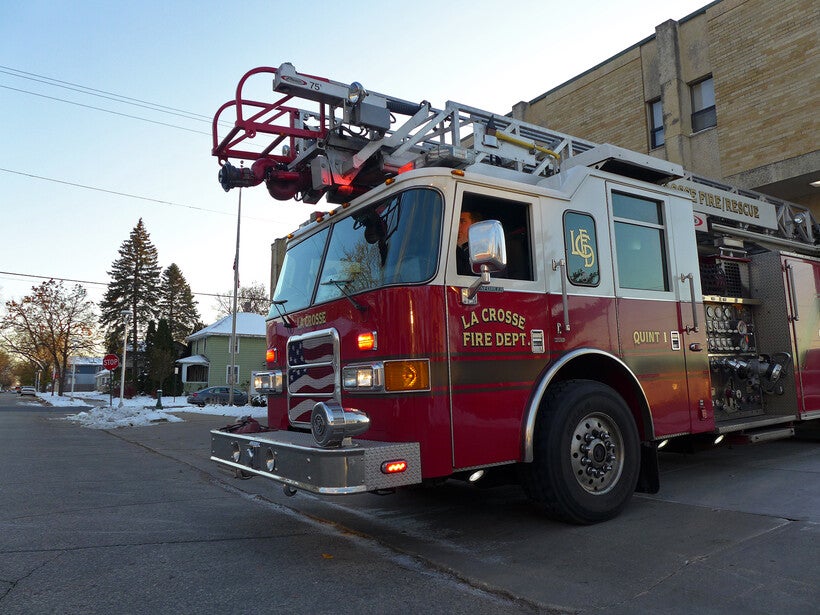 A report from the Wisconsin Policy Forum shows greater cooperation among fire departments in small communities could help address a shortage of first responders in the state.

The report looks at fire and emergency medical services in the La Crosse area. Commissioned by La Crosse County and the La Crosse Area Planning Committee, it looks at opportunities for the departments to share resources given the growing need for services in many of the communities.

Rob Henken, president of the Wisconsin Policy Forum, said the municipalities have all taken a different approach to how they staff their departments, from a 24/7 professional fire service in the City of La Crosse to departments that rely on paid on-call staff in the Town of Shelby.

"You sort of have different needs, which dictates different staffing levels and service expectations by citizens. And so sometimes that can be a barrier to looking at ways that communities can share services," Henken said. "In this case, we really saw some opportunity to sort of blend those staffing models, potentially, as the communities go forward."

Henken said small municipal departments, both in the La Crosse area and across the state, are increasingly under pressure to provide a higher level of service to their community.

Buck Manley, chief of the Holmen Area Fire Department, said that's been the case for the municipalities his department serves, which have seen a boom in new development and population growth.

"If they move to the (Holmen) area from a larger community, it's implied to them that they have a full-time, 24-hour staffed fire department," Manley said. "That's the goal, that's something that we’re working on. And I think the easier and probably a more cost-effective way to get there or at least to raise the level of service is to take a good hard look ... at what would be the benefits of collaborating with Onalaska and La Crosse and the other area departments."

Manley said a major challenge for his department and others in the area has been recruiting staff, both career and part-time or paid on-call.

"We’re basically all fishing in a similar pond or similar pool for similar trophy fish and everyone is looking for those good young talented early 20-something-year-olds to mid 20-somethings," Manley said. "It's not like we have a waiting list of 20 people trying to get on and we can be selective. We need to put more people on but there's not that many people available."

Manley said young people are also more mobile than previous generations, making it harder to hold on to staff.

Henken said recruiting and retaining emergency responders is a common problem for small communities across the state that rely on part-time and on-call staff.

Sharing staff recruitment and training in a way that reduces competition is one of the recommendations outlined in the Wisconsin Policy Forum report.

"Getting up to the level of service that their constituents are increasingly demanding — and that really has become more evident in terms of need with the COVID-19 crisis — getting there for a small community is just going to be prohibitively expensive," Henken said. "While without question there's still going to be the need for added investment, the amount of added investment will be less (for consolidated services) than it would be if these communities had had any notion of trying to get there by themselves."

Henken said the Wisconsin Policy Forum tried to present a "spectrum" of options that municipalities could take to share services moving forward.

For departments looking to more fully pool resources, the report suggests sharing new or existing stations and equipment. It also outlines a plan for a consolidated regional department.

"The notion of service sharing, or consolidation, typically has some political hurdles to overcome," Henken said. "We also found pretty clearly that if indeed these communities all recognize a need to make substantial additional investment in enhanced service levels, that this may be the most effective and efficient way of getting there."

The report estimates a consolidated department would cost municipalities about $2 million more annually than they are currently spending on emergency services. But Henken points out that plan includes the investments in new stations and additional staff that departments project they will need to make in the next few years.

The report estimates those investments will cost $2.8 million for municipalities to undertake the projects on their own.

"If you feel that yes, there are gaps there, that we need to do better in terms of our EMS response times, that we need to add capacity anyway because of our growing call volumes, then banding together would actually be more cost-efficient," Henken said.