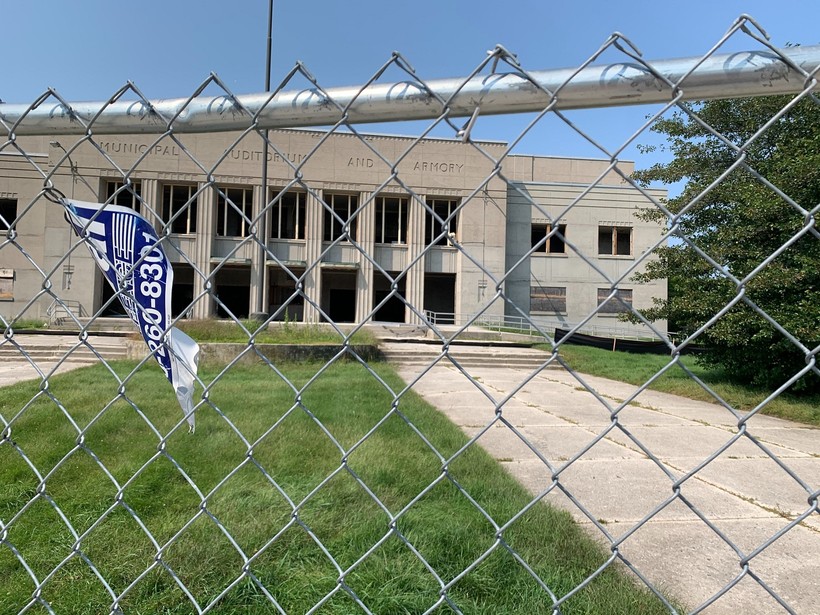 The view of the Armory taken from the Sheboygan Yacht Club as the early stages of demolition continue on Aug. 26, 2020. Megan Hart/WPR

A 2015 report identified hazardous substances on the site of the Sheboygan Municipal Armory near Lake Michigan, but contamination was only recently reported to the Wisconsin Department of Natural Resources at the request of state environmental regulators. Now, the DNR is directing the city to investigate and clean up the site.

The city, which is demolishing the armory, notified the DNR on Oct. 9 that volatile organic compounds (VOCs), polycyclic aromatic hydrocarbons (PAHs) and arsenic had been discharged from the site. On Wednesday, the agency sent the city a letter directing officials to hire an environmental consultant and submit a plan by Dec. 13 for investigating contamination.

A third party notified the DNR about a 2015 report detailing contaminants on site, according to Roxanne Chronert, a remediation and redevelopment supervisor for the agency. Regulators reviewed the information and asked the city to report the discharge immediately.

"Per the Administrative Code, once they have data documenting that there's been a discharge, they have 10 days to provide that data to us," said Chronert. "But they're supposed to make an immediate notification to the department."

PAHs and VOCs are often produced by burning fuels like coal, wood or petroleum, while arsenic is a naturally occurring element that was often used in wood treatment. Long-term exposure to the substances have been known to potentially cause cancer and other health effects.

The chemicals and metals were identified in the second phase of a 2015 environmental site assessment that was conducted by Stantec Consulting Services due to the property's historic use as a lumberyard before the armory was built in 1941. The report outlined the results of soil and groundwater sampling at the site that's located near the Sheboygan River and around 350 feet from Lake Michigan.

The consultant found PAHs, VOCs and metals were present in soil and groundwater samples beyond state standards in some areas. For example, benzene and arsenic levels were found in soil samples above the DNR's residual contaminant levels for groundwater protection, but groundwater samples showed neither exceeded state enforcement standards. Chloroform and bromodichloromethane, often found as byproducts of chlorinated drinking water, were detected above state standards.

Stantec concluded contaminant levels are "relatively low and do not appear to be widespread." Yet, the consultant noted additional sampling may be required to determine the extent of contamination and recommended the city submit a copy of its report to the DNR to "maintain compliance" with state law.

The city's planning and development director Chad Pelishek said in an email that he couldn't confirm the exact date the city received the report but assumed it was sometime in 2015. He said failure to submit the findings to regulators "appears to be an oversight on the part of the city."

Sheboygan native Tara Wurtz notified the agency about the 2015 environmental site assessment around three weeks ago. She uncovered the findings while working to save the armory from demolition as the city seeks to redevelop the site.

Wurtz accused the city's planning director of intentionally withholding the report from the state. She also expressed concern over water that was, until recently, being pumped from the building into the city's storm sewers as the armory has experienced flooding due to high water levels.

"This could be in the drinking water," said Wurtz. "This could affect the fisheries."

Once the DNR learned of contamination, Chronert said the agency's wastewater officials worked with the city to redirect water from the building to the sanitary sewers to ensure it would be treated before release. The water in the building was not located near contaminants that were discovered in 2015, although the full extent of contamination is not yet known.

"That's why we're asking them to give us the work plan to investigate," said Chronert.

Wurtz is also questioning whether demolition work began before a permit was issued. She wants the city to halt the project while further sampling is conducted.

Chronert said the state issued an asbestos abatement permit for the demolition in 2017, which was updated on July 31, 2020. The DNR has found no violation of those permit conditions. Chronert said the investigation into contamination doesn't require the city to halt demolition as part of the site's remediation.

Wurtz has also filed a complaint with the federal Occupational Safety and Health Administration, alleging safety or health hazards for workers involved in the demolition who may be unaware of the contamination. The workplace safety agency said an inspection will be conducted as soon as possible.

The Madison-based Midwest Environmental Justice Organization has been working with Wurtz to obtain information about environmental conditions on the site. Executive Director Maria Powell said it shouldn't take a concerned citizen to ensure hazardous substances are addressed. She agreed the armory's demolition should be stopped until more is known about the scope of contamination on site.

"It's not right that this wasn't discovered until years later," said Powell. "And, as this building's coming down, who knows what already went into the lake and the river."