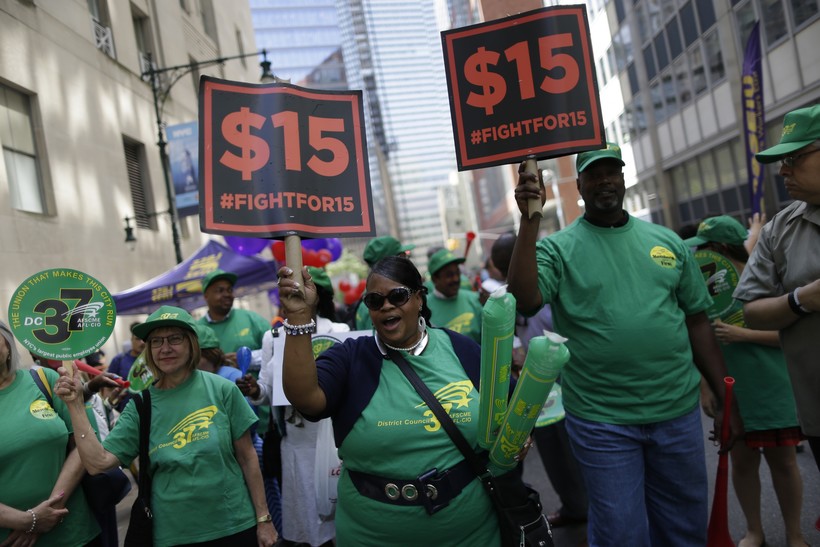 Activists cheer during a rally after the New York Wage Board endorsed a proposal to set a $15 minimum wage for workers at fast-food restaurants with 30 or more locations, Wednesday, July 22, 2015 in New York. The increase would be phased in over three years in New York City and over six years elsewhere. Mary Altaffer/AP Photo

Half Of Black And Hispanic Workers In The State Would See Wages Rise
By Rachael Vasquez
Share:

A new report from a think tank at the University of Wisconsin-Madison finds that raising the minimum wage to $15 an hour would help three out of 10 Wisconsin workers, and work to close racial and gender pay gaps in the state.

The report, from the Center on Wisconsin Strategy (COWS), finds that 843,000 workers — or 21 percent of workers in the state — currently make less than $15 an hour and would be directly impacted by a boost to the minimum wage.

Another 257,000 Wisconsin workers — or 9 percent — earn only slightly more than $15 an hour and would likely get pay increases if the wage floor rose.

The report relies on data compiled by the Economic Policy Institute, which analyzed a congressional plan to raise the federal minimum wage to $15 an hour by 2025.

It also finds that wages would increase for half of Black workers, just over half of Hispanic workers and more than a third of working women in Wisconsin.

"You can see that even though it's a universal policy ... it raises the wages and brings towards the middle, workers who are disproportionately at the bottom — and that's Black and brown workers and that's women workers," said Laura Dresser, associate director of COWS.

Chris Reader, senior director of workforce and employment policy with Wisconsin Manufacturers and Commerce, said the group doesn't currently support an increase in the minimum wage at any of the proposed levels.

"We think it would make more sense to focus on ways to help workers ... achieve better careers and life skills rather than just forcing a higher wage through the minimum wage," Reader said.

The COWS report found that, had the minimum wage kept up with productivity gains over the last 50 years, it would currently be $22 an hour.

Opponents of the federal proposals have also argued that raising the minimum wage right now would particularly hurt small businesses, many of which have already seen their revenue decimated during the pandemic.

A recent report from the nonpartisan Congressional Budget Office estimated the same federal legislation that would boost the minimum wage to $15 an hour by 2025 could result in 1.4 million job losses. But some economic experts have disputed that finding, arguing the report uses outdated economic research.

Sean Raffaelli, owner of McCarty Park Sports Pub and Grill in Milwaukee, said the proposal to increase wages gradually through 2025 would make things easier for businesses. But, Raffaelli said he'd likely have to cut hours for his workers if the minimum wage was raised to $15 an hour, and he was doubtful that he could simply pass the extra costs of labor on to his customers.

"I don't know how many people are going to pay $8 for a beer because your wages went up 50 percent," Raffaelli said.

Nationally, polls have shown a majority of Americans support increasing the minimum wage to $15 an hour.

The most recent Wisconsin polling on the issue was done by the Marquette University Law School Poll in 2019. At that time, about 56 percent of Wisconsinites supported raising the minimum wage, although the poll didn't stipulate how high. Support for increasing the wage floor was at 29 percent among Republicans, while 51 percent of independents and 85 percent of Democrats in Wisconsin supported the increase.