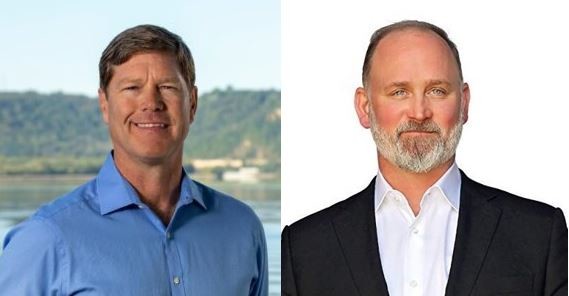 Democrat-Held 3rd Congressional District Has Been Target For GOP
By Rob Mentzer
Share:

Candidates in Wisconsin's most competitive congressional election had sharp exchanges over mask-wearing, the U.S. pandemic response and health care coverage in a debate Monday.

U.S. Rep. Ron Kind, D-La Crosse, has represented Wisconsin's 3rd Congressional District since 1997. His Republican opponent is retired Navy SEAL Derrick Van Orden of Hager City. The virtual debate was hosted by Wisconsin Public Radio and the Eau Claire Chamber of Commerce, and was broadcast on WPR stations throughout the district.

Van Orden has held a series of large campaign events in the district, even as coronavirus infections have spiked in Wisconsin. Kind called that a failure of leadership.

"Unfortunately, my opponent is still fond of going to large group gatherings without wearing a face mask, shaking hands, hugging people — all the things that our public health directors and our health care experts are telling us not to do," Kind said.

Van Orden responded that COVID-19 is "real" and "has been devastating to our population." But he also said of his campaign that "we engage with American citizens at their level of comfort," including by making in-person appearances with face masks optional.

Van Orden also emphasized federal efforts to develop a vaccine and advances in treatments for the disease and did not discuss mitigation measures such as mask-wearing.

"Ten months after this virus landed on our shores, we still lack a national plan and a national strategy to defeat this virus, and it's because of the politics that have been played around it," Kind said.

Van Orden has run as a strong supporter of the president. In Monday’s debate, he touted pre-pandemic low unemployment rates and said Trump "has been able to accomplish more things, with the greatest adversarial relationship with the press of any president in the history of the United States. Can he speak brashly at times? Of course. But look at the man's accomplishments."

Kind has built his reputation as a moderate and consistently touts his bipartisanship. DW-NOMINATE, which tracks members of Congress by ideology, rates Kind as more conservative than 80 percent of House Democrats.

He has also rarely, in recent years, faced a serious challenge in the district. But after rural Wisconsin voted heavily for Trump in 2016, Kind has become a target for Republicans this year. Trump won Kind’s district in 2016 by about 5 points, but Kind was easily reelected that year because he had no GOP challenger. Then in 2018, Kind defeated his Republican opponent by nearly 20 points.

Another point of contention in Monday’s debate was the Affordable Care Act. The Trump administration has backed a lawsuit at the U.S. Supreme Court that could throw out the 2010 law in its entirety. In an interview last week, Trump said he favors ending the law. Trump has frequently said Republicans will replace it with something better, but no GOP plan has emerged.

In the debate, Kind said his opponent, like the president, would see the law repealed without ensuring protections for people who have health issues, or alternatives for those who gained insurance through the law.

"That's an incredibly dangerous game you're playing with the lives of Wisconsinites," Kind said.

Van Orden stressed he favors protections for those with pre-existing conditions.

"I will not sign on to any program, ever, regardless of who wrote it, if it does not have rock solid provisions to cover people, including our seniors, with pre-existing conditions," Van Orden said.

Watch a video of the entire debate here.