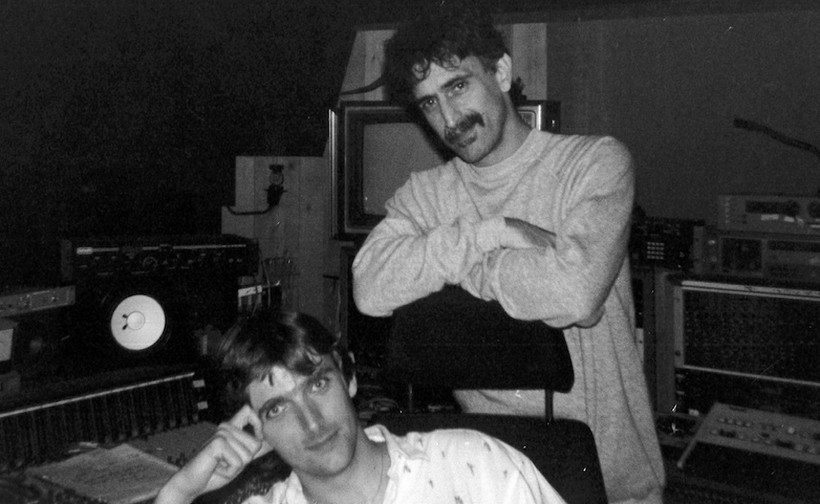 'Relax': How a Frank Zappa fan became friends with his idol

If you’re a music lover, at some point, you likely had the fantasy of becoming friends with your idol. Hanging out, talking on the phone and long serious conversations about music, art and life over a cup of coffee at the kitchen table.

That’s what happened to Co de Kloet after he met his musical hero, Frank Zappa. de Kloet talked with Wisconsin Public Radio's "BETA" about his book, "Frank & Co," which chronicles his meetings with Zappa from 1977 to 1993, using transcripts of conversations and descriptions of events in de Kloet’s life that had him and Zappa crossing paths during that time.

It all started in the early 1970s when de Kloet heard the album "Freak Out" by Frank Zappa and Mothers of Invention.

"I played that record repeatedly at the age of 12," he said. "My musical life changed instantly, and I said, 'What is this? I don't get it. I don't understand it. But there's something to it that I must explore.'"

A concert in 1973 sealed the deal, and de Kloet became a dedicated fan of Zappa’s music.

"I went home, and I was shocked because it was a mainly instrumental show. I was bewildered, and I said, 'If ever I get to meet this man, I'm going to tell him what an impact this show had on my life,' not knowing that four years later, we would become friends," de Kloet recalled.

As luck would have it, de Kloet's father was a renowned radio personality in the Netherlands and, through his connections, made arrangements for de Kloet to meet Zappa while on tour in 1977.

"I was very nervous. The sliding door of the little hotel lobby opened, and a guy walked in with hair like an Italian businessman. Small mustache, tiny goatee, an extremely expensive jacket, and a business suitcase. An Italian manager, CEO-type looking guy," de Kloet said. "I was so baffled and nervous, and I said, 'Are you Frank Zappa?' And he looks at me like, who is this? And where's my bodyguard?

He said, 'I sure am,' and he went into the elevator. I thought, 'Oh, I blew it.' The Warner Brothers guy comes in and says, 'Come with me.' So we go up, and he says, 'Frank, can I introduce you to somebody? This is Co, and he is probably one of your biggest fans in Holland.' And Frank looks at me and says, 'And you still had to ask if it was me when you saw me in the lobby?' I said, 'Oh, I, I, I, and he said, 'You were being careful, huh? OK, relax,' and we had a very nice talk."

That would be where the story ends for most of us, but not for de Kloet. He went on to a successful career as a producer and interviewer on the radio and had the opportunity to talk and work with Zappa later on.

In 1979, during one of their conversations, Zappa handed de Kloet a note with his home address in Los Angeles and told him:  "At this address, there’s always a cup of coffee waiting for you."

In 1980, Zappa asked de Kloet to supervise the audio mix of a live concert for broadcast in the Netherlands. And so their professional relationship began, which materialized in several projects over the years. Mostly though, they talked about art, politics and, of course, music.

During one long phone conversation in 1989, Zappa, seemingly as an aside, told de Kloet he had cancer.

de Kloet and Zappa worked together again in 1990 on a project for Dutch radio detailing Zappa's career in celebration of his 50th birthday. Their last project came in 1992 when Zappa offered de Kloet the opportunity to broadcast a concert of Zappa's, "Yellow Shark."

The two men met one last time in the summer of 1993. Zappa was frail. de Kloet could only stay for a short time, but even so, Zappa still managed to surprise him.

de Kloet remembers Zappa saying to him: "You came for that cup of coffee."

"That was one of the most intense moments of my life," de Kloet said. "I said, 'How can you remember that?' A person who meets 500 people a day, handing me a note in '79 inviting me for a coffee and referring to it as, 'that cup of coffee.'"

That was the last time de Kloet would see Zappa, who died of prostate cancer in 1993. He was 52 years old.

The music of Zappa is still as vital as it was when he was alive, maybe even more so. de Kloet thinks there’s a good reason for that: "It's the honesty. It's honesty without compromise."

And he should know because he was, after all, Zappa’s friend.