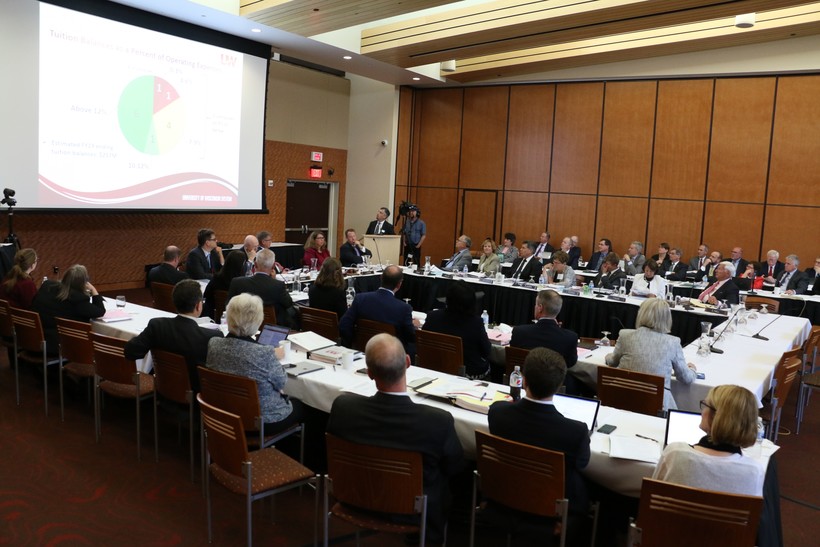 Student Fees, Room And Board Rates Up Slightly While Tuition Freeze Continues For 7th Year
By Rich Kremer
Share:

The University of Wisconsin Board of Regents has approved a $6.3 billion budget, which includes increases in student fees and room and board rates at most UW campuses.

The 2019-20 budget spends $31.7 million more than the prior school year's budget despite continuation of a freeze on tuition increases imposed by state lawmakers in 2013. It includes an additional $22.5 million approved by the state's budget-writing Joint Committee on Finance, which is being held by lawmakers until the UW System submits a plan to the JFC showing how the money will be spent.

The UW System budget includes a seventh consecutive year of a tuition freeze imposed by lawmakers in the 2013-14 academic year.

Regents approved the budget unanimously with two urging stronger action to persuade lawmakers to lift the tuition freeze. Regent Bob Atwell said it "takes a brave legislator" to vote to lift the freeze. Therefore, he said, it’s incumbent on the board to use the process it has to have a more informed discussion about the freeze publicly.

"I just think it's critical that we help the Legislature arrive at a different conclusion in the next biennium," said Atwell.

Regent Tracey Klein agreed saying that the board needs to remind lawmakers that state statute gives Regents the authority to set tuition.

"I really do think it’s time to take this issue up and do it in a concerted and forceful way with a plan behind and hopefully persuade the Legislature to restore the power to set tuition with this board," said Klein.

Republican lawmakers first began calling for the UW tuition freeze after a memo was published by the nonpartisan Legislative Fiscal Bureau in 2013 that showed the system had cash reserves of $648 million. Of that, $414 million came from tuition. This empowered lawmakers to enact the freeze and cut funding to the UW System in state budgets.

During Thursday’s regents meeting, Nelson, the finance vice president, said since then, total unrestricted fund balances held by the UW System have declined from $1.06 billion in 2013 to $752.1 million in 2019. Nelson said current fund balances work out to 12 percent of the total UW budget.

In May, the JFC approved two percent pay increases for state employees including those working for the UW System. The first would take effect in 2020 with another taking effect in 2021. Those pay increases must still be approved by the Joint Committee on Employment Relations.

Though the raises were approved, lawmakers on the JFC only allocated funding to cover 70 percent of the cost. That means the UW System and individual campuses must come up with the other 30 percent, which works out to $16.3 million over the 2019-20 academic year.

Editor's note: This story has been updated to attribute a quote to Regent Bob Atwell and state UW System's 2013 unrestricted fund balance was $1.06 billion. WPR regrets the errors.