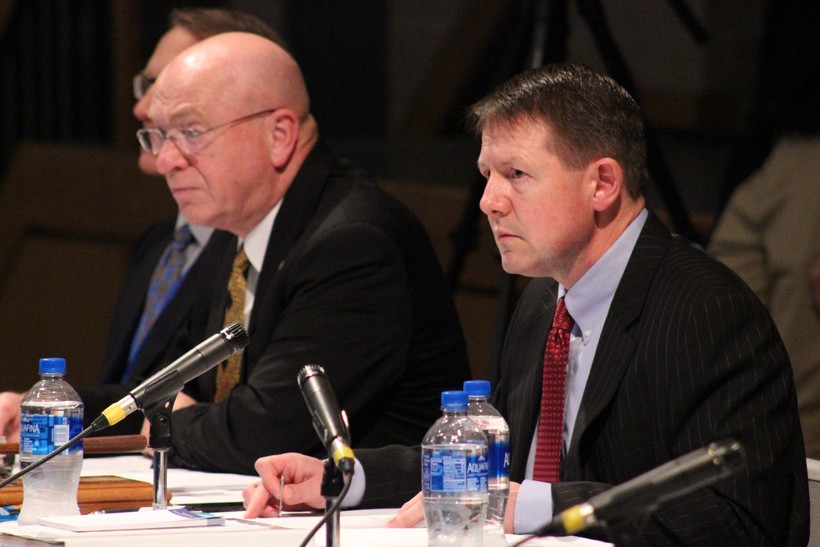 UW-Regents Approve Changes To Streamline The Hiring Of System Leadership

Going forward, hiring committees will be limited to 10 people, of those 10 members, half will be made up of regents. All but two of the 18 member board are political appointees of the governor.

Board of Regents President John Behling said cutting the size of the hiring committees is about streamlining and speeding up the process.

"We felt it was important for the process to move quickly. When I sat through my first search and screen committee … (there were) 24 people," said Behling. "It’s hard to schedule 24 for a meeting, much less have a productive discussion."

UW-Stout Chancellor Bob Meyer was part of a work group that recommended the changes to UW System hiring practices. He said one proposal would have eliminated local representation during chancellor searches, something he opposed. The final language allows the UW-System president to appoint five non-regent members to the committee including two faculty, one staff representative, one student and one community member or alumni. Meyer said that adds weight to which campus voices get picked.

"It will put some pressure on us to be very careful about who’s selected and we want to have the most knowledgeable people on there," said Meyer. "So, we don’t have the luxury of having as many local representatives on that committee as we used to."

Also, following changes in state law that were part of the state budget, regents prohibited campuses from requiring potential chancellors to have doctorate degrees or tenure at a university. Behling said the aim is to bring in more private sector diversity.

"I think academia can be learned and I also think that we can learn a lot from the private sector," said Behling. "On the other hand, if the academic is the best candidate, by all means, that’s who the board plans on hiring. It’s just an opportunity to look at candidates outside of academia."

During their meeting, which took place on campus at UW-Stout in Menominee, Wisconsin, a number of regents gave examples of private sector professionals leading universities and systems across the country.

Meyer said he thinks someone with a business background could make a great university leader but going through the process of getting a doctorate degree teaches a person about how to conduct research. He said the understanding about how to conduct a research study is critical in teaching undergraduate students, even at a polytechnic university like UW-Stout.

"There’s a hole there if you don’t have it but you could bring other things to the job that actually compensate for that," said Meyer. "I think if you’re willing to staff up for your cabinet in a way that compensates for that I think you’ll be OK. The problem right now is that the new law that’s in place basically says that even at the cabinet level you’re not able to require it."

After a short discussion, regents overwhelmingly passed the recommended changes to UW System hiring practices. Regent Tony Evers, who serves on the board because of his role as state superintendent of schools, was the only "no" vote. Evers, who is also running as a Democrat against Gov. Scott Walker, called the changes a solution seeking a problem.

"It concerns me greatly that we are diminishing voice when we should be increasing voice. So, I will be opposing this," said Evers.

On Friday, regents will consider a resolution that would give chancellors the ability to expel students found to be repeatedly disrupting the freedom of expression of other students or speakers. That change mirrors legislation introduced by Republican Rep. Jesse Kremer, R-Kewaskum.

He and other republican lawmakers have accused liberal activists on campuses in Wisconsin and across the nation from shouting down conservative leaning speakers.