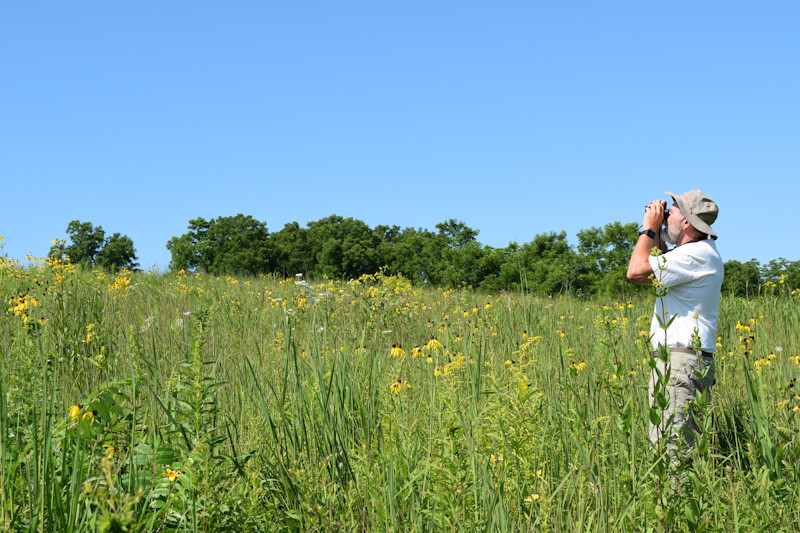 Rich Henderson on the Schurch-Thomson Prairie outside of Barneveld, Wisconsin. Mary Kate McCoy/WPR

The Regal Fritillary Is In Danger Of Going Extinct. Why Haven't More People Heard Of It?

Once Common On Wisconsin's Landscape, The Regal Fritillary Has Seen Systematic Loss Over Last 30 Years
By Mary Kate McCoy
Share:

To find out more about this rare insect, I traveled to a restored prairie outside of Barneveld in southwestern Wisconsin with my guide Rich Henderson, a board member of the Prairie Enthusiasts and a former state Department of Natural Resources ecologist.

It’s a beautiful summer day. The temperature is pushing 80 degrees, the sun is shining, the air is still — the conditions are perfect for butterfly watching.

It was a slow start when we set out. There were several close calls — mostly me thinking every orange and black insect with wings was the elusive butterfly — and a few that turned out to be monarchs, a larger butterfly missing the white underwing that distinguishes the two butterflies. 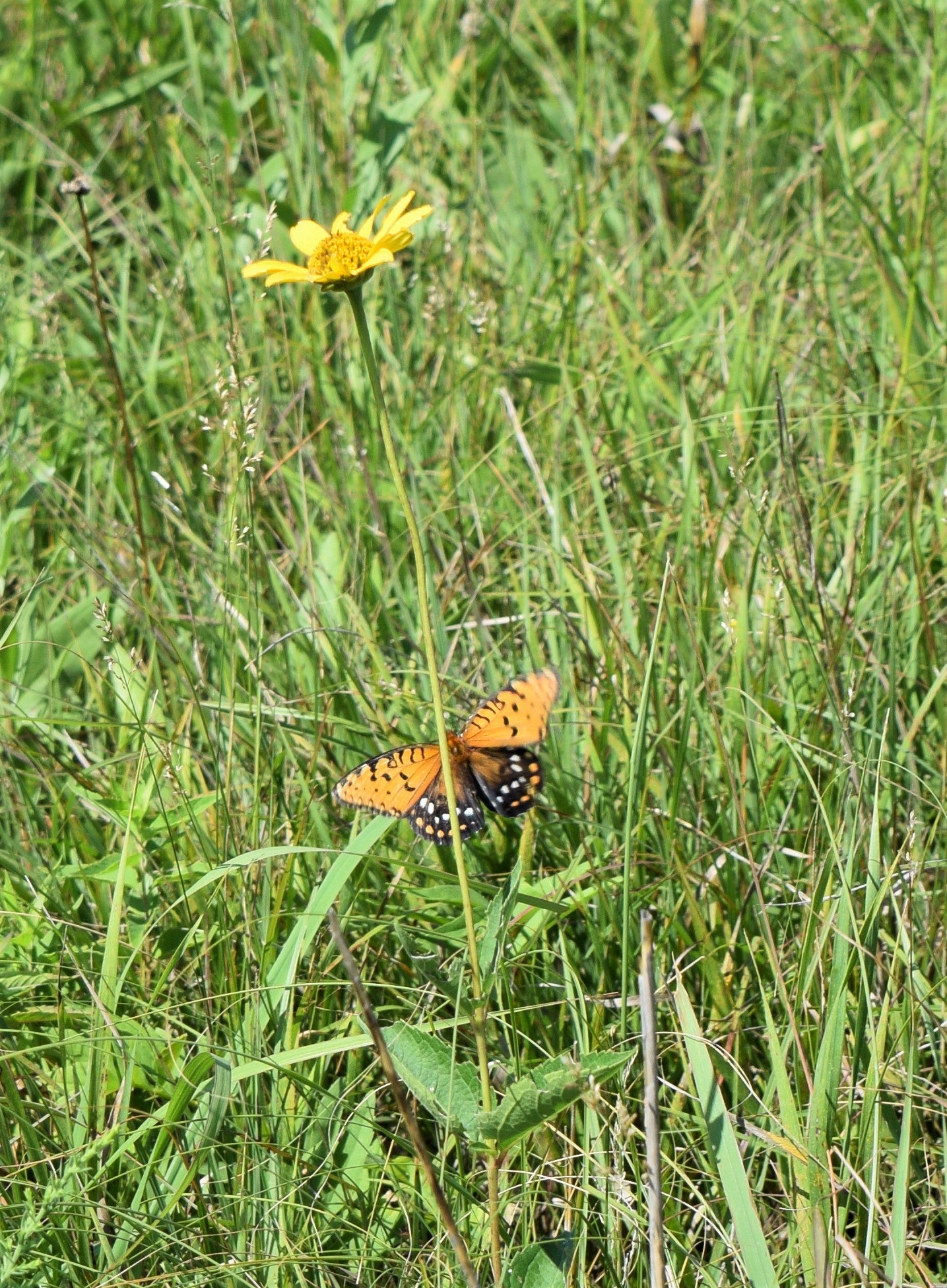 Once we saw one regal, we saw another and another. Once spotted, the butterfly’s characteristic low hop and dive movement is fairly easy to catch.

I counted five regals during our outing.

The regal is a striking butterfly that is in danger of going extinct. So what gives? Why haven’t more people heard of it?

Or perhaps another way of asking the listener’s question, why do monarchs get all the attention?

"When something's that well-known and popular and it starts to decline, it resonates with people," Henderson said. "Regal fritillaries have been so rare for so long, a lot of people don’t know they exist."

Think back to your elementary school science class, he said, what insect was used to illustrate metamorphosis? The monarch.

That isn’t to say the monarch isn’t deserving of the attention and support. But the reality is, the regal is far more endangered than the monarch.

Beginning in the 1950s, regals were gradually declining in their northeastern range, moving south. From the late-1980s to the early 1990s their decline was particularly drastic.

Overall, their numbers and range are down more than 99 percent. Since 1970 alone, regals have lost 40 percent of their historic range.

While the regal is state listed as endangered, federally it's only considered a species of concern, despite its extreme decline.

"A lot of people don’t know they exist, but at one time, 100 years ago, regal fritillaries were as common as monarchs on the landscape ... the past 30 years, have been just systematic loss, loss, loss, loss," he said. 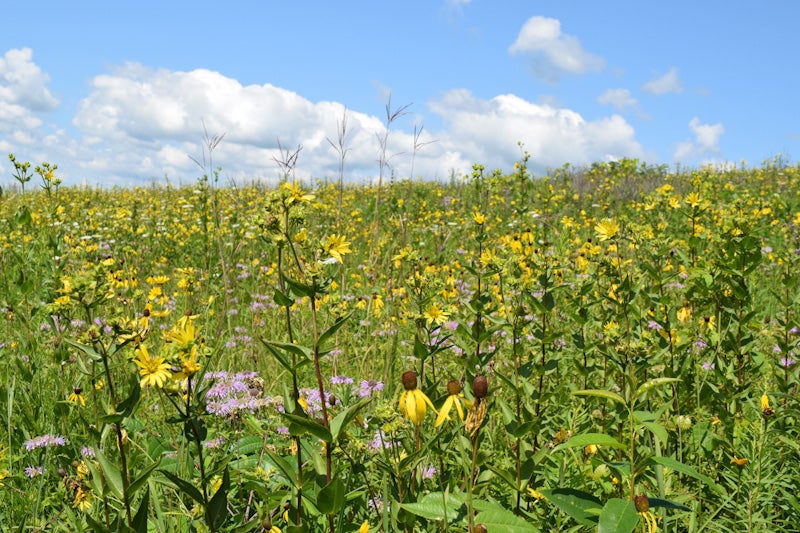 And bigger picture, it’s not one species that needs to be saved. It’s an entire ecosystem.

The insects are rare because the prairie ecosystem is rare, said Jay Watson, a conservation biologist at the DNR.

"(The landscape) was intact," he continued. "But now it's like the island effect where they wink out here and there's no way to recolonize. So then they're gone from that site, then they're gone from another site. All those little events add up, and all of a sudden the species is going down the extinction vortex."

While there are a few regal butterfly communities still hanging on around Wisconsin — primarily in Iowa, western Dane, Monroe, Portage and a little into Jackson counties — regals have all but disappeared east of the Mississippi River. Oklahoma, Kansas and Nebraska are the only strongholds left, Henderson said.

Helping regals is a little trickier than planting milkweed for monarchs, Watson said. Regals are picky about their habitat. They need lots of open space and lots of violets to lay their eggs.

When the females lay their eggs, they don't specifically lay them on the violets — they can sense violets are near, but they don’t seek out the plant. Henderson estimates they need about three to six violets per square meter of prairie to support their eggs.

"Violets will come from seed easy, but we need pounds of seed when you’re planting hundreds of acres," he said. "So we’re trying to grow violets ... and we’re being successful, but the violet plant in production only lasts two years at most."

It’s not uncommon for prairie insects to specialize in one plant, Henderson said. Years of evolution have allowed them to overcome the plant’s barriers and defenses. And once they’ve done that, they essentially claim the resource for themselves.

But that specialization can have catastrophic consequences for the regal.

"The downside of that is if something happens to that plant, they’re in trouble because they don’t necessarily jump over to other plants," he said. 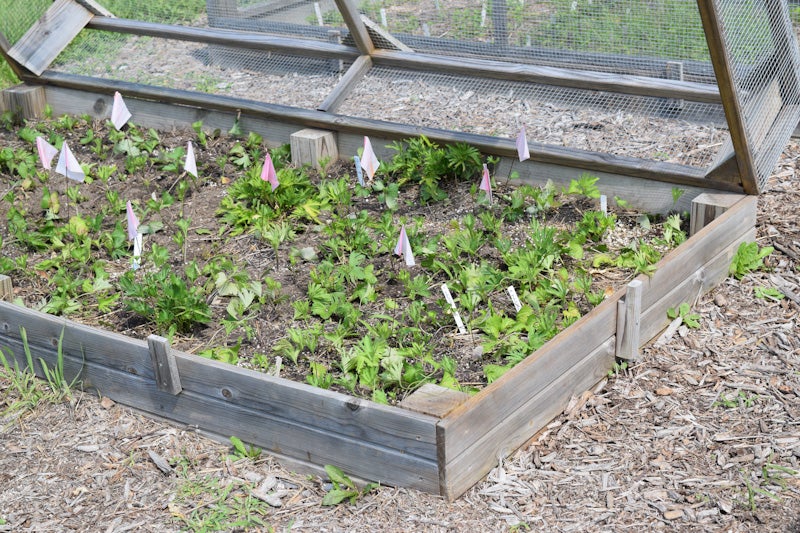 A violet nursery at the Schurch-Thomson Prairie. Mary Kate McCoy/WPR

It’s been a good couple of years for regals and other butterflies, Watson said. But it only takes one extreme season to knock them out of a site.

"Diseases, extreme weather events, climate change, invasive species ... they're not adapted to pesticides, we know a lot of these pesticides are impacting them but we don't know the extent," Watson said. "There's a lot of different variables."

For a time, regals were persisting in areas that were grazed, like where farmers kept their cows, Watson said.

"If they weren't grazed too intensely, there were still enough violets, and enough of that intact (prairie) system left," he said.

Different types of management could benefit the regals, Watson said. The first step is being aware of the different requirements species need to live out their life cycle.

And for regals, that means more intact prairies. 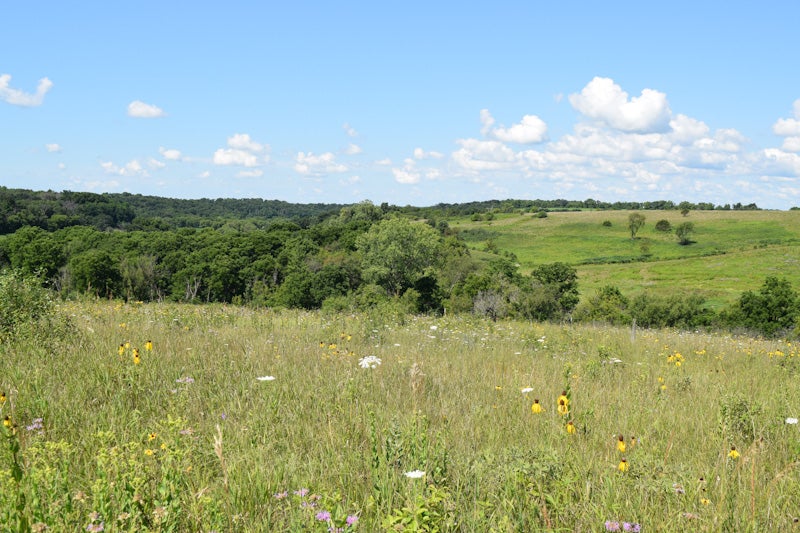