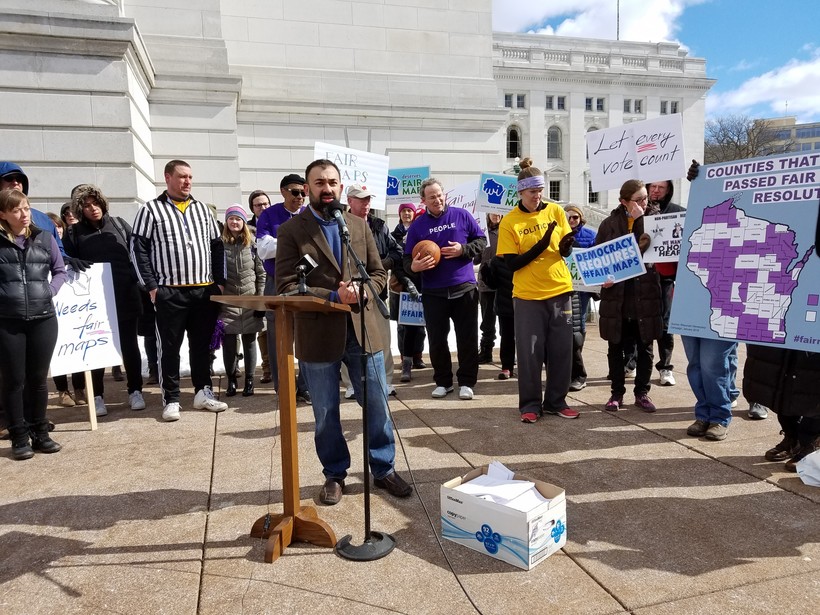 Advocates who want to change the way Wisconsin's legislative district lines get drawn are going to new lengths to tell the public that the current system is unfair.

They staged a basketball game outside the state capitol building Wednesday between the "People" and the "Politicians."

The "Politicians" team had all the advantages: more players, a lower hoop, and a referee who was on their side. The "People" team lost. It wasn't even close.

See, the politicians outnumber the people and the ref is on their side. pic.twitter.com/XmsmDiv7C0

"What you just saw here was a rigged game, which is just like the rigged system that we have here in Wisconsin to draw the maps," said Sachin Chheda, director of the Fair Elections Project.

Chheda's group is one of several who staged Wednesday's game to call for passage of a bill that would create a nonpartisan redistricting process in Wisconsin.

"We want our maps to be drawn in the public domain with public input," said Renee Gasch, an organizer for Citizen Action. "We want our races to be competitive and contested so that new candidates feel like they have a fair shot at winning and all candidates have to earn our votes."

Under current law, district lines are drawn by the Legislature and signed into law by the governor.

If that process breaks down, then courts end up drawing district lines. But when one party controls all of state government, as Republicans did in 2011, its members can draw legislative districts that give them a political edge.

The Fair Elections Project and other groups are currently challenging Wisconsin's map before the U.S. Supreme Court. They argue the map drawn by Wisconsin Republicans in 2011 was so partisan it violated the constitutional rights of Democratic voters.

Experts say the court may not issue a decision until late June, and that even if plaintiffs prevail, justices likely won't order new district lines drawn before the 2020 election cycle.

"You can't have an election under unconstitutional maps," Chheda said. "If peoples' rights are being deprived, you have to solve that issue."