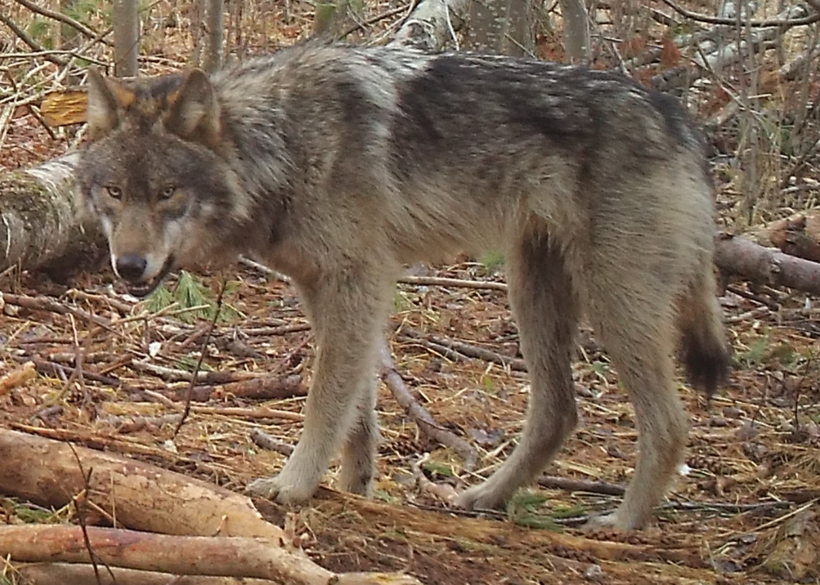 A trail camera captures a photo of a wolf in and around the Red Cliff reservation.

Information Will Be Used To Learn More About Wolf Prey And Behavior
By Danielle Kaeding
Share:

One northern Wisconsin tribe will begin trapping and tracking wolves in the Bayfield Peninsula this fall.

The Red Cliff Band of Lake Superior Chippewa received a roughly $75,000 grant from the Bureau of Indian Affairs to help the tribe track wolves. Jeremy St. Arnold, tribal wildlife and forestry biologist, said the money will pay for traps and satellite collars to pinpoint wolf movements.

"We’re curious if they harass farms, if they harass bear dogs and things like that," he said. "We’re trying to mitigate conflict and learn as much about these packs as we can."

The tribe plans to collar two packs this fall and expand wolf-tracking as more funding becomes available. St. Arnold said they’ll begin collaring the Little Sioux River and Echo Valley packs. As of this May, there were at least 13 wolves in the Echo Valley pack. There are at least six wolf packs around the Red Cliff reservation.

The collars will relay the location of wolves every 25 minutes versus once a week, which is how often the tribe has been obtaining data from the Wisconsin Department of Natural Resources. The DNR does weekly flyovers to obtain information on all collared wolves in the state.

"That will give us much finer scale data on the movements of those wolves," he said. "When we get clusters from those points, we can then go and investigate those clusters and find out if it’s a kill site, a den site, a rendezvous site."

St. Arnold said the information will be used to learn more about the packs’ prey and behavior over the life of the collars, which span two to three years. The Red Cliff biologist said they hope to better understand wolves moving through the reservation, timber harvests and the Apostle Islands National Lakeshore.

"Wolves are a very important species to the tribe. The tribe looks at the wolf as their brother," he said. "It’s just a very polarizing animal, and I like to — from my angle — to show people that wolves are actually going to help us rather than hinder us from anything."

Congressional lawmakers have been advocating for the de-listing of the gray wolf after the animal was placed back on the Endangered Species list in western Great Lakes states. Farmers and hunters have pushed for de-listing due to wolf attacks on livestock and hunting dogs. However, tribal and wolf advocates say the animal has not yet recovered to its historic range.

The state paid out around $200,500 in wolf damage compensation last year. The DNR has said management of the gray wolf should be returned to states. Figures from the DNR show the state's wolf population has grown to nearly 1,000.