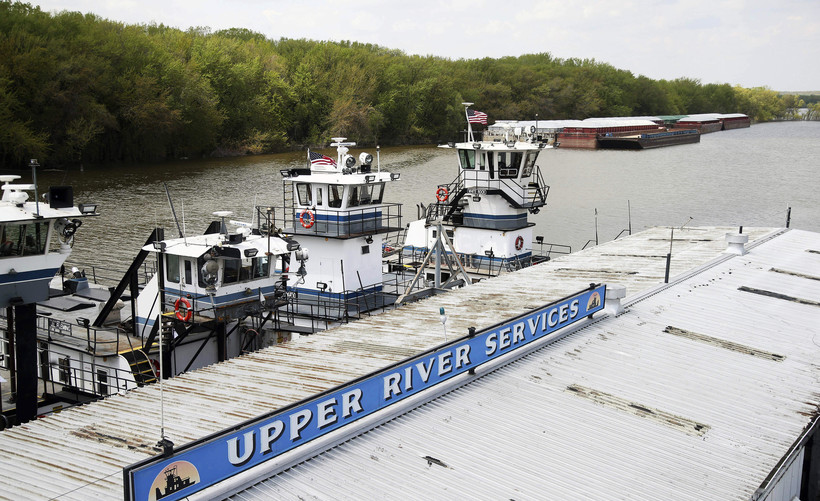 In this Tuesday, May 14, 2019 photo, empty barges, background right, are moored at the Upper River Services along with tug boats on the Mississippi River in St. Paul, Minn., as spring flooding interrupts shipments on the river. Historic Midwest flooding that began in March has left parts of the Mississippi River closed for business. Jim Mone/AP Photo

Shipping On The Mississippi River Should Pick Up Next Week

A shipping industry official says barge traffic on the upper Mississippi River could resume early next week if water levels continue to drop.

Three months of historic high water on the Mississippi River has started to recede, but the water’s impact on the shipping season will be felt all year, if not beyond.

"The entire Midwest region is really being affected by this," said Molly Isnardi, vice president of Upper River Services, the harbor operator in St. Paul, the northern-most port on the Mississippi River.

"That just shows the bottleneck on the river. We’ve got hundreds of barges waiting to get through this," Isnardi added.

The prolonged high water has shut down barge traffic on the Mississippi River and many of its tributaries including the Illinois, Ohio, Missouri and Arkansas Rivers.

"A lot of the locks that were closed they’re thinking (will open) by (June) 17 or 18," she said. "Once they (locks) start opening, barges will start moving, we think that will help some of the congestion."

Materials like road salt, coal, cement and fertilizer make their way north via barge and Isnardi said they're hoping to play catch-up in the remaining few months of the season.

"Once we miss those windows of opportunity like for the spring planting, we can’t make those up. People are still trying to look for storage for some of the fertilizers that were already loaded into barges," she said. "The companies that own those products have decided not to move it off into rail or truck."

One barge can hold materials that would fill 70 semi-trucks.

The biggest impact may be on upper Midwestern farmers who are unable to export grain from last fall’s harvest. So far, Isnardi said exports are "45 to 50 percent of what we normally see."

Marc Schultz, chair of the Joint Board of Harbor Commissioners in the City of La Crosse and La Crosse County, said the delays have also had an impact on communities with river ports like La Crosse.

"Essentially, it's a place for (materials shipped on barges) to get dispersed out of. Things like cement, pig iron, cottonseed, salt. It creates business in La Crosse," Schultz said. "What's going to happen is that all of the barge movements are going to be concentrated in a shorter period of time between now and freeze up next fall. Are there going to even be enough barges to carry things? Because it's a shorter period of time."

"Right now, we have a lot of places we have identified with our survey boats that will need some significant dredging. We have identified 12 to 14 places that we’ll need to address," said George Stringham, a Corps spokesperson.

That’s three times more places to dredge than in a normal spring.

The Corps recently took an unusual step of awarding an almost $5 million contract to help with additional dredging this spring.

"Right now, we’re just dredging the areas we have to in order to allow a few tows that are out there to get through. We’ve identified and prioritized all the other locations, so when the river does eventually start to fall out, we can hit those immediately," Stringham said.

A weather forecaster with the National Weather Service expects the upper Mississippi River to continue dropping for at least the next week or two.