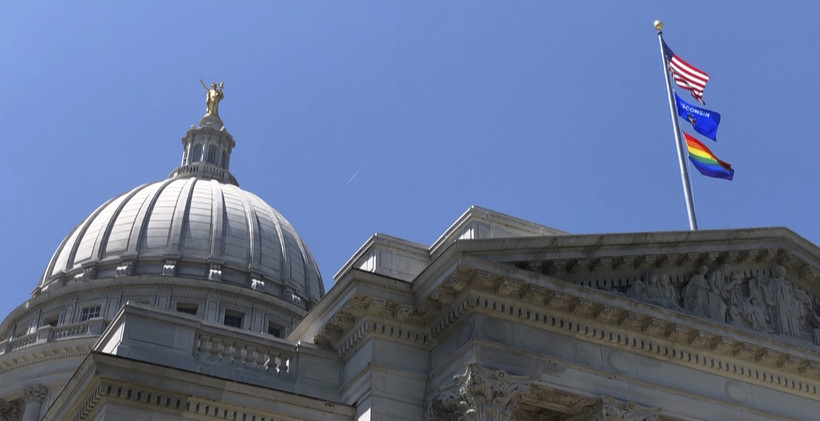 A rainbow flag observing Pride Month is displayed over the east wing of the Wisconsin State Capitol in Madison, Wis., Friday, June 7, 2019. The display, endorsed by Democratic Gov. Tony Evers, drew backlash from conservative Republican lawmakers who said it was divisive, while Democrats hailed it as a sign of inclusivity. Scott Bauer/AP Photo

The Human Rights Campaign Foundation, or HRC, report monitors the LGBTQ-related policies and practices of companies across the United States, assigning each participating company a score from zero to 100. This year's report marks the 20th anniversary of the first report.

The Racine-based Johnson Financial Group received a perfect score on the Index for the first time after receiving a 70 last year. Denise Domian serves as the head of human resources there.

"To go from a 70 to 100 is not without thought and efforts, and without really taking a deep look at your organization to see what is it that we need to do to be better and to really make everybody feel welcome and a part of the organization," Domian said.

Domian said opening up conversations in the workplace played a significant part in improving diversity.

"Being able to have an honest dialogue about things is the first step in better understanding, right, in feeling like we all can participate and be our best selves in the organization," Domian said. "A lot of it's just about how you treat people and what you're trying to achieve in the organization and recognizing that we all have work to do, and we all have biases, inherent biases in ourselves."

Domian said Johnson Financial Group is starting to turn its focus toward bringing the dialogue and support into the community. She said fostering diversity in an organization is an ongoing journey.

"Certainly we'd all like to have perfection, but I think we all realize that we're ... imperfect beings, and we just need to always strive and continue to look to see how we can be better," Domian said.

The Wisconsin LGBT Chamber of Commerce said in a press release, 36 of its members achieved a perfect score on the 2022 index, up from 27 last year. Chamber president and CEO Jason Rae said this year's total is a new record.

"By companies really building welcoming and inclusive workplaces, we're having a direct impact on people's own personal mental health, physical health and well being, but also in that company's health and really creating that culture where all people feel that they can thrive," Rae said. "We've really seen companies in the state step up to really lead the way."

Rae said he expects employers to take public stances against anti-LGBTQ and anti-trans legislation in Wisconsin and at the national level, though he ​said businesses shouldn't have to be the voices leading the way in those discussions.

"Our legislators in Madison should want to create that welcoming and inclusive environment, but they're not," said Rae. "It's important that the business community stand up and lend their voice to the discussion to say why these policies not only are bad for business, but are bad for the state, are bad for people in general."

This comes after a series of recent legislation in Wisconsin aimed at LGBTQ people, including a bill Republicans filed this week that would ban gender-affirming care for trans youth.

States that pass legislation affecting LGBTQ people in negative ways have experienced economic repercussions. An Associated Press analysis found a 2016 law in North Carolina requiring trans people to use bathrooms corresponding with the sex on their birth certificate would cost the state around $3.76 billion in business. Ultimately, the state rolled the policy back.

In an HRC video marking the release of the new Corporate Equity Index, HRC senior vice president of programs and training Jay Brown said the report's bar has been raised over the years.

"In the very beginning, it was very hard to get companies willing to sort of stand up boldly for LGBT+ inclusion," Brown said. "Today, we're in a really different place."

In the report release video, HRC Board of Directors member Karen Morgan said the report has raised awareness for corporations about the treatment of their employees and what can be done to make benefits and policies more inclusive.

"You have these companies providing protection and benefits for LGBTQ employees that might not be there, depending on where they actually live in this country," Morgan said.

"If a company has a score of 100, it's an indicator that they are well on their way on their journey toward inclusion and diversity as a company," Morgan said.

The Index will undergo significant changes for its 2023 report. The new criteria will increase minimum requirements for transgender-inclusive health care policies, require employee training on intersectionality, and require guidelines for gender transition in the workplace.