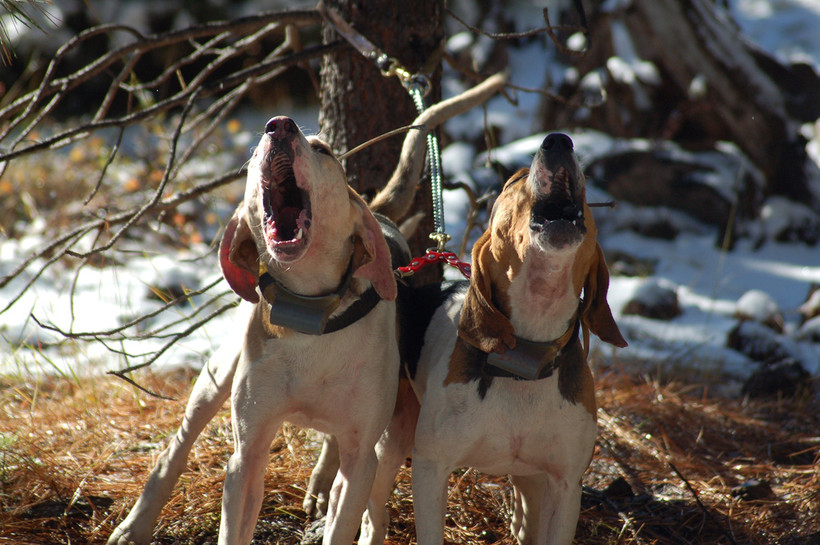 Record Number Of Hunting Dogs Killed By Wolves In 2016

Hound Depredations Last Year Were Nearly Double That Of Any Other
By Rich Kremer
Share:

Nearly twice as many hunting dogs were killed by wolves in Wisconsin in 2016 than any other year on record. Wolves killed 41 hounds used for hunting animals such as bears and coyotes last year. The closest year in comparison is 2014, when 23 hounds were killed.

Wisconsin Department of Natural Resources large carnivore specialist Dave MacFarland said state biologists aren't sure what is causing the spike. He estimates the number of bear hunters in the woods at any given time hasn't changed much and though the wolf population hit a record high of 952 animals last year, he said pack growth rates don't correlate with the sudden spike in hound deaths.

McFarland said he'll be looking at this year's numbers to see if a trend is developing.

"We don't really know the cause, but we are monitoring it and will continue to look at these conflicts through time to determine whether or not this is a new point and we'll continue to see deaths at that level," said MacFarland.

Most of the hounds killed were in far northern Wisconsin with others in Clark, Langlade and Oconto counties. No hunting dogs have been killed by wolves this yeark, but most interactions happen between July and September.

A wolf hunting season was created by Republican lawmakers in 2012, soon after the gray wolf was taken off the federal endangered species list. Supporters said the hunt was a way to control the wolf population and decrease depredations of hunting dogs and livestock.

The season was controversial partially because the Wisconsin law creating it allowed the use of dogs to track and drive wolves within shooting range of hunters. Animal rights and pro-wolf groups attempted to stop the use of dogs in court saying the tactic was inhumane, but were unsuccessful.

A 2014 court decision placed the wolves back on the endangered species list, causing hunting groups and a growing number of state and federal lawmakers to call on Congress to pass legislation to de-list the wolves once again so states can manage their population.

A bill to do that was introduced earlier this year by Wisconsin's U.S. senators in a rare moment of bipartisan agreement. Republican Se. Ron Johnson and Democratic Sen. Tammy Baldwin's legislation would remove protections for the gray wolf in Wisconsin, Minnesota, Michigan and Wyoming under the federal Endangered Species Act.