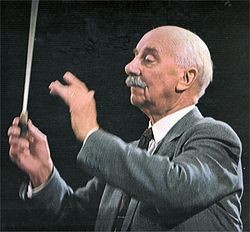 The new decade called for a new technology. So in 1920 Adrian Boult agreed for the first time to conduct a performance for a gramophone record. Boult had been signed by the American manager of His Master’s Voice, who had liked Boult’s performance at the Russian Ballet and asked him to repeat some of the program “for the record.”

Boult was to conduct the British Symphony Orchestra in recordings of A Shropshire Lad by George Butterworth and two ballet suites–The Good Humoured Ladies, based on music by Domenico Scarlatti, and Ottorino Respighi’s reworking of Rossini pieces called La Boutique Fantasque.

When Boult and the orchestra arrived at the recording studio they beheld a room “so small that it would barely have held a billiard table,” let alone the necessary music stands and the huge gramophone horn.

The orchestra placement was not exactly what the musicians were used to. The concertmaster sat in front of the orchestra “with his fiddle so nearly inside the mouth of the horn as he could hold it.” A few string players sat on either side of him, but apparently the gramophone horn wasn’t good at picking up the low tones of the double bass and so the double bassist was replaced by a tuba player who “puffed away in the furthest corner of the room with remarkable results.”

Not long after those first sessions, Boult was conducting a recording of a work by Arthur Bliss. At the end of the performance the impulsive composer shouted, “By Jove, you fellows, that was grand!” Which went right into the hot wax along with the music. Boult was unable to convince the manager that the composer’s enthusiastic endorsement would be good for record sales, and so the entire performance had to be re-done.

Despite the early difficulties, Adrian Boult continued to make records for another fifty-nine years.