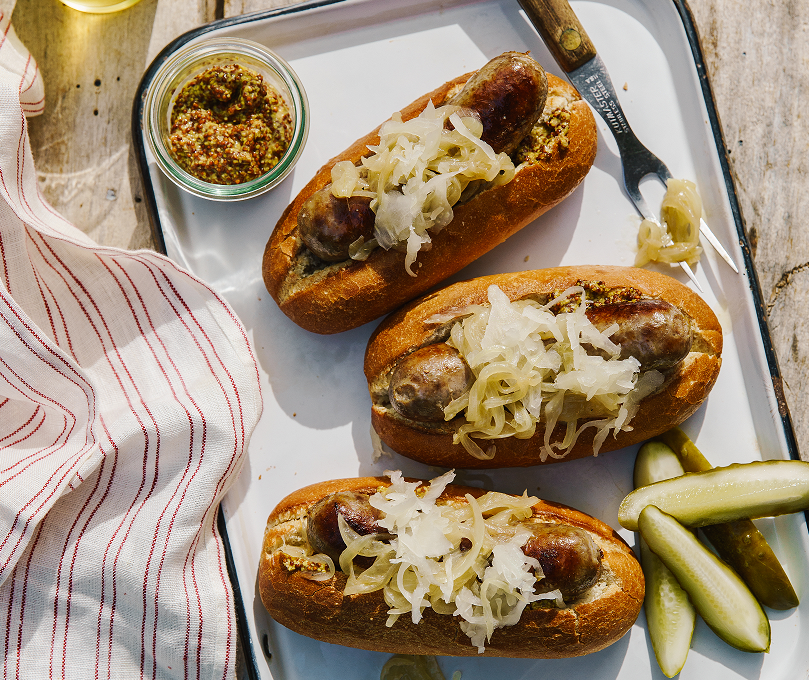 Excerpted from The Lake Michigan Cottage Cookbook by © Amelia Levin. Photography by © Johnny Autry. Used with permission of Storey Publishing.

Excerpted from The Lake Michigan Cottage Cookbook © by Amelia Levin. Used with permission from Storey Publishing.

Bratwursts in Wisconsin are so much more than just German sausages. Aside from cheese, they’re the signature food of the state, and people have strong beliefs about how they should be prepared. For this recipe, I tried a combination of both braising in beer and grilling. If you’re feeling ambitious, try making the brats yourself.

1. To cook on a grill: Prepare a gas or charcoal grill for medium-heat grilling. Place the beer, butter, and onions in a heavy-duty foil pan, set on the grill grate, and bring to a simmer. Nestle in the bratwurst and simmer, covered, until the onions are tender and the bratwurst reaches 160°F (71°C), about 15 minutes. Remove the bratwurst from the pan.

2. Grill the bratwurst on the grill grate until browned on both sides, turning once, about 4 minutes. Grill the buns during the last 1 to 2 minutes to toast them lightly.

3. To cook on the stovetop: Melt the butter in a large skillet over medium heat. Add the onions and cook until just caramelized, about 10 minutes. Pour in the beer and bring to a simmer. Nestle in the bratwurst, cover, and continue to simmer until the bratwurst reaches 160°F (71°C). Remove the bratwurst. Increase the heat to high and simmer the beer and onions until most of the liquid is absorbed and the sauce has a syrupy consistency, about 5 minutes longer. Finish bratwurst by grilling them on an outdoor grill or cast iron grill pan over medium heat until browned, turning once, about 4 minutes. Toast the buns lightly, either under the broiler or in a ridged stovetop grill pan.

4. To serve, spread the buns lightly with mustard. Place the bratwurst in the buns, and top with the onions and the sauerkraut, if desired. If not serving right away, return the grilled bratwurst to the pan with the beer to keep warm.