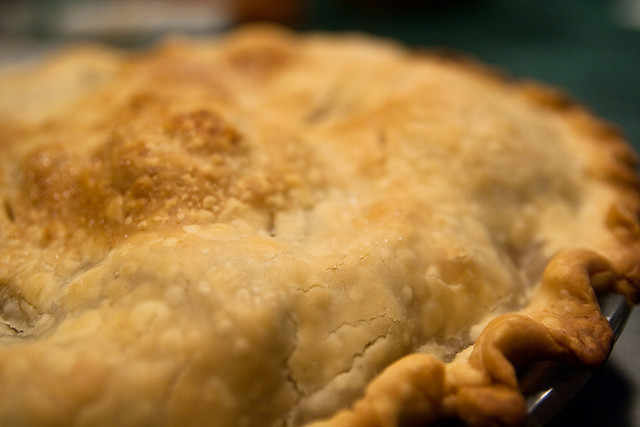 In pursuit of “perfect” piecrust, some recipes advocate for this secret ingredient or that. Vinegar, maybe (which slows down gluten formation), an egg (which adds protein to the dough, binding it together and making it easier to roll), or even vodka (which evaporates during baking without having developed wheat flour’s gluten). These additives are especially useful when you’re making piecrust in a food processor, which can work the hell out of the crust with one pulse too many.

But they aren’t necessary. Not when you’re making dough by hand. With my method, this all-butter crust recipe creates a dough that’s as tender as it is flaky, which means it’s not going to explode into shards like a puff pastry when you take a bite. Rather, it will frame the filling in rich, light pastry layers that are strong enough for you to pick up a slice and eat it by hand.

This crust is so easy to work with, its ingredients so easy to find and store, I use it in all my pie classes. When making pie for myself, it’s the recipe I lean on like an old friend.

*(c)2014 By Kate Lebo. All rights reserved. Excerpted from Pie School: Lessons in Fruit, Flour, and Butter by permission of Sasquatch Books.