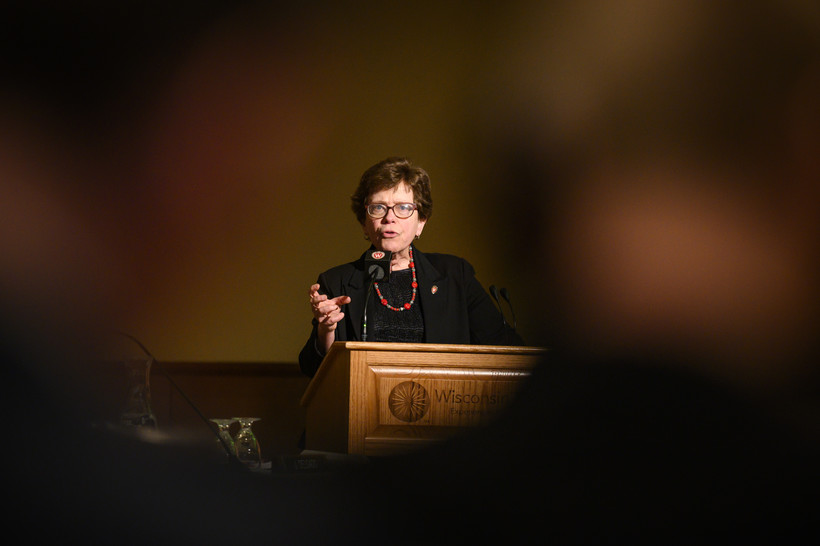 UW-Madison Chancellor Rebecca Blank speaks during to the UW System Board of Regents in Madison in February 2020. Bryce Richter/UW-Madison

Blank will end her tenure at UW-Madison in May to become Northwestern's first female president
By Rich Kremer
Share:

The second-longest serving chancellor at the University of Wisconsin-Madison will step down in May next year to become the first female president of Illinois' Northwestern University.

Blank is no stranger to Northwestern University. In 1989, she became the one of the first women to be granted tenure in the campus' economics department.

In the following years, Blank became a well known economist focusing on poverty and the low-income labor market. She served as an economics expert in three presidential administrations, according to a press release from Northwestern University.

UW-Madison's release credits Blank for overseeing an increase in the campus' six-year graduation rate, which is now at 89 percent, and a decrease in graduation gaps between white students and students of color.

UW-Madison's enrollment has grown in recent years while some other UW campuses have seen enrollment declines. This fall, the campus announced its largest freshman class on record.

Blank also oversaw the creation of the Bucky's Tuition Promise and Badger Promise programs, which provide free tuition and fees for students from families with an adjusted gross income of $60,000 or less.

During an interview with reporters, organized by Northwestern University, Blank said the tuition promise is among her proudest accomplishment during her time at UW-Madison.

"And that's helped us bring in a growing number of first generation students, students of color and students from lower-income families in the northern part of the state," said Blank.

When she came to campus in 2013, said Blank, UW-Madison was in "real financial trouble." She said it became apparent that waiting for a state funding increase from state lawmakers was not going to happen, so she worked with administrators to increase private investments into the university.

Blank said one of her greatest frustrations was the inability to convince state lawmakers to allow UW-Madison and other state campuses to borrow money for new buildings or financial emergencies.

"We are the only university in the country that does not have a Moody's bond rating and are not able to borrow," said Blank. "And this past year, in a pandemic, when we had a huge decline in revenues and we knew the pandemic was over, that would come back, what did every other university do? They borrowed and will pay back in the future, and we weren't able to do that in the same way."

Blank said the lack of borrowing authority is "really destructive" for a first-rate institution like UW-Madison.

Despite the challenges brought by the COVID-19 pandemic, Blank said the hardest part of her time leading the state's flagship university was when Republican lawmakers eliminated tenure protections for college professors and cut state funding for UW schools by $250 million in the 2015-2017 state budget. Blank said the UW Board of Regents worked quickly to create a tenure policy similar, but it was a tumultuous time for public higher education.

"I had more than 10 percent of my faculty with outside offers the next year," said Blank.

In a statement emailed to WPR, UW-Madison's student government association, the Associated Students of Madison, congratulated Blank on her new position with Northwestern University and said the organization is "greately appreciative for her nine years of dedicated service to UW-Madison students and the state of Wisconsin."

"The Chancellor has been with us in some of the most trying times in recent UW–Madison
history," said the statement. "Despite a global pandemic and challenges from the State Legislature, she led a historic expansion of the Bucky’s Tuition Promise program and promoted inclusion education by ensuring all new students attend Our Wisconsin."

The student group said it is committed to working with Blank for the rest of the school year to ensure the university is committed to student inclusion in the search for a new chancellor.

"Regardless of who the next chancellor is, we hope they will share our goals of promoting student voices and making campus an equitable and inclusive environment," said the statement.

UW Board of Regents President Edmund Manydeeds hailed Blank's commitment to the Wisconsin Idea, which aims to expand the university's impact across the entire state.

"The impact of her leadership has been felt throughout the UW System and entire state, and she will be sorely missed," said Manydeeds. "I appreciate that she will continue as chancellor through this academic year as we prepare for a transition and know she will continue her record of excellence at Northwestern."

In a statement, Gov. Tony Evers lauded Blank as a "distinguished leader and economist" who has advocated for UW-Madison, "especially in the midst of political headwinds and budget cuts during her time at the UW."

"As we work to ensure our state’s continued economic recovery, supporting higher education and our UW System—including our campus in Madison—must be a top priority," said Evers. "I am confident the UW Board of Regents, in consultation with faculty, staff, and students, will select a chancellor who will be a strong voice for investing in our kids, continuing UW-Madison’s legacy as a top-tier research institution, and the pursuit of the Wisconsin Idea.”

Editor's note: This story has been updated to reflect that Chancellor Rebecca Blank is one of the first women to be granted tenure in Northwestern's economics department. Wisconsin Public Radio is a service of the University of Wisconsin-Madison and the Wisconsin Educational Communications Board.