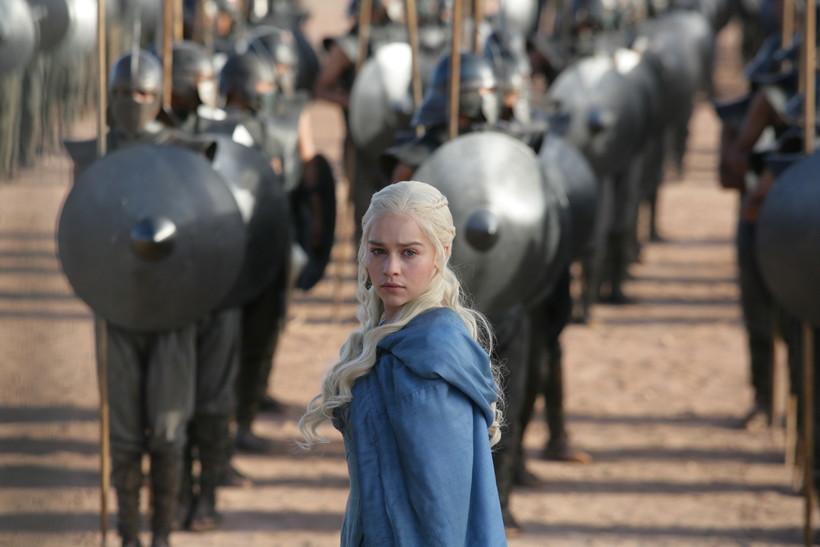 This image released by HBO shows Emilia Clarke in a scene from "Game of Thrones." The final season premieres on Sunday. HBO via AP

The Rare Cultural Dominance Of 'Game Of Thrones'

As HBO's hit series "Game Of Thrones" returns for its eighth and final season, the pop culture world is buzzing with an anticipation rarely seen.

When AMC's "Breaking Bad" aired its final episodes in 2013, it was big news. The final scene of "The Sopranos" still causes debate and consternation around the water cooler for fans of the show.

But "Game Of Thrones" seems to have taken it to another level. Fans have waited two years for the show's final six episodes, several of which will approach 90 minutes in length. The anticipation is palpable.

Joanna Robinson writes about the show for Vanity Fair and hosts the "A Storm Of Spoilers" podcast. She's gearing up for what is sure to be an epic finale. On a scale of 1 to 10, she says her excitement is at a nine.

"Let's like save one number, just in case," she joked.

In the lead-up to the April 14 premiere, the show's star actors have been near-nightly fixtures on "The Late Show with Stephen Colbert," "The Tonight Show Starring Jimmy Fallon" and "Satruday Night Live." Excitement for "Game Of Thrones" is everywhere.

The internet exploded with chatter at the beginning of March when HBO released the official trailer for Season 8. Every frame was scrutinized for clues about plot and the fates of favorite characters, with The Ringer devoting an entire hour to a video breakdown of the two minute teaser.

During Season 7, HBO averaged 10 million official viewers per episode, with scores more watching illegally online across the world. But the show seems niche at first glance. Based on the "A Song Of Ice And Fire" series by George R.R. Martin, it's set in a medieval fantasy world and features dragons, dark magic and zombies.

So how has this show, which is available behind HBO's subscription pay wall, captured the hearts and imaginations of such a huge mainstream audience?

She said an example is Season 3's infamous "Red Wedding." Fans reacted to the end of that episode with shock. Videos of those reactions went viral on YouTube. "People started to perk up and pay attention," Robinson said.

"They were like, 'What is this show that is causing people to scream and cry in their living rooms? And maybe I wanna watch it too,'" Robinson said.

Robinson thinks it's that human connection to the characters that forms the core of the show, not the dragons and zombies.

So with such passionate fans, and the internet sagging beneath the weight of theories about the show's conclusion, how can "Game Of Thrones" possibly stick the landing?

"I think what I really admire about the people who work on this show is they've said they're not going to let that stop them from swinging for the fences," Robinson said.

"I'm excited for the ending to anger some people, because then we're gonna have this big conversation about it, and that's gonna be really fun," she added.

HBO teases, "From the horrifying secrets of Westeros’ history to the true origin of the White Walkers, the mysteries of the East to the Starks of legend, only one thing is for sure: It’s not the story we think we know."

But will future "Game Of Thrones"-related content — or anything for that matter — be able to catch lightning in a bottle and become a piece of monoculture in the same way?

Given that "Game Of Thrones" releases its episodes weekly, whereas streaming services like Netflix and Amazon like to release their shows using the "binge" model — letting you watch entire seasons of shows at your own pace — Robinson doubts it.

"More than even that story going away is that moment going away in our culture," she said. "There won't be that one show we're all watching together week by week, having these slightly slower conversations about it."