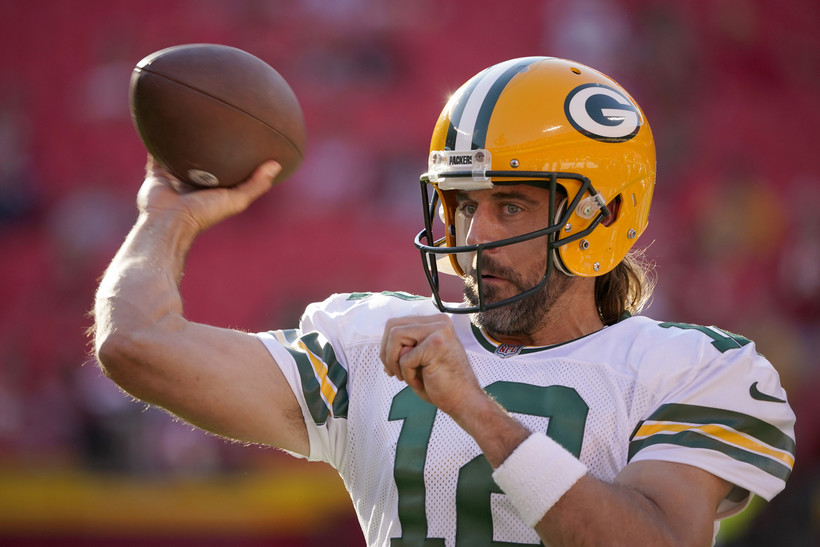 Green Bay Packers quarterback Aaron Rodgers warms up before the start of an NFL preseason football game between the Kansas City Chiefs and the Green Bay Packers, Thursday, Aug. 25, 2022, in Kansas City, Mo. The Packers’ chances of continuing that uncanny level of success will depend on how fast reigning MVP quarterback Aaron Rodgers develops chemistry with his new group of receivers. Ed Zurga/AP Photo

Allen Lazard, Robert Tonyan questionable ahead of Sunday's game due to injuries
By Jenny Peek
Share:

The Green Bay Packers will take on one of their biggest rivals Sunday when they travel to Minnesota to face the Vikings in their first game of the NFL season.

Going into the game, the Packers have the No. 4 rated defense in the league — a big improvement in an area they've struggled with in the past. What remains more of a question is who quarterback Aaron Rodgers' main target will be.

Wide receiver Allen Lazard is out with an ankle injury, and hasn't practiced all week. His status is questionable for Sunday's game. Tight end Robert Tonyan is also questionable as he recovers from a torn ACL. Both were regular targets last season and were expected to fill a major chasm left by Davante Adams' trade to the Las Vegas Raiders in March.

That leaves veteran receiver Randall Cobb, rookies Romeo Doubs and Christian Watson, and Sammy Watkins, who spent last year with the Baltimore Ravens. They are all likely to get some action against the Vikings. It also means running backs Aaron Jones and AJ Dillon could be a focus Sunday as the Packers work to move the ball down the field.

Without a clear target for Rodgers, Packers Head Coach Matt LaFleur told reporters Thursday the team has prepared for just about everything during the offseason.

"I would like to think that the stuff that we give our players has answers for the majority of the things that you're gonna see out there," he said. "But, you know, week one is always a crapshoot."

"Ultimately, there's going to be mistakes made whether you're a rookie or whether you're in your 15th year," he continued. "That's just the nature of the beast. And I think the key is, how resilient are you? ... How do you just take it one play at a time?"

Looking toward the season as a whole, LaFleur said mistakes during third down and in the red zone hurt the team the most last year.

The Packers went 13-4 last season and won the NFC North. But their season ended when they lost to the San Francisco 49ers in the NFC Championship game 13-10, dashing hopes for a Superbowl appearance.