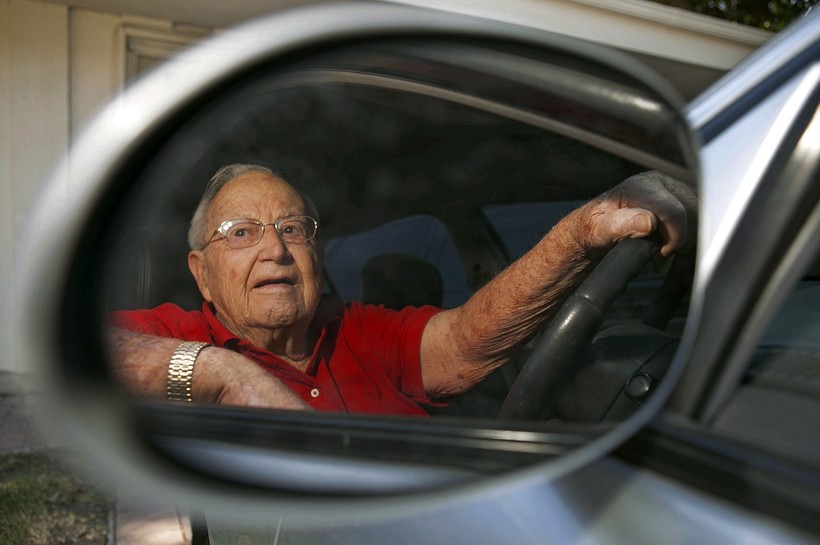 Jack Wyrad, 92, is seen reflected on his side mirrors as he adjusts them before driving his GM Buick in Los Angeles Thursday, Aug. 30, 2012. Wyard, who got a perfect score on his written test for his license two years ago, says he believes older people should make their own decisions on when to quit driving. Damian Dovarganes/AP Photo

A Quarter Of Fatal Crashes In State Involve Elderly Drivers

A national transportation research group says Wisconsin has the highest rate in the country for fatal crashes involving elderly drivers. Twenty-six percent of fatal crashes in 2016 involved someone 65 years or older, even though Wisconsin has a lower percentage of older drivers than many other states, according to a study conducted by a national transportation research group named TRIP.

"A lot of Americans 65 and over are very active, they’re leading very mobile lives, and it’s critical they maintain that as long as they can safely do so. But what we recognize at the same is a significant increase in the number of traffic fatalities that are occurring," said Frank "Rocky" Moretti, TRIP director of policy and research.

"It’s kind of an alarming statistic," said David Pabst, safety director for the Wisconsin Department of Transportation. "But it doesn’t mean that in every one of those crashes someone over 65 died, just that they were involved. It’s a serious problem either way."

But it’s not that older motorists are bad drivers. People between the age of 65 to 70, Pabst says, generally have good driving skills and few accidents. They also travel fewer miles.

"Generally older drivers tend to wear their seat belt; they don’t speed; they don’t drink and drive. And so the biggest (factor) for them being in a crash is just surviving," said Pabst.

Elderly drivers are more likely to have serious or fatal injuries in a crash because their health is more fragile. Pabst says people should decide whether or not to continue driving based on their vision, muscle dexterity, reaction time and any medical conditions.

"We need to encourage people to get cars that work for them as they age," said Pabst.

Almost a quarter of Wisconsin’s population is projected to be 65 or older by 2040.

"It is important we consider this demographic shift and its impact on safety and mobility," said Mark O'Connell, executive director of the Wisconsin Counties Association. "This means more user-friendly roads for those able to drive and public transportation or shared-ride services for those who cannot, or choose not to drive themselves."

The TRIP report has several recommendations including more use of public transit and other transportation options, including self-driving cars.

To make roads safer, the report says signage lettering should be bigger and brighter, particularly at intersections. Merge lanes should be longer and there should be education and training programs for older drivers. Pabst said they held one in 2015 and it was well attended.