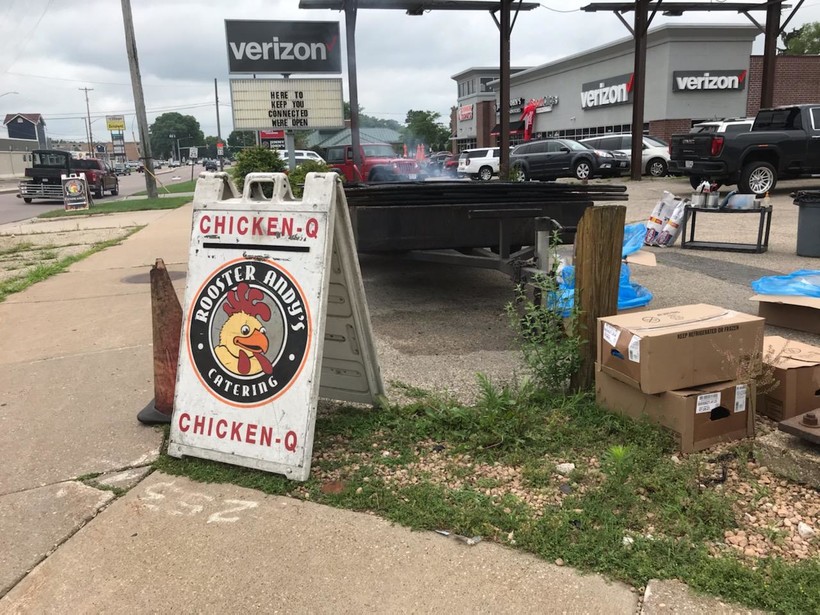 In this photo taken in July 2021 in La Crosse, Wis., a typical set up advertising a Chicken Q event can be seen. It's the scent of grilled chicken that helps bring customers in. John Davis/WPR

A Q For You: Where Does The Name 'Chicken Q' Come From?

Marilee Cronin grew up near La Crosse, and she always wondered what the origin of the Chicken Q was. So she asked WPR's WHYsconsin that very question.

A Chicken Q is a name for a charcoal chicken dinner sold as part of a fundraiser. But the name is really only known regionally in the La Crosse area — places like Tomah, Black River Falls and Prairie du Chien. They are also popular among nonprofit groups like fire departments in Trempealeau County, north of La Crosse.

Rooster Andy’s Catering has a routine schedule of Chicken Q events, many in the warmer months. But on this warm summer day in July, the custom charcoal grill is blowing smoke at a busy La Crosse intersection, raising money to benefit a school basketball program.

This particular day's Chicken Q meal includes a charcoal-grilled, half-chicken dinner complete with beans, potato salad and a roll. For a little extra money, people can get corn-on-the-cob. 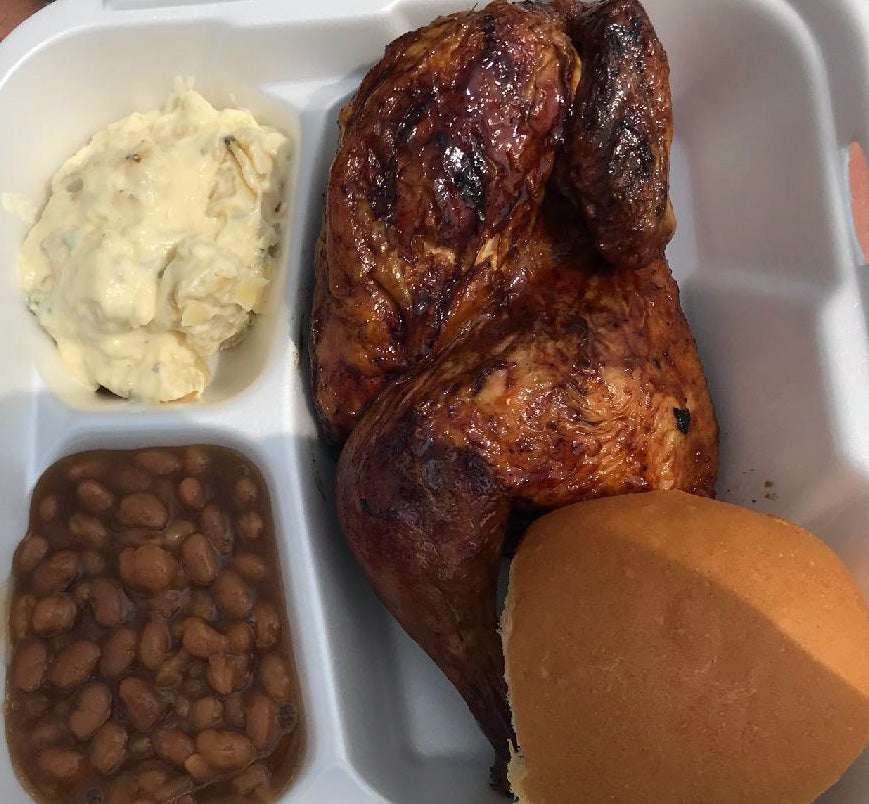 Dan Parisey, of La Crosse, waited in line for his order. He gets Chicken Qs a couple of times a month. He likes the convenience of not having to cook and the taste of grilled chicken, but he has no idea how the Chicken Q got its name.

"I just assumed barbecued chicken. I don't know. I have no idea where it came up. I have no clue," he said.

Even the professionals are unsure of who coined the phrase, but they do know few people outside the region know what a Chicken Q is.

Three catering companies run Chicken Q events in the city of La Crosse, and they just have theories about where the name comes from. Andy Falconer, Rooster Andy's grill master, said if you drive much outside La Crosse, no one has even heard of the Chicken Q.

"Even as close as Rochester, most people just aren't aware of what a Chicken Q is," he said of the city in Minnesota, located about an hour west of La Crosse. 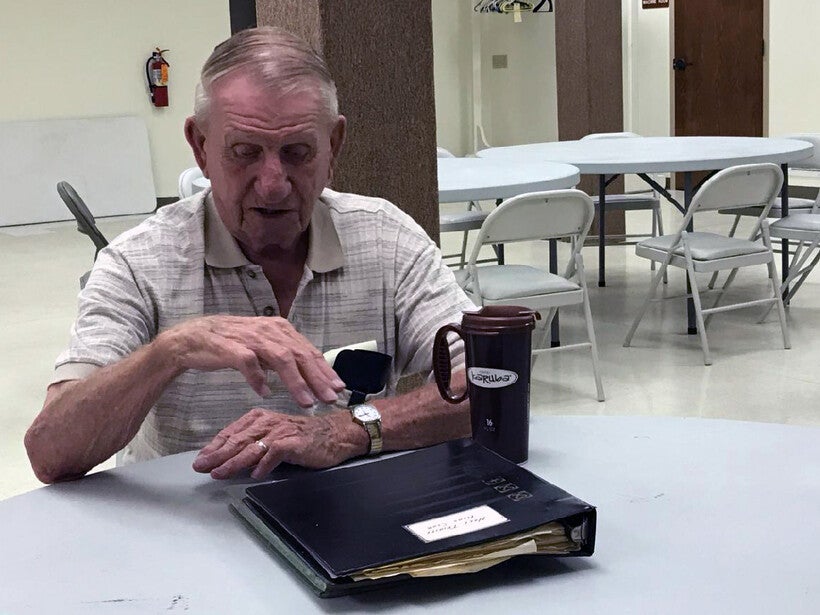 Gene Jirsa organized Holy Trinity Catholic Church's first Chicken Q in 1970. His theory of how the name came to be is as solid as anyone's.

"E.R. Schultz was a beer distributor, and he had his employees who would work at these Chicken Qs when they started getting into them," Jirsa said. "All they did was drive for him and deliver beer. They would work part-time on the weekend. When they were off, they’d have some Chicken Qs that he got going," Jirsa said. "He was the pioneer of the Chicken (Q)."

E.R. Schultz, or Elmer, was a beer distributor in La Crosse after Prohibition. Newspaper ads from the 1930s and '40s said he stocked brands like Blatz and Kingsbury. A Facebook post on a La Crosse history page says Schultz's brother, Art, ran Arcadia Fryers in Trempealeau County. Arcadia Fryers was the longtime name of a chicken farmer's cooperative started in the 1920s that still exists today under the name Pilgrim's. Jirsa said Holy Trinity used to get the chicken it served from Elmer, who was also an Arcadia Fryers' distributor.

The oldest living relative to E.R. and Art is their sister-in-law Nancy Schultz, who still lives in Trempealeau County. At 93, and still sharp as a tack, she can't remember ever hearing a family story about E.R. or Art being the source of the name Chicken Q.

The concept of a chicken dinner fundraiser isn't unique to La Crosse, but the name Chicken Q is. There are thousands of references to Chicken Qs in old files from the La Crosse Tribune but no accounts explaining where or how the name started. One of the earliest accounts is from 1959, which promotes a Chicken Q being hosted by the YWCA.

In the 1970s, Holy Trinity Catholic Church used to sell more than 3,000 chicken dinners twice a year to benefit the church and the Boy Scouts. While the church still does two fundraisers each year to help the church meet financial needs, they are about half in sales of what they once were.

Chicken Qs remain popular with some nonprofits still organizing them on their own, but a cottage industry started in the 1980s when professional caterers began arranging Chicken Qs with proceeds going to nonprofits. 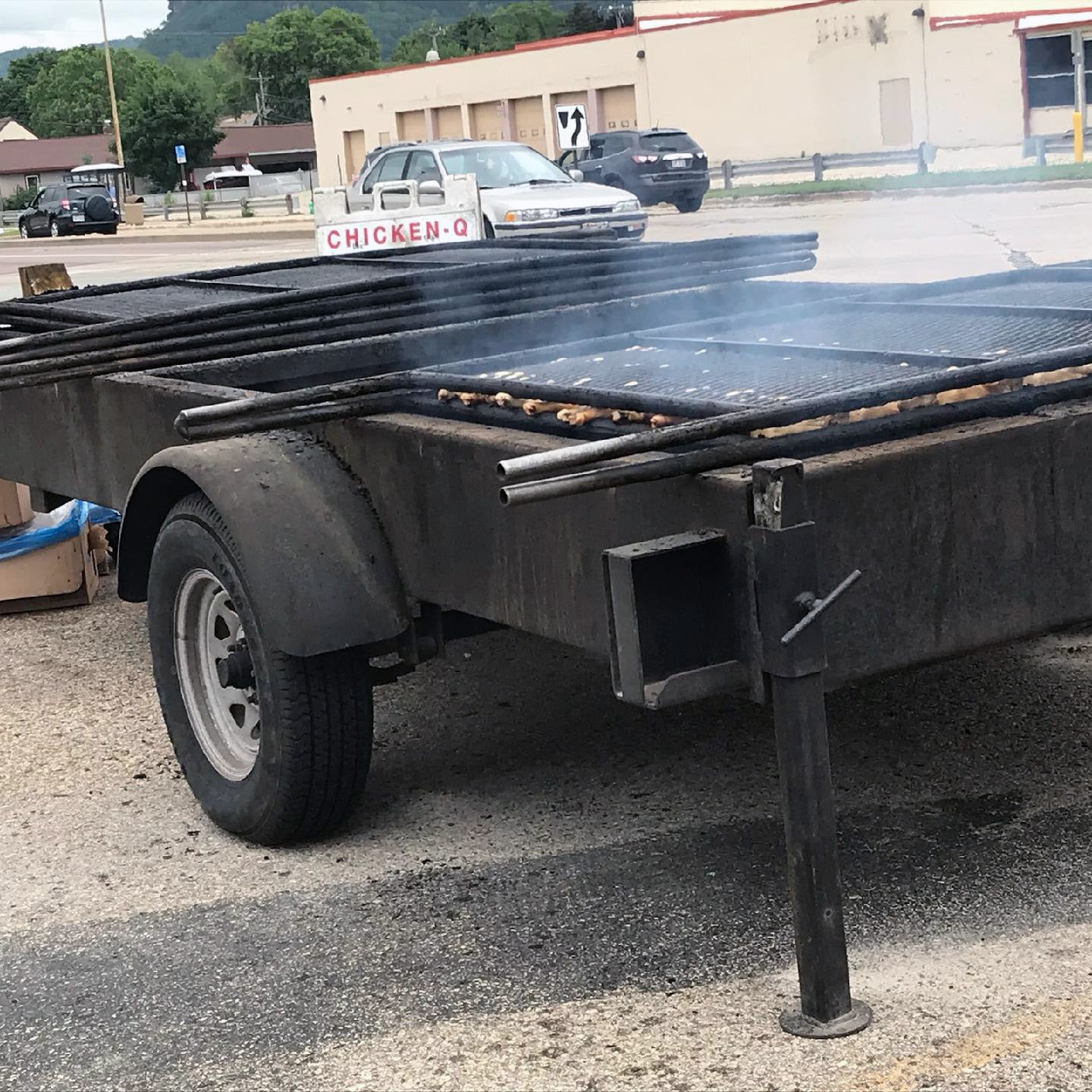 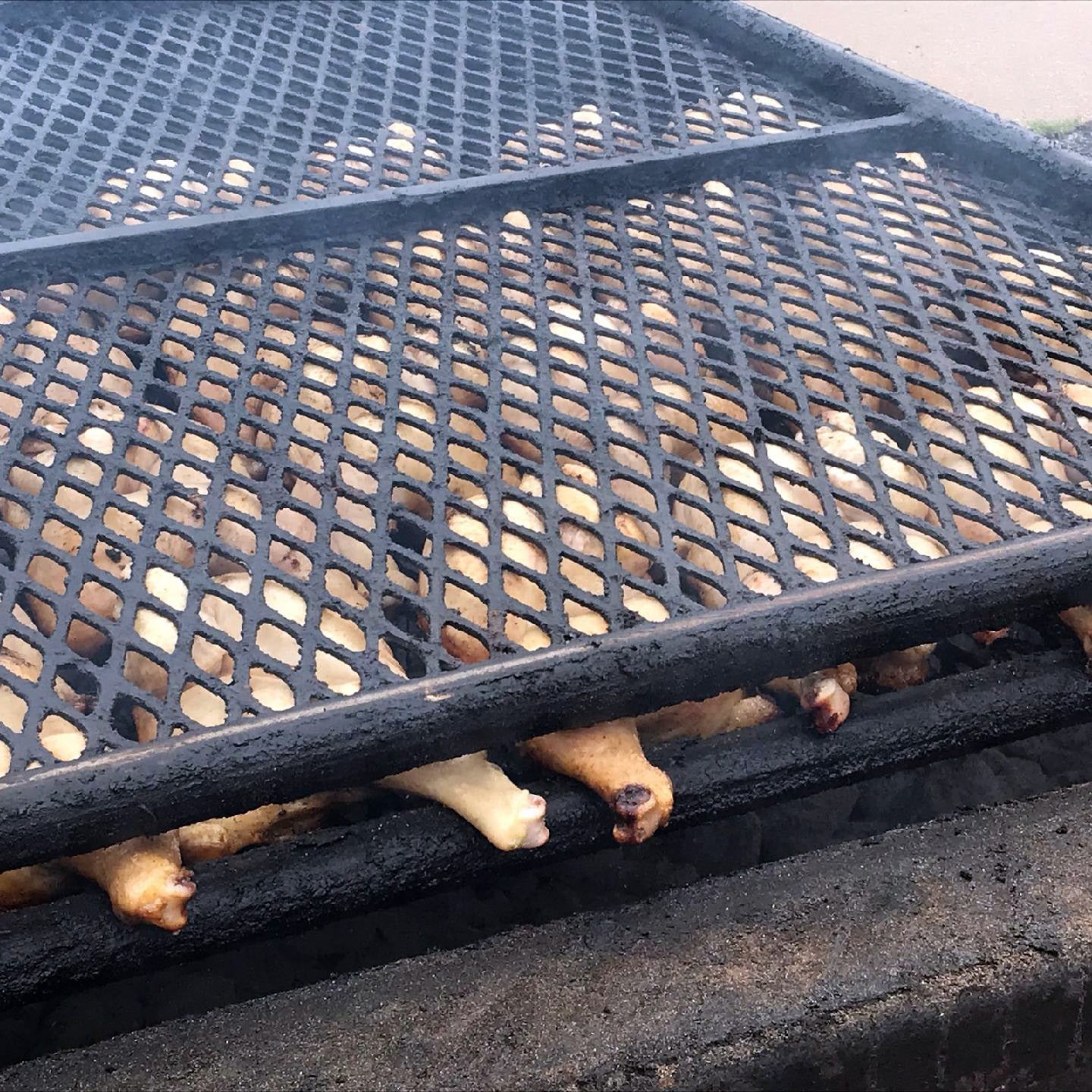 While there is no evidence the Schultz brothers are behind the name Chicken Q and limited anecdotal evidence E.R. was behind the concept, there is an interesting story about what has become of Chicken Qs since the mid-1980s. And the story of how the Chicken Q has evolved is consistent.

They were partners but split up in a year or two. Franz built pits to charcoal chicken, and shortly after that started doing his own Chicken Qs, said Pogy’s owner Josh Pogreba, Clarence’s nephew.

"I believe Bud Pretasky and son Andy ended up buying Franzie out, and (in) the mid- to late-'80s, Rooster Andy’s was started," said Josh.

That matches up closely with the timeline from Falconer, the Rooster Andy's grill master.

"Originally, Pogy and Franzie partnered up for one year to do Chicken Qs," Falconer said. "They decided they were better off going their separate ways. Franzie partnered with Bud Pretasky, and they started what would become Rooster Andy’s Catering. We’ve been going since."

An employee of Rooster Andy’s started Premier Catering a few years ago, so now three catering companies are available to help nonprofits raise money by hosting a Chicken Q.

And while most Chicken Qs may not be as large as they used to be, they remain a popular way for nonprofits in the La Crosse area to raise money.

"It’s all about making money for the organization that you’re raising money for," said Josh. "The people who are beating the streets selling tickets and helping serve meals and making (food) up that day make a successful Chicken Q. As far as good chicken that people like to eat, I think consistency helps, having the same people cook it."

Every Chicken Q, whether run by professionals or nonprofit groups, also has a secret recipe for a liquid to baste the chicken with to keep it moist. Most recipes include beer, butter and assorted spices.