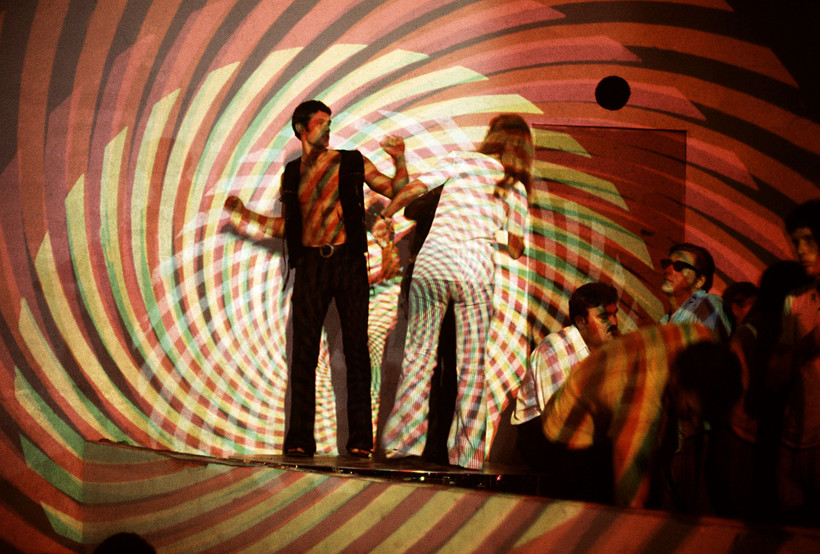 A young couple dance under a psychedelic light show at "The Electric Circus" nightclub on St. Marks Place in the East Village in New York, Nov. 13, 1967. The "Electric Circus" embodied the wild and creative side of 1960s club culture.

Psychedelics: The Next Revolution In Psychiatry?

Psychologist Bill Richards said the first time he had a psychedelic experience he was a graduate student at the University of Gottingen in west Germany. It was 1963 and, as a young theology student, he had volunteered for a psilocybin experiment at a nearby psychiatric clinic. He had no idea what he was getting into.

"I lay back and my consciousness expanded to this exquisitely beautiful, abstract panorama of colorful designs and patterns," he said. "It felt like I became the energy flowing through those patterns. All of a sudden, there was this mystical consciousness, feeling as though I was outside of history, looking back at a world of time with an incredible sense of profundity and beauty and stark reality."

That experience changed his life, he said. Richards went on for a Ph.D. in clinical psychology and continued to study psychedelics.

"Not only was it legal. It wasn’t even controversial," he said. "It was part of academia."

In fact, researchers themselves routinely ingested LSD and other psychedelics to know firsthand how it felt. The science of psychedelics flourished. Tens of thousands of people participated in more than a thousand scientific studies. And that early research showed remarkable promise for treating addiction, trauma and mental disorders.

Then psychedelics got sucked into the culture wars of the 1960s. Ex-Harvard professor Timothy Leary emerged as the apostle of LSD, imploring people to "turn on, tune in, drop out." A crackdown followed and President Richard Nixon launched the war on drugs.

Psychedelics were soon classified as schedule 1 drugs, making their legal use virtually impossible even for medical researchers. And for decades, psychedelics were the forgotten wonder drugs.

In 2006, Stephen Ross, an addiction psychiatrist at New York University, stumbled on a commemorative event marking the 50th anniversary of LSD’s discovery. When he asked his supervisor why anyone would bother to remember this anniversary, he learned psychedelics were once a mainstay of psychiatric research.

"I’d never heard about any of that in my medical training or psychiatric training," Ross said. "So I started to look at the old literature — hidden in plain sight, psychedelics had been a big part of psychiatry for close to a quarter of a century."

Today, psychedelics are making a comeback in a handful of research labs around the country. They follow strict protocols and must be approved by their universities.

Ross runs one of those labs at NYU, where he’s studying the therapeutic use of psychedelics for alcohol addiction and end-of-life anxiety for cancer patients. He’s still fascinated by the spiritual quality of these mind-bending trips.

In Richards' book, "Sacred Knowledge: Psychedelics and Religious Experiences," he examines different kinds of psychedelic experiences, which can range from dazzling light shows to visions of symbolic archetypes and then to full-blown mystical experiences.

Some studies suggest that an overwhelming mystical experience, with feelings of universal love and cosmic oneness, may be crucial to the psychedelics’ power to heal. Patients who report mystical experiences typically have better results when it comes to treating their anxiety and addictions.

"There’s a sense that within, there are resources of strength and courage and wisdom that you thought were never there," Richards said, "Especially if you’ve been an alcoholic or narcotic addict."

A key component of this new psychedelic research? A clinical setting staffed with highly trained guides, like Katherine MacLean.

A former guide at Johns Hopkins, MacLean now runs the Psychedelic Education and Continuing Care Program. And she said no matter how careful you are, you can never completely remove the possibility that these experiences will be overwhelming — that you feel like you’re going crazy or even dying. Still, that intensity might be what can make these experiences so transformative.

"I really worry about making the psychedelic experience medical and sanitized and the same cookie-cutter thing for everybody," MacLean said. "I don’t think we should take all of the appearance of risk away."

While she prefers the controlled clinical setting, she has also provided counseling at concerts and other underground scenes. Plenty of people still take psychedelics illegally, either as a means of self-medication or simply to have a mind-blowing trip.

The legal use of psychedelics is still highly restricted, but researchers hope the FDA will reclassify these drugs to make them more accessible for therapeutic use.

"I think psychiatry is going to look a lot different in five to 10 years," said NYU’s Ross.

Ross sees three models starting to emerge for difficult-to-treat disorders: "One is the use of ketamine for depression. Ketamine is a big breakthrough in psychopharmacology — the first agent in 50 years that works rapidly. Then you have psilocybin for cancer and depression. And then you have MDMA for PTSD. I think these three paradigms are the future of psychiatry."