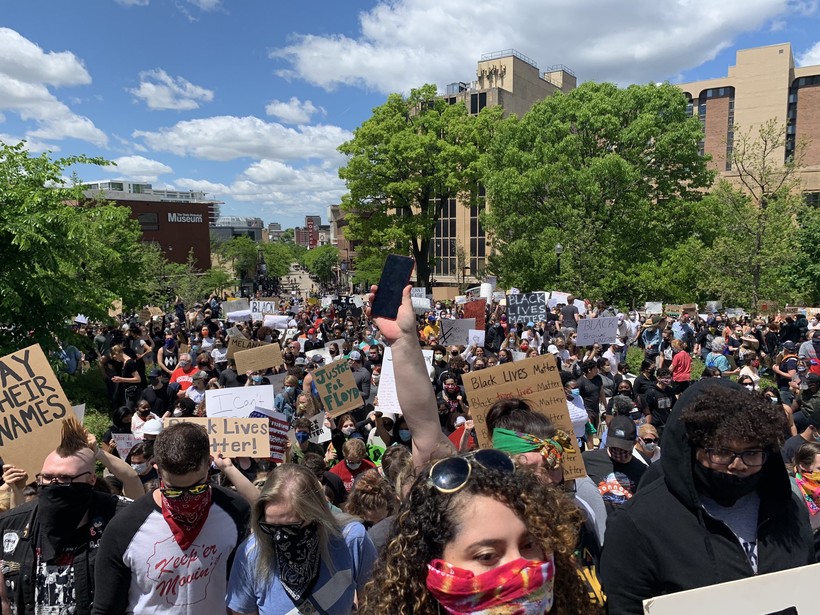 Protesters gathered near the state Capitol in Madison on Saturday, May 30, 2020 to demonstrate against the death of George Floyd in Minneapolis. Bridgit Bowden/WPR

Participants Weigh Risks Of COVID-19 Against Desire To Speak Out
By Shamane Mills
Share:

Large protests always carry a degree of risk, but big gatherings during a pandemic make the decision to go or stay home especially difficult.

This weekend, Milwaukee and Madison joined cities nationwide in holding large demonstrations seeking justice for the death of George Floyd, a black Minneapolis man who died in police custody after an officer knelt on his neck.

But in the midst of the coronavirus pandemic, gathering in large crowds to spread a message of equity and social justice also means that participants ran the risk of also spreading or contracting COVID-19.

Still, Lynn Lee felt he had no choice to go to Saturday’s rally in Madison. He wanted his 13-year-old daughter to hear about racial injustice from those who have experienced it. Lee is white. His adopted daughter is Mexican and African American. 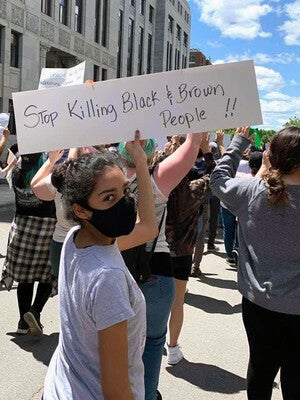 Lynn Lee's daughter, 13, wears a mask during a Madison protest against police violence Saturday, May 30, 2020. Lee said it was an important for his daughter to see demonstrations against the death of George Floyd, a Minneapolis man who died while in police custody, even though he was concerned about contracting COVID-19. Photo courtesy of Lynn Lee

"It was a dilemma whether or not to go to the march. On the one hand, it felt incredibly important to take her and have the hard discussion and support the issue," said the 54-year old Lee. "But on the other hand, as a single parent this pandemic has made me very anxious about getting sick."

At the last minute, Lee decided to go. He and his daughter put on face masks. They tried to stay away from others. When they got home, they took the additional precaution of immediately changing clothes and washing hands.

But while there have been peaceful daytime demonstrations in both Madison and Milwaukee, there have also been multiple recent nights of chaos, with hundreds taking to the streets, damaging property and clashing with police, despite new temporary curfews and existing municipal orders limiting outdoor gatherings to 50 people.

It was not something health officials wanted to see. But it’s something Jeanette Kowalik, Milwaukee’s commissioner of health understands.

"We’re telling people (to) practice social distancing and other preventive measures, but I think people are (so) tired of fighting and tired of being devalued and dehumanized that they’re willing to take a risk," said Kowalik.

Many demonstrators wore masks, but Kowalik said some weren’t wearing them correctly; only their mouth was covered, not their nose.

Being outside is supposed to reduce the chance of contracting the respiratory illness. But it depends on the circumstances.

"Being outdoors might reduce your risk, but being in a protest where people are shouting and talking loudly — that might put more virus in the air. So, it’s really about staying physically distant from others and wearing a mask, so in case you’re sick and don’t know it, you reduce the chances of transmitting it to others," said Patrick Remington, professor emeritus of public health at the University of Wisconsin-Madison School of Medicine and Public Health.

The disease is believed to be spread primarily through droplets when someone talks, coughs and sneezes. The latter are physical reactions to tear gas, which has been used by law enforcement in both cities to disperse crowds.