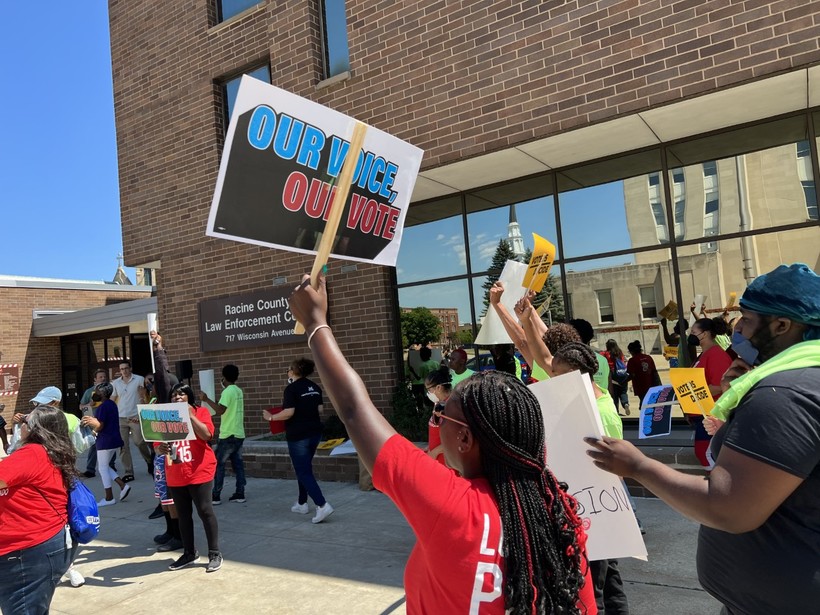 A woman holds a sign outside of the Racine County Sheriff's Office on Tuesday, August 2, 2022. Protesters met there to call for the removal of Racine County Christopher Schmaling, who declined to charge a man who illegally requested absentee ballots. Evan Casey/WPR

The Wisconsin Department of Justice is now handling the investigation
By Evan Casey
Share:

Protesters are calling for the Racine County Sheriff to investigate and recommend criminal charges against a man who admitted to illegally requesting absentee ballots in the name of prominent public officials last week.

A group of about 30 protesters gathered in front of the sheriff's office in downtown Racine Tuesday afternoon, many carrying signs and calling for Sheriff Christopher Schmaling to resign, angered because Schmaling had previously said he would not arrest Dover resident Harry Wait for the scheme.

Wait admitted to illegally requesting the absentee ballots, but he said he did so to uncover a flaw with the MyVote Wisconsin website.

Mose Fuller, a reverend with St. Timothy Community Baptist Church in Milwaukee, said it's the sheriff's duty to investigate those who break the law.

Kyle Johnson, an organizer with Black Leaders Organizing for Communities, said he also decided to attend the protest to hold the sheriff accountable.

"We shouldn't need to be standing here. We shouldn't have to ask our elected officials to enforce and follow the law. That's ludicrous," he said.

Now, the Wisconsin Department of Justice is investigating the incident, according to a spokesperson.

The Wisconsin Elections Commission also held a special meeting about the incident, with some members calling for Wait to be criminally charged. The commission released a statement on July 28, which stated, "There is no indication of any vulnerability with the MyVote application."

On Tuesday, Wait said he had received five ballots back, including Mason's. He said he hadn't received a ballot from Vos yet, but he also couldn't remember how many ballots he requested.

Wait said he received the ballot of state Rep. Elijah Behnke, a Republican from Oconto. However, Wait said he didn't request that specific ballot.

"The Sheriff’s Office requested the Attorney General’s Office investigate this matter because it is a state-wide problem with state-wide implications," said Lt. Michael Luell, the public information officer for the sheriff's department.

Luell also said Wait sent Schmaling and others an email notifying them of his actions and where he was in case he was to be arrested. A press release indicated Wait and Schmaling had a phone conversation last week in which the sheriff said he would not be arresting the Dover resident.

The press release said Schmaling instead responded with "hell, no" when Wait asked if the sheriff was going to arrest him.

"Criminal arrests, where police physically place a citizen in handcuffs, are made after thorough investigations and the formulation of probable cause. Criminal arrests are not based upon late-night Emails and requests to be arrested," the press release said.

The WEC has maintained that there's no indication of vulnerability on the MyVote website.

"Claiming that by committing a crime by submitting false information to obtain an absentee ballot somehow reveals a vulnerability of our system is inaccurate and irresponsible," WEC Administrator Meagan Wolfe said in a statement.

"The WEC and your local clerk are continually monitoring for any unlawful activity and working with state and federal authorities to investigate any and all attempts to break the law regarding access to absentee ballots," Wolfe added.