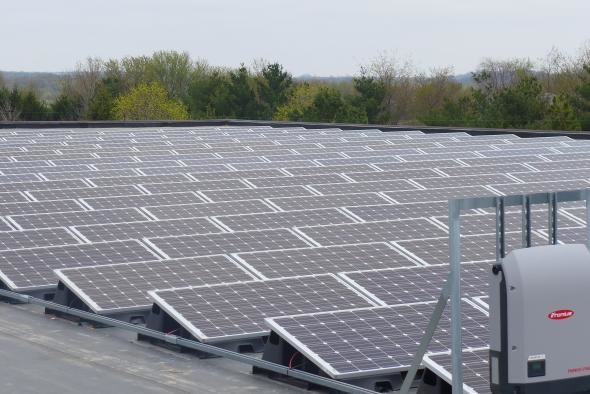 The proposed 2017 Dane County budget from county executive Joe Parisi would triple the county's production of solar power and create a new department to oversee energy and climate change. This electronic billboard would be powered by solar energy from rooftop panels on nearby county-owned buildings on the Alliant Energy Center grounds. Shamane Mills/WPR

Parisi wants to spend $2 million on solar panels to be placed atop the Dane County Job Center and on the roofs of county fairground buildings in 2017. County officials estimate electricity savings of $87,000 the first year. The county already has solar panels at the Dane County Regional Airport and its highway garage.

The two projects, combined with existing county panels, would be the largest publicly-owned solar array in Wisconsin.

"We have no coal in the state. We have no oil. And we have no natural gas. Yet almost all of our energy expenditures rely on those technologies," Huebner said. "That means we spend almost $16 billion a year, we send $16 billion a year out of our state's economy to buy those fuels."

By the end of 2016, the county will have 75 cars, trucks and snowplows running on natural gas — a third of the entire fleet.

"This is the cleanest transportation fuel available," Parisi said. "Even more so than electric cars because, as we know in our region, much of our electricity is generated by coal-fired power plants."