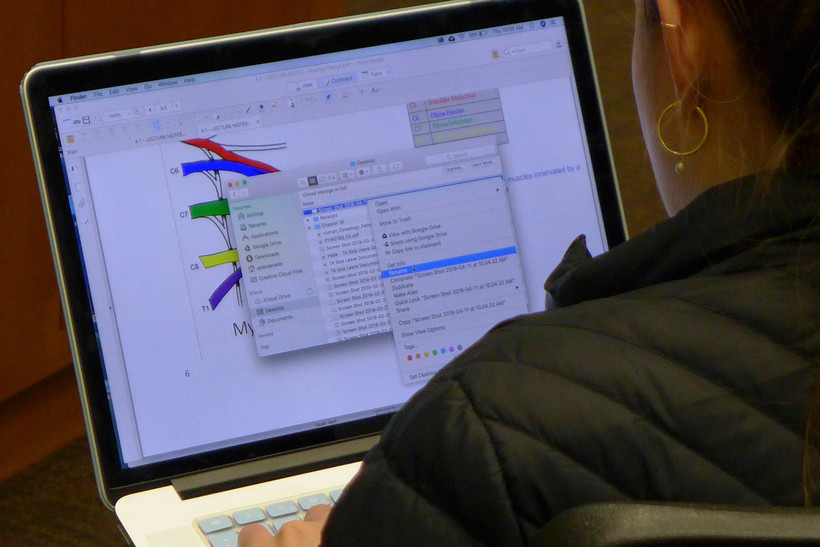 In an effort to engage students more in class, some University of Wisconsin-Madison courses have students use their computer to click on the answer. It’s a way the university promotes use of technology instead of focusing on how it can be a distraction for students tempted to look at social media, music and movie sites during class. Shamane Mills/WPR

Technology was supposed to transform learning, but in some ways, it can be an impediment. This is especially the case in large lecture halls where students can be easy to tune out and play a video game or even watch a movie.

At Purdue University, services like Hulu, Netflix, Pandora and iTunes are blocked on the campus WiFi. Not everywhere, just in classrooms and other academic spaces. It wasn't done so much to keep students focused on course work but rather to prevent them from sucking up precious bandwidth.

"Our focus is to make sure WiFi is available for academic purposes. Last year, (we) had complaints about not being able to connect, or it was slow especially in large lecture halls of 450 seats and more," said Mark Sonstein, executive director of IT Infrastructure Services at Purdue.

The university began blocking five streaming services in four lecture halls as a pilot in fall 2018 and expanded it campus-wide in the spring. The only feedback the IT department received was from professors who wanted to access the streaming sites, not students, Sonstein said. 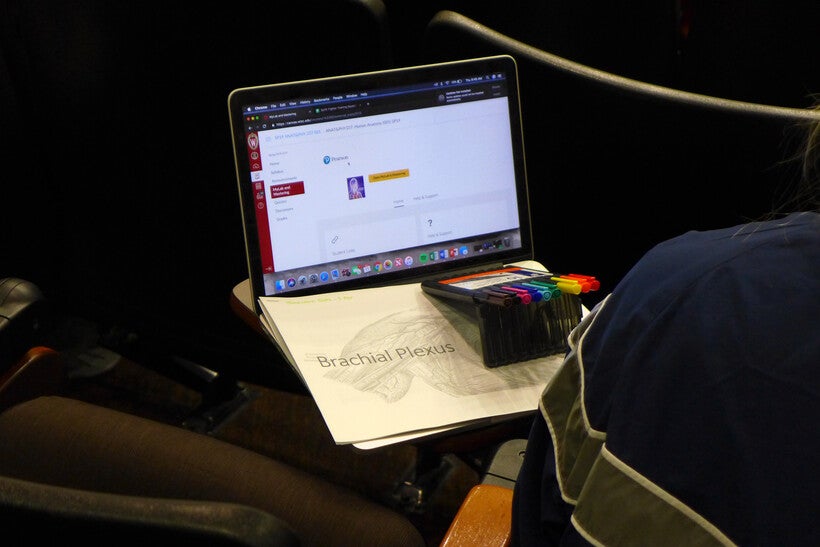 Students study which nerves control particular muscles in the body during an introductory anatomy class at UW-Madison earlier this spring. Students have the choice to draw on paper or using their computer. Shamane Mills/WPR

Whether it's concern over bandwidth or classroom distractions, universities across the country have come to grips with technology in different ways.

The University of Wisconsin-Madison hasn’t blocked streaming websites on its campus WiFi, but there’s an effort to increase engagement and attendance in large lecture classes through what's called the REACH program — Redesigning for Active Learning in High-Enrollment Courses.  The program started in 2016.

The change isn’t widely accepted by all instructors but UW-Madison Professor Julie Stamm, who is used to teaching lab classes, was game.

This past semester, Stamm taught an introductory REACH course on human anatomy that had several hundred students in it.

"I came in and I was like, 'Yes, let's do it!' So for me it didn’t take any convincing. I was all in. It was just a transition in learning. You have to learn how to teach like this," she explained.

Through the program, instructors are given suggestions by experts in learning on how to keep student’s attention. Classes in the program have less lecturing and more group work. Some of it is on a computer where students answer so-called "clicker questions" on their screen. 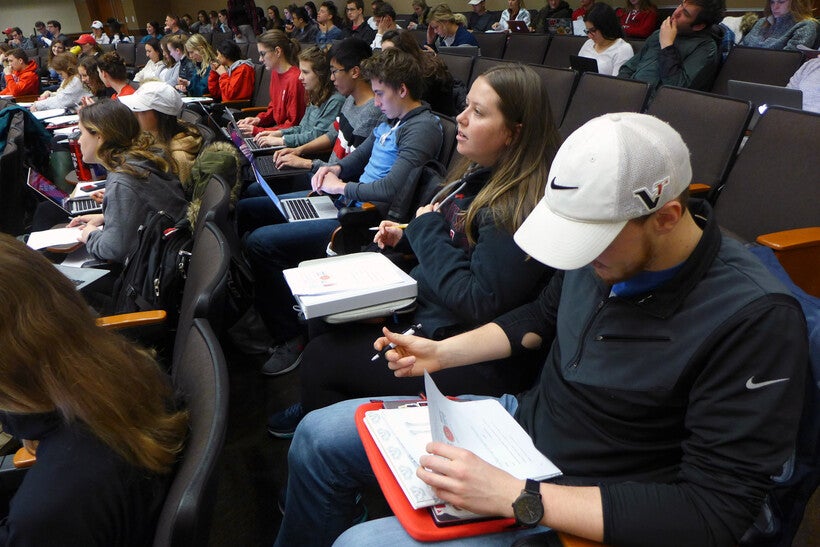 UW-Madison students Alex Cooney reads class materials while Erin Henley considers solutions to questions on a large screen at the front of the room. Shamane Mills/WPR

In the large lecture hall where Stamm teaches, students sit closer to the front of the room; there's no one allowed in the balcony. On the lower level, students sit every other row so teaching assistants can roam the room and answer questions.

"The student doesn’t always know how helpful the class was until later and they realize, 'Oh, I actually remember a lot of this,'" said Stamm. "I’ve gotten emails from students who are now in physical therapy or physician assistants or nursing school who are reflecting back and saying, 'Wow, am I glad I took this class.' And that’s the goal. We want them to be extremely prepared when they get to their next step." 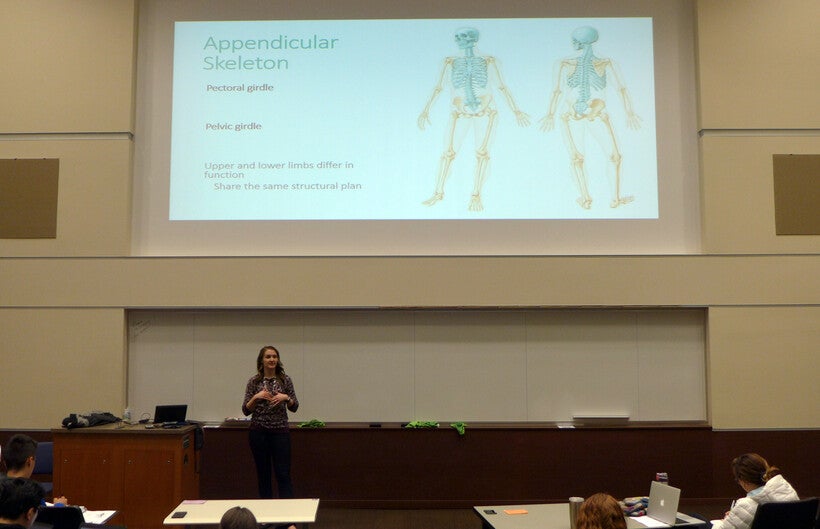 But hard as teachers try, they often have competition in the classroom: digital devices offer a lot of distractions — Instagram. Facebook. Snapchat. Music and video sites. It is, after all, a room of college students and the fear of missing out, or FOMO, can be strong.

"It’s hard for a lot of us to, like, to disconnect even if it is just for a lecture period," Kaylie Nytes said. 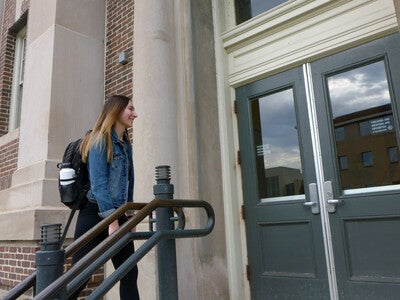 Nytes, from Kaukauna, was a junior when she took Stamm’s anatomy class this spring. The fast pace didn’t allow her time to check Facebook or watch movies. But that doesn’t mean she wasn’t tempted.

Because social media is designed to be accessible and convenient, Nytes said it’s available even when you probably shouldn’t be looking at it.

"A lot of people have computers that you can also text on your computer now too," she said. "In class I take notes on my computer so it’s hard not to take a peek at that when you’re sitting in class."

And that’s what many instructors are up against. Is their PowerPoint or lecture as interesting as, say, the latest "Game Of Thrones" episode?

Before Purdue University restricted what websites students could access in class, the IT department determined most of what students were looking at or listening to wasn’t related to class. A 2016 analysis of large lecture halls in the university’s life science building found just 4 percent of internet traffic over the campus network was from academic sites, Sonstein said. 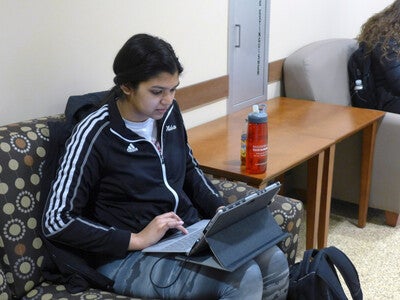 Nikita Patel, a UW-Madison student, looks over notes on her computer before an anatomy class in spring 2019. Shamane Mills/WPR

"In the past, I’ve had lectures where professors will just read off of slides. That’s not very engaging, so students might check social media," said Nikita Patel, also a junior in Stamm’s anatomy class this spring. "But in this class instructors encourage us to talk to each other and TA’s ask students to explain what they’re thinking, whether it’s right or wrong."

In the spring semester, UW-Madison had 20 REACH courses. Since the program started, 17,000 students have taken such courses. And in some classes, attendance has risen from below 50 percent to 80 or 90 percent, said Vice Provost for Teaching and Learning Steven Cramer.